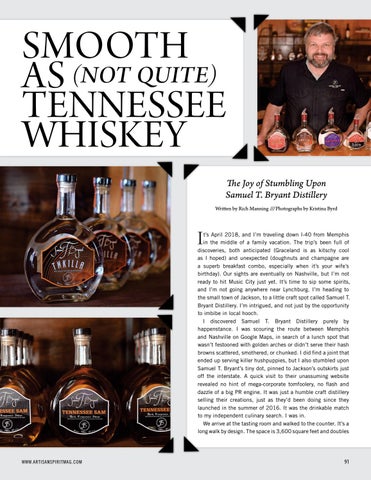 SMOOTH AS (not quite) TENNESSEE WHISKEY The Joy of Stumbling Upon Samuel T. Bryant Distillery Written by Rich Manning ///Photographs by Kristina Byrd

t’s April 2018, and I’m traveling down I-40 from Memphis in the middle of a family vacation. The trip’s been full of discoveries, both anticipated (Graceland is as kitschy cool as I hoped) and unexpected (doughnuts and champagne are a superb breakfast combo, especially when it’s your wife’s birthday). Our sights are eventually on Nashville, but I’m not ready to hit Music City just yet. It’s time to sip some spirits, and I’m not going anywhere near Lynchburg. I’m heading to the small town of Jackson, to a little craft spot called Samuel T. Bryant Distillery. I’m intrigued, and not just by the opportunity to imbibe in local hooch. I discovered Samuel T. Bryant Distillery purely by happenstance. I was scouring the route between Memphis and Nashville on Google Maps, in search of a lunch spot that wasn’t festooned with golden arches or didn’t serve their hash browns scattered, smothered, or chunked. I did find a joint that ended up serving killer hushpuppies, but I also stumbled upon Samuel T. Bryant’s tiny dot, pinned to Jackson’s outskirts just off the interstate. A quick visit to their unassuming website revealed no hint of mega-corporate tomfoolery, no flash and dazzle of a big PR engine. It was just a humble craft distillery selling their creations, just as they’d been doing since they launched in the summer of 2016. It was the drinkable match to my independent culinary search. I was in. We arrive at the tasting room and walked to the counter. It’s a long walk by design. The space is 3,600 square feet and doubles