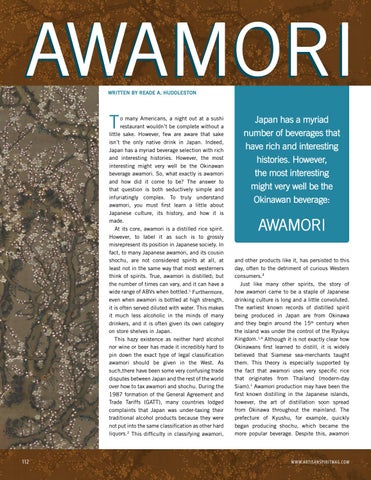 AWAMORI WRITTEN BY READE A. HUDDLESTON

o many Americans, a night out at a sushi restaurant wouldn’t be complete without a little sake. However, few are aware that sake isn’t the only native drink in Japan. Indeed, Japan has a myriad beverage selection with rich and interesting histories. However, the most interesting might very well be the Okinawan beverage awamori. So, what exactly is awamori and how did it come to be? The answer to that question is both seductively simple and infuriatingly complex. To truly understand awamori, you must first learn a little about Japanese culture, its history, and how it is made. At its core, awamori is a distilled rice spirit. However, to label it as such is to grossly misrepresent its position in Japanese society. In fact, to many Japanese awamori, and its cousin shochu, are not considered spirits at all, at least not in the same way that most westerners think of spirits. True, awamori is distilled; but the number of times can vary, and it can have a wide range of ABVs when bottled.1 Furthermore, even when awamori is bottled at high strength, it is often served diluted with water. This makes it much less alcoholic in the minds of many drinkers, and it is often given its own category on store shelves in Japan. This hazy existence as neither hard alcohol nor wine or beer has made it incredibly hard to pin down the exact type of legal classification awamori should be given in the West. As such,there have been some very confusing trade disputes between Japan and the rest of the world over how to tax awamori and shochu. During the 1987 formation of the General Agreement and Trade Tariffs (GATT), many countries lodged complaints that Japan was under-taxing their traditional alcohol products because they were not put into the same classification as other hard liquors.2 This difficulty in classifying awamori,

Japan has a myriad number of beverages that have rich and interesting histories. However, the most interesting might very well be the Okinawan beverage:

AWAMORI and other products like it, has persisted to this day, often to the detriment of curious Western consumers.3 Just like many other spirits, the story of how awamori came to be a staple of Japanese drinking culture is long and a little convoluted. The earliest known records of distilled spirit being produced in Japan are from Okinawa and they begin around the 15th century when the island was under the control of the Ryukyu Kingdom.1,4 Although it is not exactly clear how Okinawans first learned to distill, it is widely believed that Siamese sea-merchants taught them. This theory is especially supported by the fact that awamori uses very specific rice that originates from Thailand (modern-day Siam).1 Awamori production may have been the first known distilling in the Japanese islands, however, the art of distillation soon spread from Okinawa throughout the mainland. The prefecture of Kyushu, for example, quickly began producing shochu, which became the more popular beverage. Despite this, awamori