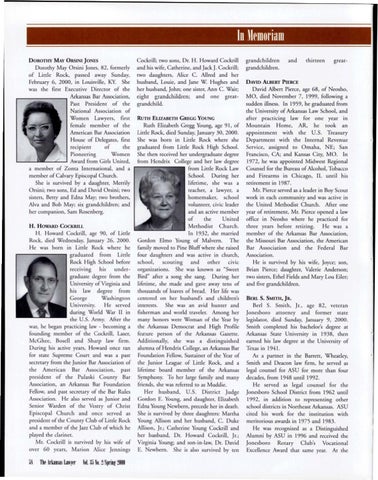 Dorothy May Orsini Jones, 82, formerly of Little Rock, passed away Sunday, February 6, 2000, in Louisville, KY. She was the first Executive Director of the ~ Arkansas Bar Association, Past Presidem of the adonal Association of Women Lawyers, first female member of the American Bar Association House of Delegates, first recipienr of the Pioneering Women '---_---I Award from Girls United, a member of Zanca International, and a member of Calvary Episcopal Church. She is survived by a daughter, Merrily Orsini; two sons, Ed and David Orsini; two sisters, Betty and Edna May; twO brothers, Alva and Bob May; six grandchildren; and her companion, Sam Rosenberg. H. HOWARD CoCKRIll

H. Howard Cockrill, age 90, of Little Rock, died Wednesday, January 26, 2000. He was born in Little Rock where he graduated from Little Rock High School before receiving his undergraduate degree from the University of Virginia and his law degree from George Washington University. He served during World War II in the U.S. Army. Afrer the war, he began practicing law - becoming a founding member of the Cockrill, Laser, McGhee, Bosell and Sharp law firm. During his active years, Howard once ran for state Supreme Coun and was a past secretary from the Junior Bar Association of the American Bar Association, past president of the Pulaski Counry Bar Association, an Arkansas Bar Foundation Fellow, and past secretary of the Bar Rules Association. He also served as Junior and Senior Warden of the Vestry of Christ Episcopal Church and once served as president of the County Club of Little Rock and a member of the Jazz Club of which he played the clarinet. Mr. Cockrill is survived by his wife of over 60 years, Marion Alice Jennings

Ruth Elizabeth Gregg Young, age 91, of Lirtle Rock, died Sunday, January 30, 2000. She was born in Little Rock where she graduated from Little Rock High School. She then received her undergraduate degree from Hendrix College and her law degree from Little Rock Law School. During her lifetime, she was a teacher, a lawyer, a homemaker, school volunteer, civic leader and an active member of the United Methodisr Church. In 1932, she married Gordon Elmo Young of Malvern. The family moved to Pine Bluff where she raised four daughters and was active in church, school, scouting and other civic organizations. She was known as "Sweet Bird" afrer a song she sang. During her lifetime, she made and gave away tens of thousands of loaves of bread. Her life was cemered on her husband's and children's interests. She was an avid hunter and fisherman and world traveler. Among her many honors were Woman of the Year by the Arkansas Democrar and High Profile fearure person of the Arkansas Gazette. Additionally, she was a disringuished alumna of Hendrix College, an Arkansas Bar Foundation Fellow, Sustainer of the Year of the Junior League of Little Rock, and a lifetime board member of the Arkansas Symphony. To her large family and many friends, she was referred to as Muddie. Her husband, U.S. District Judge Gordon E. Young, and daughÂŤr, Elizabeth Edna Young Newbern, precede her in death. She is survived by rnree daughters: Martha Young Allison and her husband, C. Duke Allison, Jr.; Catherine Young Cockrill and her husband, Dr. Howard Cockrill, Jr.; Virginia Young; and son-in-law, Dr. David E. ewbern. She is also survived by ten

David Albert Pierce, age 68, of Neosho, MO, died November 7, 1999, following a sudden illness. [n 1959, he graduated from the University of Arkansas Law School, and after practicing law for one year in Mountain Home, AR, he took an appointment with the U.S. Treasury Department with the Internal Revenue Service, assigned to Omaha, E; San Francisco, CA; and Kansas City, MO. In 1972, he was appoimed Midwest Regional Counsel for the Bureau of Alcohol, Tobacco and Firearms in Chicago, IL until his retirement in 1987. Mr. Pierce served as a leader in Boy Scout work in each community and was active in the United Methodist Church. Afrer one year of retirement, Mr. Pierce opened a law office in Neosho where he practiced for three years before retiring. He was a member of the Arkansas Bar Association, the Missouri Bar Association, the American Bar Association and the Federal Bar Association. He is survived by his wife, Joyce; son, Brian Pierce; daughter, Valerie Anderson; two sisters, Ethel Fields and Mary Lou Eiler; and five grandchildren. BERL S. SMITH, JR.

Berl S. Smith, Jr., age 82, veteran Jonesboro anomey and former state legislaror, died Sunday, January 9, 2000. Smith completed his bachelor's degree at Arkansas Stare University in 1938, then earned his law degree at the University of Texas in 1941. As a partner in the Barrett, Wheatley, Smith and Deacon law firm, he served as legal counsel for ASU for more than four decades, from 1948 umil 1992. He served as legal counsel for the Jonesboro chool District from 1962 until 1992, in addition to representing other school districts in Northeast Arkansas. ASU cired his work for the institution with meritorious awards in 1975 and 1983. He was recognized as a Distinguished Alumni by ASU in 1996 and received the Jonesboro Rotary Club's Vocational Excellence Award that same year. At the