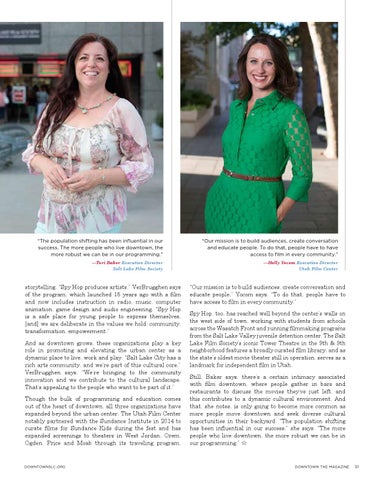 “The population shifting has been influential in our success. The more people who live downtown, the more robust we can be in our programming.”

“Our mission is to build audiences, create conversation and educate people. To do that, people have to have access to film in every community.”

storytelling. “Spy Hop produces artists,” VerBrugghen says of the program, which launched 15 years ago with a film and now includes instruction in radio, music, computer animation, game design and audio engineering. “Spy Hop is a safe place for young people to express themselves, [and] we are deliberate in the values we hold: community, transformation, empowerment.” And as downtown grows, these organizations play a key role in promoting and elevating the urban center as a dynamic place to live, work and play. “Salt Lake City has a rich arts community, and we’re part of this cultural core,” VerBrugghen says. “We’re bringing to the community innovation and we contribute to the cultural landscape. That’s appealing to the people who want to be part of it.” Though the bulk of programming and education comes out of the heart of downtown, all three organizations have expanded beyond the urban center. The Utah Film Center notably partnered with the Sundance Institute in 2014 to curate films for Sundance Kids during the fest and has expanded screenings to theaters in West Jordan, Orem, Ogden, Price and Moab through its traveling program.

“Our mission is to build audiences, create conversation and educate people,” Yocom says. “To do that, people have to have access to film in every community.” Spy Hop, too, has reached well beyond the center’s walls on the west side of town, working with students from schools across the Wasatch Front and running filmmaking programs from the Salt Lake Valley juvenile detention center. The Salt Lake Film Society’s iconic Tower Theatre in the 9th &amp; 9th neighborhood features a broadly curated film library, and as the state’s oldest movie theater still in operation, serves as a landmark for independent film in Utah. Still, Baker says, there’s a certain intimacy associated with film downtown, where people gather in bars and restaurants to discuss the movies they’ve just left, and this contributes to a dynamic cultural environment. And that, she notes, is only going to become more common as more people move downtown and seek diverse cultural opportunities in their backyard. “The population shifting has been influential in our success,” she says. “The more people who live downtown, the more robust we can be in our programming.” I 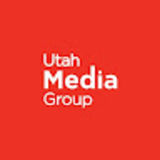