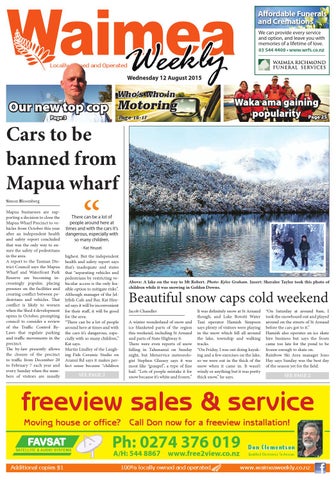 Affordable Funerals and Cremations We can provide every service and option, and leave you with memories of a lifetime of love. 03 544 4400 • www.wrfs.co.nz

Cars to be banned from Mapua wharf

Simon Bloomberg Mapua businesses are supporting a decision to close the Mapua Wharf Precinct to vehicles from October this year after an independent health and safety report concluded that was the only way to ensure the safety of pedestrians in the area. A report to the Tasman District Council says the Mapua Wharf and Waterfront Park Reserve are becoming increasingly popular, placing pressure on the facilities and creating conflict between pedestrians and vehicles. That conflict is likely to worsen when the Shed 4 development opens in October, prompting council to consider a review of the Traffic Control ByLaws that regulate parking and traffic movements in the precinct. The by-law presently allows the closure of the precinct to traffic from December 20 to February 7 each year and every Sunday when the numbers of visitors are usually

There can be a lot of people around here at times and with the cars it’s dangerous, especially with so many children. - Kat Heusel.

highest. But the independent health and safety report says that’s inadequate and states that “separating vehicles and pedestrians by restricting vehicular access is the only feasible option to mitigate risks”. Although manager of the Jellyfish Cafe and Bar, Kat Heusel says it will be inconvenient for their staff, it will be good for the area. “There can be a lot of people around here at times and with the cars it’s dangerous, especially with so many children,” Kat says. Martin Lindley of the Laughing Fish Ceramic Studio on Aranui Rd says it makes perfect sense because “children

Above: A lake on the way to Mt Robert. Photo: Kylee Graham. Insert: Sheralee Taylor took this photo of children while it was snowing in Golden Downs.

Beautiful snow caps cold weekend Jacob Chandler A winter wonderland of snow and ice blanketed parts of the region this weekend, including St Arnaud and parts of State Highway 6. There were even reports of snow falling in Tahunanui on Sunday night, but Metservice meteorologist Stephen Glassey says it was most like “graupel”, a type of fine hail. “Lots of people mistake it for snow because it’s white and frozen.”

It was definitely snow at St Arnaud though, and Lake Rotoiti Water Taxi operator Hamish Simpson says plenty of visitors were playing in the snow which fell all around the lake, township and walking tracks. “On Friday, I was out doing kayaking and a few exercises on the lake, so we were out in the thick of the snow when it came in. It wasn’t windy or anything but it was pretty thick snow,” he says.

“On Saturday at around 8am, I took the snowboard out and played around on the streets of St Arnaud before the cars got to it.” Hamish also operates an ice skate hire business but says the frosts came too late for the pond to be frozen enough to skate on. Rainbow Ski Area manager Jono Hay says Sunday was the best day of the season yet for the field. 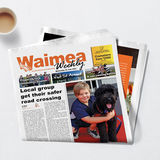