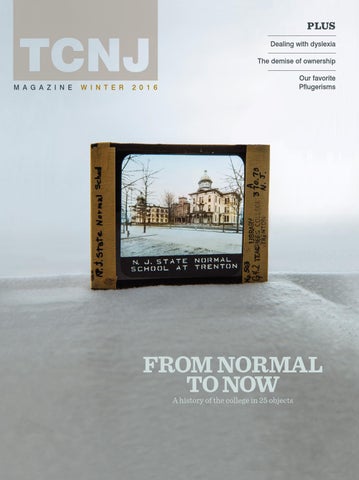 PLUS Dealing with dyslexia The demise of ownership

THE COLLEGE OF NEW JERSEY

It would be a fool’s errand to attempt to tell the complete history of TCNJ within these pages. Instead, we scoured campus to find artifacts whose stories reveal some facet of institutional history. Considered together, these objects provide an eclectic—though by no means encyclopedic—view of the life of the college.

URN PRESENTED TO JAMES M. GREEN After graduating from this institution in 1870, Green returned as principal (the equivalent of president) in 1889. He would hold that post for 28 years. During his first decade in office, he tightened admission standards during a period of increasing enrollment, added faculty, expanded the curriculum, and improved the schoolâ&amp;#x20AC;&amp;#x2122;s infrastructure. In 1899, the faculty presented him with this urn, which features an inscription thanking him for his commitment to the school.

LEAVES OF GRASS FIRST EDITION When Walt Whitman’s masterpiece was published in July 1855, Ralph Waldo Emerson called it “the most extraordinary piece of wit and wisdom that America has yet contributed.” Such high praise didn’t stop Whitman from continually revising the work throughout the rest of his life. There are about 200 first editions of Leaves still in existence. The college acquired this one in 1985 and added it to the library’s collection as the 500,000th volume. The “Inscription” on the left in the photo is a one-page original manuscript of Leaves of Grass, handwritten by Whitman.

The library archives house a collection of glass lantern slides depicting student life, campus buildings, and faculty and administrators from the college’s early days. Hasbrouck, the school’s fourth principal, served from 1876 to 1889, and according to one chronicler of institutional history, he was “an efficient administrator though thoroughly unspectacular.” Nevertheless, intrigue surrounded his departure from the school. Editors of a now-defunct Trenton newspaper, The Daily True American, were convinced Hasbrouck had been forced into retirement. “There is no doubt that the displacement of Dr. Hasbrouck…was largely due to the trickery and underhand plot of [Charles] Fuller,” state superintendent of schools, they wrote.

From fall 1855 to spring 1857, Larison recorded in this notebook her experiences as a member of the first class of this institution, which was then called New Jersey State Normal School. Interspersed with lengthy accounts of the lectures she attended and instruction she received are complaints about having to attend vocal music classes. “Will I ever be clear of this most tiresome exercise which does me no good whatever?…I think they ought to find out soon that I cannot sing.” The administration finally relented, allowing her to instead spend that hour of class time drawing.

1949 FOOTBALL Those who saw it happen called it the extra point heard around the sports world. On Nov. 10, 1949, freshman Bob Zardus ’55 kicked this ball through the uprights to give the college a 7-6 lead over Montclair. The Lions held on for the victory, ending what was then the longest winless streak in collegiate football history: a 0-40-3 run that stretched back to 1938. Media outlets across the country carried news of the win.

CLASS OF 1899 ARTIFACTS In March 1979, Eleanor Jane Rittenhouse of Vancouver, British Columbia, mailed these items to President Clayton Brower along with a handwritten note that read in part, “It is very sad how many things end up in waste baskets instead of where they belong.” The items, which were meticulously labeled, had belonged to Rittenhouse’s mother, Florence Susan Spragg, an 1899 Normal School graduate. On the left and right are Class Day programs for the Normal and Model schools, respectively. The women pictured along the top were Spragg’s classmates: from left to right, Martha Bennett Sherman, Sara Elizabeth Croasdale, and Sarah Ethelyn Conover Klein. In addition to the tickets (top right) is an invitation (center) to the 1899 Normal School commencement exercises that Spragg had sent to Thomas Earl Rittenhouse, the man she married in 1905. Thomas did not attend because of a serious illness, his daughter’s notes indicated.

GREEN HALL CLOCK HAND This is one of the original hands installed on the clock face as construction of Green Hall was being completed in 1931. It stood watch over Quimby’s Prairie until earlier this decade, when it was replaced while the building underwent a refurbishment. It now hangs in a display case in the president’s office.

ROY VAN NESS’ BLAZER Facing page: A 1943 graduate of the college, Van Ness served as athletic director from 1964 to 1987, and is widely credited with bringing the college’s athletics program to the forefront of Division III sports. His blazer is on permanent display in a trophy case in Packer Hall.

RADIOTHON POSTERS During WTSR’s first Radiothon, held in April 1973, 40 students mounted a continuously live 67-hour broadcast that featured performances from local bands, guest appearances by Philadelphia DJs, and a folk festival held in Rhodora Theatre—all in the name of charity. By 1980, the station’s marathon fundraiser had become a four-day affair that The Signal dubbed “the greatest show on campus.” Radiothon’s location and duration changed throughout the years, but its format and focus—live music, crazy contests, and pledge drives and auctions to benefit local nonprofits— remained the same.

FRESHMAN BEANIES “Hey frosh, square that dink!” From at least the 1930s through 1970, freshmen were required to wear a beanie, or dink, during the first week of fall classes. Freshmen were at the mercy of upperclass students during this initiation period, and could be made to perform virtually any silly task—counting the cement blocks in front of Green Hall, for example. The beanies couldn’t be removed until after a de-dinking ceremony at week’s end. By the 1960s, the ceremonies often ended with freshmen getting their revenge. In 1968, for example, freshmen threw the sophomore class officers into the lake.

THE MACE The mace, which was designed by Professor Emeritus Robert C. Burns, symbolizes the authority of the college president and is carried by the grand marshal in the academic procession at commencement. The wood is from a piece of furniture that was used at the original campus, and the names of the college’s principals and presidents are set into the shaft.

Special thanks to the following individuals for their assistance with this article: Maureen Gorman and Marlena Frackowski, TCNJ Library; Kevin Potucek, WTSR; Joe Galante ’07 and Kelly Williams ’93, athletics; and Heather Fehn ’94, the president’s office.

1979 NCAA DIVISION III NATIONAL CHAMPIONSHIP TROPHY The Lions edged SUNY–Brockport by three-quarters of a point— 77.75 to 77—to finish first at the 1979 Div. III Wrestling Tournament. But the victory might not have happened if the team’s equipment manager, Tom “Monk” Isaac ’79, hadn’t caught a scoring error by the officials. Monk told Head Coach Dave Icenhower about the mistake, the bout sheet was corrected, and the Lions brought home the college’s first NCAA title.