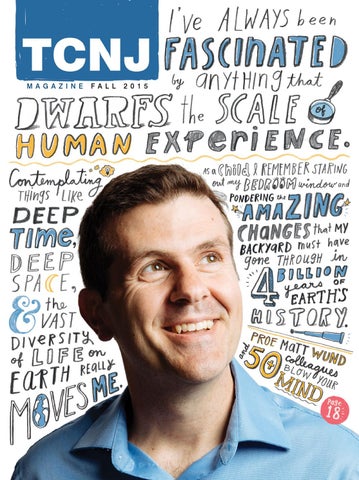 They’re mum about complex questions that make faculty pull the duvet over their heads in the middle of the night. They’re all zipped lips about the mad pursuit of a result within reach. But mostly they give nothing, absolutely nothing away about the fluid and intense intellectual curiosity that characterizes our faculty. We’re here to remedy that. Turn the page.

Mind Mapping Throughout the year, faculty lead short-term study abroad programs. Here are a few such journeys. THE MAGIC OF ARCHIVAL RESEARCH IN CORNWALL Faculty: Michele Lise Tarter, English Inspiration: Her decades-long study of the archives in Cornwall’s Museum of Witchcraft. Student takeaway: Delve into centuries-old manuscripts by and about witches, the earliest healers, and connect with the past in meaningful ways. Stay in Tintagel, the birthplace of King Arthur; have class discussions in Merlin’s Cave; hike in Druid forests.

THE NATURAL HISTORY OF THE GALÁPAGOS ISLANDS AND ECUADOR Faculty: Donald Lovett, biology Inspiration: Lovett always marveled at how much Charles Darwin gleaned from his observations on the Galápagos Islands. Student takeaway: Read Darwin’s works, observe the same things he did, and then come to an appreciation of how evolution explains the existence of the unique species on these islands.

HISTORY OF APARTHEID IN SOUTH AFRICA Faculty: Matthew Bender, history; Mindi McMann, English Inspiration: Bender’s desire to transform the South African history course he’s been teaching on campus into an immersive experience abroad and McMann’s interest in the narratives and ethics of reconciliation. Student takeaway: Understand what apartheid was and witness how its effects reverberate today.

First Seminar* courses allow faculty to explore topics and themes outside their discipline. Can you match the course below to the professor who teaches it? Answers are on page 26. (No peeking!) COURSE

A. The Beatles and Their World Changes in pop music and society during the Fab Four’s heyday

B. Trenton Makes Music The region’s contributions to the music that set the world dancing

D. Dance as an Art Form: From Ballet to Jookin The development and influences of dance

E. Economics and Everything A range of timely topics examined through the lens of economic theory

F. Does What We Eat Matter? The Culture, Politics, and Science of Food How our mealtime choices affect the world around us G. The Cultural Phenomenon of Harry Potter From Beowulf to the boy wizard, an examination of literary heroes

The path to professorship can be circuitous.

THIS PAGE: OCHS, AMTZIS, AND PEARLSTEIN ILLUSTRATIONS BY JULIE McLAUGHLIN

Amtzis attended film school and worked in the

Pearlstein came to TCNJ after a long career in the

Celtic literature at Harvard before completing a PhD

industry through his 20s, even starting a casting

high-tech sector, during which he accumulated

in physics from Brandeis. “I basically always followed

company. But as he approached 30, stability

60 patents. After earning a PhD in electrical

what I thought was the most interesting thing to do,”

beckoned. He tried his hand as a chef, but says the

engineering at Princeton in 1987, he became vice

he says. That approach led him to a large defense

president of engineering at BioAutomation, where

contractor, a solar energy company, and a lab where he

quickly.” A friend told him about working as a special

reader. While at Hitachi, he chaired the

research on cancer at the Fox Chase Cancer Center

he says. He taught (and was later principal) at a

in Philadelphia and Johns Hopkins School of

therapeutic community for kids with drug and

standard for North America. After that, he looked

Medicine in Baltimore. In 2013 he arrived at TCNJ,

alcohol problems. A doctorate in curriculum and

to make another transition. He knew about TCNJ

instruction followed, and then, in 2005, an offer from

because his wife had received a nursing certificate

computational statistical methods for refining our

here. “So I knew what a terrific school it was,” he

I was supposed to do.”

says. “I am really thrilled to be teaching here.”

Inquiring Minds Here’s the TCNJ course these professors would take if given carte blanche.

Mathematics and Statistics I took History of Jazz with Michael Conklin. I got to study a subject I know little about, and witness a great teacher with a passion for his subject.

Art and Art History Cynthia Paces’ Global Struggles for Social Justice It’s been 25 years since the fall of Communism in Central and Eastern Europe and the Tiananmen Square uprising. Examining what impact those events have had on history would be fascinating.

Biology Deborah Hutton’s Arts of the Islamic World I love art of all types and want to know more about the Islamic world given the current state of political affairs.

Elementary and Early Childhood Education Elizabeth Borland’s Visualizing (In)equality I’ve always been interested in how photography has been and can be used to study human activity.

A Course Not (Yet) Taken

KEVIN H. MICHELS, Marketing and Interdisciplinary Business Artificial Intelligence. I developed the School of Business’ Center for Innovation and Ethics, and while AI presents unrivaled innovation opportunities, it also presents ethical questions. Will AI eliminate jobs? Or alienate us from our work?

Music Cultures and Canons with Piper Kendrix Williams I study African-American culture, and it would be fascinating to learn from someone whose expertise is in the literary canon of the black community.

English I’d study 20th-century German history with Cynthia Paces, because I’m interested in the social and political problems of Weimar and Nazi Germany, and the nature of authoritarian regimes. I’d also take any class with Jo Carney, who has a reputation among students as “the best.” I’d love to learn from her how to be a better teacher.

Sociology and Anthropology Any Asian art history class with Deborah Hutton I want to hear her amazing lectures and see the diverse images she shows in class. Her History of Photography course also sounds fascinating.

History Jo Carney’s Shakespeare class Recently, I read Hilary Mantel’s Wolf Hall and Bring up the Bodies—modern novels set in Shakespeare’s time—and Jo explained what Mantel was doing with language. My colleague has a warmth and enthusiasm for literature, and I would love to see Shakespeare through her eyes.

English Introduction to Astronomy with Thulsi Wickramasinghe For me, the best part of Boy Scouts was getting my merit badge in astronomy. I’m ready to plunge anew into the wonders of the night sky.

English Michael Robertson’s The Utopian Tradition in Western Literature I want to expand students’ worldviews on race, class, and justice, and my colleague’s course, in which TCNJ students take class alongside prisoners, would immediately help complicate their perspectives.

BENNY CHAN, chemistry Woodworking. I recently discovered that the engineering school has a course to design woodworking projects and train in the machine shop. I haven’t taken any of these courses since middle school and would love to get back into it.

English Any course taught by Jo Ann Gross (history), because I’d learn a good deal about our ever-changing global landscape and because she epitomizes TCNJ’s notion of the teacher-scholar.

NINA PEEL, Biology Calculus. I neglected math in high school, which was a bad idea. My research students keep encouraging me to take some classes, and I just might when I get time.

There’s no denying the multidimensional talents of TCNJ’s faculty. THE FICTION-WRITING FORENSIC CHEMIST Professor John Allison had been writing short stories, plays, and monologues for decades when he published his selfdescribed “quirky” first novel, Saturday Night at Sarah Joy’s, in 2013. An avid boater who enjoys sailing Barnegat Bay, Allison donated royalties from the book to Hurricane Sandy relief. “Some people might look at what I write and roll their eyes, but to me it’s an academic endeavor to create something new,” says Allison.

THE GREEN-THUMBED SOPRANO Being a master gardener isn’t unlike being a college professor, says Associate

require a love of learning, research, and

guitar at age 9, and later earned a college

degree in it. He’s performed in Greece

and the U.S., but plays only for fun these

crops, and critters, and our information

must come from reputable, science-

Sebastian Bach. “Anyone who plays

based sources,” she says. “Educating

music at some point falls in love with

ourselves and the community is our

Bach,” says Papamichail. “His music is

very playful, the way it hides a melody and then revives it. That ingenuity hasn’t been matched since.”

Wagner sings tenor in The Bach Choir of

Bethlehem, Pennsylvania, and has toured

been fencing for 53 years, competes in

tournaments in the U.S. and Canada; last

ensemble, the oldest such choir in the

winter he won silver in the men’s foil in the

U.S. “After a day of teaching, grading,

experiments, singing is a release for me,”

THE SCENE-STEALING MATHEMATICIAN Associate Professor Cathy Liebars has been acting, singing, and dancing in theater productions for so long that she jokingly calls it her “second career.” She’s picky about what roles she’ll take. “Ultimately I want to learn something from the parts I play,” says Liebars. Take, for example, her recent role as Hermann Goering’s wife in a staged reading of

2: Goering at Nuremberg. “I got to study

and exciting, fulfilling and strenuous.”

German accents and research that period of history.”

I go to class with a professor. How Socratic is that?

In the Interdisciplinary Faculty-Student Research Seminar, a professor and a student pair up to explore topics around a theme (this past semester, five pairs tackled “Justice”). Once a week, sustained by bagels and juice, the pairs settle in around a conference table as equal partners in freewheeling discussions of their work. We asked collaborators Steven Thompson ’15 and Michael Robertson, professor of English, what the experience is like. ROBERTSON: The seminar has been extraordinary in bringing everybody in contact with people with different perspectives. I, or somebody else, will bring up an issue and Steven will point out, “Well, that’s true from a middle-class perspective. But if you’re poor in this country, your experience is going to be different.” THOMPSON: The thing I love about the seminar is that in terms

of discussion, nothing is off limits. When we start a conversation it can go in any direction and you don’t have to worry about people being uncomfortable or, more importantly, about people being uninformed. Everybody in that room is very intelligent and, above all, eminently curious.

ROBERTSON: What you identified there is that lack of hierarchy where the professor is the authority and everyone else is the learner. In the justice seminar, we’re all learners. THOMPSON: If you have a

ROBERTSON: This seminar is about exposing and illuminating different ideas about justice. It’s not about bringing people toward one, true theory. It’s about a lively, intellectual debate that does not have an easy resolution. It is the most democratic academic space I’ve ever been in. The only comparison I can make: I spent my last sabbatical as a visiting fellow in the Department of Religion at Princeton University, and my only duty was to participate in a weekly seminar of professors and graduate students. This seminar is completely equivalent to the one at Princeton.

—as told to Dustin Racioppi

THIS PAGE: ILLUSTRATION BY JULIE McLAUGHLIN

disagreement with somebody [in the seminar], especially with a professor, you can just

go at it for 20 minutes. And generally the way that breaks down is, nobody emerges a clear winner, but everyone has their understanding of the issue tempered. You are forcibly moderated in the literal meaning of that word. You are left with a more moderate perspective because people force you to look at aspects of an issue that you were not willing to consider before.