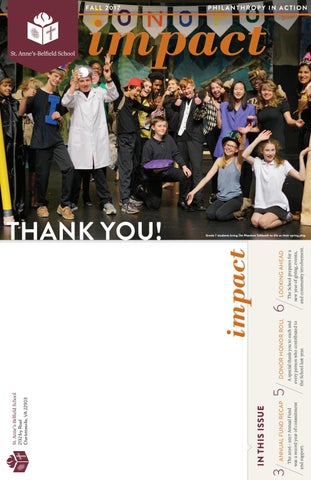 A special thank you to each and every person who contributed to the School last year.

The School prepares for a new year of giving, events, and community involvement.

Grade 7 students bring The Phantom Tollbooth to life as their spring play.

ANOTHER YEAR OF GROUNDBREAKING IMPACT Dear Friends &amp; Fellow Donors, As the chair of the parent Annual Fund effort for both this school year and last, I’d like give a huge thanks to everyone for making the 2016 - 2017 fundraising efforts such a success. The statistics, summaries, and honor rolls on the following pages speak for themselves, showing the great pride and ownership that we all take in creating and sustaining this amazing School that we proudly call ours. As an alumna, I’m thrilled to see our children enjoying the same traditions, games, campuses, and even some of the same teachers as I did when I was a student. And yet, I am even more excited by all the change that I see: student choice in programs, increased diversity in the student body, and an emphasis on community outreach and service. None of these things that make our community so exceptional happen on their own; they are intentionally crafted and nurtured, and they are not possible without the collective resources that we provide.

Thank you for your support which continues to make St. Anne&#39;s-Belfield an incredible place to be a student, faculty member, and alumnus. Sincerely,

PHILANTHROPY HIGHLIGHTS FROM OUR YEAR

Other (Including Faculty &amp; Former Parents)

Established as a tribute to the class with the

highest percentage of donors to the Annual

Weeks, who served as assistant headmaster,

Fund. The cup is named for Pamela Malone,

a beloved teacher who dedicated 34 years to

role model, and counselor for students

enriching the lives of St. Anne’s-Belfield School and teachers alike between 1961 - 1981. The students. This year’s award is given to the

participation from the classes of the 1970s and 1980s. The winner of the this year’s Peter

Murray ‘65, who with her family has given

generously of her time, talent, and treasures

Recognizes the class within 14 years of

for decades. The award is given to the reunion

graduation having the greatest level of

class with the largest total gift. This year’s

participation in the Annual Fund. The Young

Randolph Murray Bowl is awarded to the

Alumni Participation Award is given to the

The Molly and Robert Hardie Family 1)

Mr. and Mrs. Matthew B. McClellan

The All Saints Club Head’s Circle

Mr. and Mrs. A. Dandridge

Friends of the School

The Reverend Katharine B. Chase

Mr. and Mrs. Joseph A. Masri

Mr. and Mrs. George A. Morris

Dr. and Mrs. Igor A. Shumilina

Thank You! We would like to express our deep appreciation to last year’s Annual Fund Committee who helped the School realize its ambitious fundraising goals:

RESTRICTED CURRENT-USE &amp; CAPITAL GIFTS Donors provided $4,727,516 to support specific current-use needs and capital projects. These restricted gifts provide tremendous support to allow the School to achieve specific objectives outside what might be possible through the School’s operating budget. Some of the uses for the donations include: Arts Boosters Athletics Boosters Auction 2016 Boarding Fund Centennial Scholarship Class of 1966 Pavers Coding Initiative Curricula &amp; Other Doug&#39;s Trip

Mr. and Mrs. Ronald B. Hass

Mr. and Mrs. A. Pendleton DuPuis

The Margaret and Frank Stinchfield Foundation

Mr. and Mrs. Dennis B. Nordstrom

Ralph and Genevieve B. Horween Foundation

Mr. and Mrs. Joseph A. Masri

Fund Spotlights The Raise We Our Voices campaign launched in 2016 to raise funds for teaching excellence and student access. Below we have spotlighted three exciting funds about which our students and donors are passionate. If you are interested in learning more about how you can contribute to or become involved in these initiatives, please contact Bruce Cauthen, director of leadership giving, at bcauthen@stab.org.

St. Anne’s-Belfield added Singapore Math, a globally renowned mathematics teaching method, to its curriculum in 2013 as a result of gifts from a small number of donors. Implementation necessitated hiring four Singapore Math specialists. Sara Kronstain, Grades K - 6 Mathematics Department head, reports that “the vast majority of students show genuine excitement about math because they are challenged, and also have experienced success.” Initial gifts have underwritten the Singapore Math curriculum, but ongoing support is needed for recurring and additional costs of the program.

Students have been reaping the benefits of the Computer Science Initiative, introduced throughout Grades K - 12 in 2014, through the generosity of a lead gift and subsequent matching gifts. Kim Wilkens and Zach Minster, co-directors of the program, have integrated computer science into every aspect of the School and led students to explore the world of technology, not only in the classroom, but also through a number of internships, conferences, and events, including the annual SPARK! Hackathon and Girls Geek Day. The School is approximately halfway through raising $625,000 toward a challenge gift for the Coding &amp; Computer Science Initiative.

Alumnus Chris Long ‘04 and wife Megan have made a significant gift and commitment in support of financial aid. The Chris Long Scholarships will provide two members of the Boys &amp; Girls Clubs of Central Virginia full scholarships to St. Anne’sBelfield School for seven years, Grade 6 through Grade 12. Initial funding for the scholarships will be donated from Long’s first six game checks of the 2017 NFL season as a member of the Philadelphia Eagles. The School is truly thankful for this commitment by an alumnus and looks forward to welcoming the Long scholars to campus next year.

GROWTH IN GIVING SOCIETIES In 2016 - 2017, participation in giving societies grew significantly. Each giving society celebrates an important way donors can make an impact at the School. We are pleased to welcome the following individuals into their respective societies.

The Sustainer&#39;s Society celebrates donors who have given a gift to the School for 20 or more consecutive years. Following the 2016 - 2017 school year, we gratefully acknowledge Reverend Anne Koehler, Ms. Meghan R. Murray &#39;93 &amp; Mr. Steven Bowers, and Mr. and Mrs. Robert Schwagerl, Jr. for their loyalty and for achieving 20 years of consecutive giving.

Mr. and Mrs. Philmore B. Anderson

Honor &amp; Memoriam Gifts During the past year, numerous donors made gifts to the School in honor of or in memory of students, alumni, and faculty. Gift honorees are presented below, with each donorâ&amp;#x20AC;&amp;#x2122;s name shown in italics.

Family and friends of Robin Fray &#39;72 gathered to dedicate a newly installed bench on the Greenway Rise Campus in front of the Lee-DuVal Dining Hall in honor of her life and time at the School.

Professional Development 2017: Defining Teaching Excellence Our professional development budget is supported by gifts to the Annual Fund, restricted Teaching Excellence funds, and recent biennial auctions. This allows us to invest $200,000 annually into the continued education and leadership of our teachers. Our professional development budget allows for teachers to participate in these opportunities at no cost to themselves with all travel and meal expenses, as well as conference fees, covered by the School. Our faculty professional development program makes St. Anne’s-Belfield School truly exceptional. Through professional development, our faculty demonstrate lifelong learning to our students and lead by example. They bring back new ideas to implement in their classrooms and continuously grow and improve. They are sought-after presenters and leaders in their disciplines who share ideas with other educators to improve the educational experience for children everywhere. Thanks to your generosity, we are pleased to highlight a selection of the professional development opportunities made possible for our faculty in 2017: Robin Albertson-Wren, Presenting “Cultivating Joy Through Mindful Awareness” VAIS Leading Learning Conference 2017, Richmond, VA

*Participated in all four Learn to Learn workshops

LOOKING AHEAD Our Annual Fund benefits every student by providing approximately $1,600 per child, beyond tuition and other revenue, which can be used for programmatic and material expenses. That&#39;s why it is so important for each family to contribute at a level that is meaningful to them. Last year, 74 percent of parents made a contribution to the Annual Fund. We continuously strive for 100 percent parent participation.

• The parent Annual Fund drive will run from early October through November. Typically, 60 percent of parents have made their gift or pledge during this time frame, although a gift can be made at anytime before June 30, 2018. • Each family will be contacted by a fellow parent or member of the development team during the drive who will offer to answer questions and encourage your participation in the Annual Fund. • You can designate your Annual Fund gift to one of six main areas: Academics, Arts, Athletics, Financial Aid, Teaching Excellence, or Area of Greatest Need.

SAVE THESE DATES Join us on campus for these exciting events, including two Inspiration Speaks presentations! Fall 2017

Several times a year, St. Anne&#39;s-Belfield School hosts innovators and visionaries from around the world as part of our Inspiration Speaks series. Challenging and thought-provoking, these speakers bring myriad ideas to the School and local community and encourage discourse on a variety of topics related to teaching, learning, education, and growth.

Erika Christakis is an early childhood educator and New York Times best-selling author of The Importance of Being Little: What Preschoolers Really Need From Grownups. Formerly on the faculty of the Yale Child Study Center, she has written and consulted widely about child development from preschool through the college years, drawing on her experiences as a teacher, preschool director, and college administrator. Christakis&#39; work has been featured in media such as The Atlantic, The Washington Post, Salon, NPR, and The Wall Street Journal, and for two years she wrote a column for TIME.com.

Stemming from a deep interest in what prevents humans from leading meaningful, fulfilling lives, New York Times bestselling author Julie Lythcott-Haims has written books on multiple topics, including both parenting and racism. Her first, How to Raise an Adult: Break Free of the Overparenting Trap and Prepare Your Kid for Success, takes on the harm of &quot;helicopter parenting,&quot; and her second, Real American, examines the thousand small cuts racism imposes on African-Americans. She is also known for her TedTalk on &quot;How to Raise Successful Kids.&quot; Lythcott-Haims&#39; holds a Bachelor of Arts in American Studies from Stanford University, a Juris Doctorate from Harvard Law School, and an Master in Fine Arts in writing from California College of the Arts.

Thank You from the Development &amp; Alumni Relations Team! The Office of Development and Alumni Relations would like to extend their personal thanks to each of the donors listed in this issue without whom the experiences and opportunities our students and teachers access every day would not be possible. We are grateful for the opportunity to build and nurture relationships with donors and volunteers across the School community in order to advance the mission and strategic goals of St. Anne’s-Belfield School. We invite you to contact a member of our team at anytime to engage further in your relationship with our School. Contact information can be found at www.stab.org/support/meet-the-team.

While an e-version of Impact has always been made available to our entire community, we are pleased that we can now provide an annual, printed copy to all of our donors, faculty, and parents.

We have made every effort to ensure that this report is accurate. If you discover an error, please accept our apology and contact us so we may update our records. Thank you! 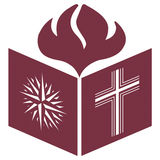