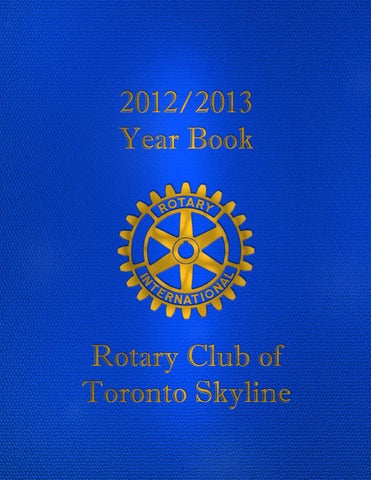 A Message From Kevin Quan “It makes me very happy to see Skyline have such a successful second year. It takes a special group of people to achieve so much in a short span of time. I am very proud of the commitment level my fellow members have demonstrated. When we started the club I was worried that nobody would want to come every week for a meeting. I was so surprised to find out that not only did members want to see each other every Tuesday but that we often found ways to interact on the other days also! Thank you all for being my fellow Rotary members. It’s not just a club, this is my life here.” Kevin Quan Past-President, Rotary Club of Toronto Skyline

Skyliner Meetings RCTS meets every Tuesday at the Office Pub (John &amp; Adelaide) in downtown Toronto. Every week, Skyliner’s are treated to pub fare, $5 steam whistle pints and best of all: great company! Our weekly meeting starts with a Merry Minute, where we share in each other’s personal triumphs and good news. We celebrate new jobs, graduations, promotions, big wins, births, moves, project completions, and much more. After we take care of business, we have had a multitude of guest speakers that have informed and educated us on a WIDE variety topics. We heard about where we are in the Rotary Community form district representatives; about the great work that Rotary Foundation does and how we contribute; and received great advice from our fellow Rotarians. We figure out where we are in the International community when we meeting people that tell us their stories, like the Canadian soldier serving in Afghanistan to the university student that took it on to fix Healthcare in Ghana. We’ve had lighter topics where we heard about the art of bee-keeping, cooking and photography tips, and had some tears when we heard from Miyeon Kim, a North Korean refugee and Joanne Lindsey, a Torontonian who told us her story of how she got and lives with AIDs. We look forward when we hear predictions of how urban car ownership will change our lifestyles from AutoShare President and what a 3-D printer does. Even our members have taken on the speaking role: Steven made taxes fun, Julie &amp; Aaron shared their experiences in Tanzania; Sarah B &amp; Amber translated Social Media and Jin updated us on our STEP Cambodia project. But if that wasn’t enough, Skyliner’s are required to do a “QWIKI” – which is a 5 minute presentation on any random topic: Puggles, Cows, How to Order a Coffee, How to Order Wine; the Danish Royal Family, Italy, Ireland, Aerosmith and Toronto Through the Years have been some of the first.

New Members A very special welcome to the newest members of the Rotary Club of Toronto Skyline.

Charter Night A New Club on the 7070 Block The Rotary Club of Toronto Skyline was officially chartered as a Rotary International Club in District 7070. A ceremonial dinner was held on June 19th, 2012 involving RCTS members, visiting members from a number of other clubs in the Toronto area and family and friends; 65 members and guests attended the dinner at the Hard Rock Cafe Toronto to celebrate the occasion. Among the notable guests were 7070 District Governor Mr. Bob Wallace (RC Port Hope) and Dr. Robert Scott (RC Coburg), former Rotary Foundation Chair and current PolioPlus Chair. The Rotary Club of Toronto was RCT Skyline’s Charter Sponsor. They gifted the Rotary Bell which will ring the start of the RCTS’ weekly meetings. As well, a number of other Rotary Clubs across the district celebrated with RCTS and came bearing thoughtful and useful gifts for the start-up club. We thank all the clubs that contributed to our first year! The evening featured all Charter Members being issued their Rotary lapel pins, which bear the iconic Wheel Emblem and identify the wearer as a member of Rotary International

Skyline in #7070 On Saturday April 27th, 2013, in a galaxy far, far away, the Rotary Club of Toronto Skyline participated in the Trump Aids Poker Walk. Proceeds from this event went towards the war on HIV/AIDS through education, prevention, treatment, support for orphans, surviving guardians and people living with AIDs. In addition, communities stricken by HIV/AIDS will be assisted in overcoming shortages of drinking water, food or shelter, essential for recovery and a sustainable future. 17 members of Toronto Skyline walked as team Skywalkers on the boardwalk of Ashbridges Bay. To go with the Star Wars theme, the team walked with Star Wars T-shirts, light sabers and a dog in a Princess Leia costume! During the walk we witnessed a few light saber battles between the Rebel Forces and Galactic Empire.

Skyline Out In The Community Out of the Cold Program for 2013! RCTS Rotarians enjoy participating in the St. Andrew’s Out of the Cold Program in the winter. Once a month, RCTS sends at least 3 volunteers to help serve and clean up a delicious meal, usually for about 300 guests! The last meal of the season proved to be a very busy night with 280 guests being served vegetable soup, beef brisket with onion gravy, mashed potatoes and gravy, mac and cheese, green salad and for dessert bread pudding, apple crisp and pie. The total number of guests served this year was 5,732.

Inside Ride Riding bikes outdoors, going nowhwere, but making progress…what’s that you say? Yes, it’s The Inside Ride fundraiser for children with cancer. RC Toronto Skyline took part in this event at downtown Toronto’s Dundas Square. The RCTS raised $555.00 total.

Fort York Foodbank Every third Saturday of the Month, the RCTS brigade heads to Fort York Food Bank to cook a delicious meal to those in need in the west end of Toronto. Armed with fresh food, the team uses their culinary creativity to impress the patrons of this establishment that is now part of the Rotary family.

Chrismas Caroling and Gift Wrapping On a rainy December Sunday afternoon 10 Skyliners gathered to spread some Christmas cheer by singing Christmas songs to residents and staff at the E.W. Bickle Centre in west end Toronto. The Centre is part of the Toronto Rehab system and includes many patients who require complex care. Rotary Club of Toronto Skyline volunteered to wrap gifts for children with the St. Albanâ&amp;#x20AC;&amp;#x2122;s Boys and Girls Club. The gifts were all donated by the community and there were a lot of great items! Skyliners do Christmas right!

Sky Battle Sky Battle benefit concert and battle-of-the-bands presented by The Rotary Club of Toronto Skyline (RCTS) was held on January 17th of 2013 at the Hard Rock Café Toronto. The bands that rocked were: 1. Camel Tones 2. The Jones 3. Maoláin (just say “Mullen”) 4. Cousin Rufu The ultimate winner was Maoláin, who were awarded the headlining musical slot at the upcoming 2nd Annual Toronto Wing Fest, presented by RCTS, on May 10th. Sky Battle netted proceeds in 4-figures that RCTS will send to STEP Cambodia’s WAter, Sanitation, and Hygiene (“WASH”) program. Completion of the WASHprogram will enable over 1,500 primary and secondary students in the Lveate area (a small village in Cambodia’s Kampong Cham province) to have access to clean drinking water and sanitation facilities, including toilets.

International: RCTS In The World STEP Cambodia STEP Cambodia is the main international service project that our club supported this year, which built washrooms in a school at the Lveate School. Prior to our involvement, this school had no sanitation facilitates for 550 students, and children were at risk for water borne illness, female students would miss school during menstruation, and children would leave school to go to the bathroom. Now, there are modern facilities for both boys and girls and their teachers.

Kipera Water Project The Kipera Water Project was conceived in the summer of 2012 as the result of a visit from Skyline Rotarians Julie Caron and Aaron Miller. During their visit, Julie and Aaron delivered water and sanitation seminars to the village. The Kipera Water Project addresses two areas of focus of the RI Foundation, ‘Disease Prevention and Treatment’ and ‘Water and Sanitation’, through the implementation of two large water storage tanks (10 000 L each); one at each end of the village of Kipera and serves 400 people. It was the villagers themselves who designed the project, including paying a small amount for the water to ensure sustainability. The ground-up approach to this project is something that makes it both unique and likely to succeed and the result is that villagers will have access to uncontaminated water at a reasonable distance from their homes and for a reasonable price. Rotarians Rick and Julie Caron from RC Windsor (1918) and RC Toronto Skyline respectively were in Tanzania to implement the project.

Are you smarter than a Skyliner? RCTS Jeoparody! Answer: RCTS Jeoparody. Question: How do you simultaneously raise money while having a blast? Since 2012, Skyliners get together to play a trivia game in the likeness of the hit show “Jeopardy.” Categories ranged from “At the Fort York Foodbank” to “Geographical Rotary”. We raised a total of $240 to be donated to the Kipera water project – The installation of a water tank in a rural village in Tanzania. We are proud that we’re simultaneously able to raise money whilst having a blast. RCTS Holds First Trivia Night! The RCTS held its first Trivia Night on Friday Feb 15th at the McVeigh’s Irish Pub, downtown Toronto! The event was well attended at the upper level of the club, for 2 hrs of fun-packed really random trivia in 5 categories – pop culture, food, sports, geography and wild card!!! There were lots of fantastic prizes too….a door prize of wine, 50/50 ticket sales (winner was $155 richer!) as well as 1st and 2nd prizes for the top 2 Trivia teams! The winning team (led by our RCTS Member, Steve!) walked away with $25 LCBO gift cards and $10 Tim Hortons gift cards to the 2nd prize team members! After the exciting &amp; sometimes controversial Trivia night (somehow there were a lot of questions re: Indonesia!)….the RCTS Skybattle winner “Maoláin” performed their own songs as well as some rockin’ cover songs to end our night!! All and all, it was a great success and the Trivia night raised a gross total of $604.00 for Rotary Foundation causes!

Summarizing all the past events and achievements that the Skyliners have had this past year.