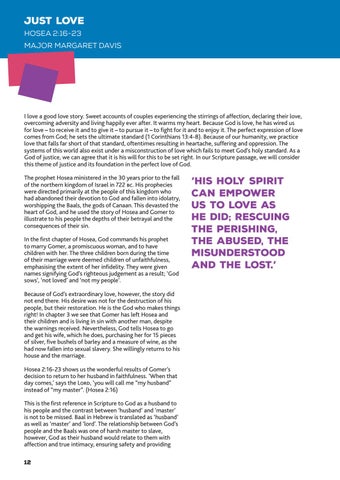 I love a good love story. Sweet accounts of couples experiencing the stirrings of affection, declaring their love, overcoming adversity and living happily ever after. It warms my heart. Because God is love, he has wired us for love – to receive it and to give it – to pursue it – to fight for it and to enjoy it. The perfect expression of love comes from God; he sets the ultimate standard (1 Corinthians 13:4-8). Because of our humanity, we practice love that falls far short of that standard, oftentimes resulting in heartache, suffering and oppression. The systems of this world also exist under a misconstruction of love which fails to meet God’s holy standard. As a God of justice, we can agree that it is his will for this to be set right. In our Scripture passage, we will consider this theme of justice and its foundation in the perfect love of God. The prophet Hosea ministered in the 30 years prior to the fall of the northern kingdom of Israel in 722 bc. His prophecies were directed primarily at the people of this kingdom who had abandoned their devotion to God and fallen into idolatry, worshipping the Baals, the gods of Canaan. This devasted the heart of God, and he used the story of Hosea and Gomer to illustrate to his people the depths of their betrayal and the consequences of their sin. In the first chapter of Hosea, God commands his prophet to marry Gomer, a promiscuous woman, and to have children with her. The three children born during the time of their marriage were deemed children of unfaithfulness, emphasising the extent of her infidelity. They were given names signifying God’s righteous judgement as a result; ‘God sows’, ‘not loved’ and ‘not my people’. Because of God’s extraordinary love, however, the story did not end there. His desire was not for the destruction of his people, but their restoration. He is the God who makes things right! In chapter 3 we see that Gomer has left Hosea and their children and is living in sin with another man, despite the warnings received. Nevertheless, God tells Hosea to go and get his wife, which he does, purchasing her for 15 pieces of silver, five bushels of barley and a measure of wine, as she had now fallen into sexual slavery. She willingly returns to his house and the marriage. Hosea 2:16-23 shows us the wonderful results of Gomer’s decision to return to her husband in faithfulness. ‘When that day comes,’ says the Lord, ‘you will call me “my husband” instead of “my master”. (Hosea 2:16) This is the first reference in Scripture to God as a husband to his people and the contrast between ‘husband’ and ‘master’ is not to be missed. Baal in Hebrew is translated as ‘husband’ as well as ‘master’ and ‘lord’. The relationship between God’s people and the Baals was one of harsh master to slave, however, God as their husband would relate to them with affection and true intimacy, ensuring safety and providing 12

‘His Holy Spirit can empower us to love as he did; rescuing the perishing, the abused, the misunderstood and the lost.’ 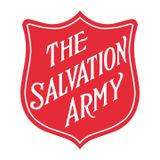