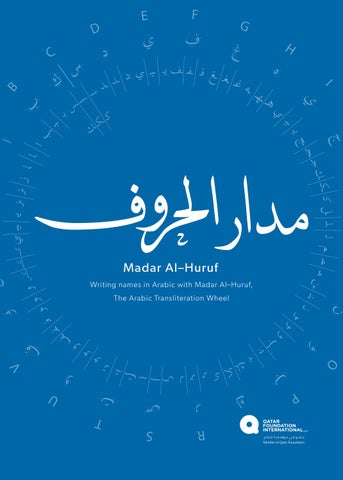 Type/Write Write your name as you usually would in English, but don’t capitalize it.

Sound out Rewrite your name as you sound it out. Focus on writing it how it sounds, not how it’s spelled. Don’t write any letters that aren’t pronounced.

The Arabic transliteration wheel is a rotatable wheel that matches

English letters and sounds to their Arabic phonetic counterparts.

It can be used as a tool to write English names in Arabic and to introduce users to the Arabic alphabet.

Turn Around Arabic is written from right to left, unlike English. Rewrite what you

Moneera Al–Badi, a graphic designer from Doha, Qatar and a

wrote in the Clip section, but from right to left. Your name probably

former Communications Fellow at QFI who graduated from Virginia

Washington, DC and Tucson, AZ to finalize the wheel’s design

wheel, and substitute the Arabic letter for each English letter. You can

also use the chart in this workbook to find corresponding Arabic letters.

Abdulkadhem and Nour Jandali, created the mini unit and student workbook, making the wheel a truly global endeavor. Fatima and

Write your name, making sure to connect the Arabic letters. Remember

Arabic, adapted from the book “Sugar Comes from Arabic:

to start writing from the right and go right–to–left! Read your name

A Beginner’s Guide to Arabic Letters and Words.”

aloud to make sure it sounds right.

Key Don’t capitalize your name when starting the strategy! Non-social letters (don’t connect to the left.)

THE TSCTSC STRATEGY PRACTICE Try it out

Write the “ph” how it sounds

Tip: Remember, the “r ” and “d” are non-social letters and don’t connect to the left in Arabic.

Tip: The “ch” sound is usually written as “tsh” in Arabic, but some people just write “sh”.

with the “a” letter: ‫أ‬

Without the ‫أ‬, Ethan would be pronounced “Yeethan”, and Emily would be

Writing names that begin with vowels (E, I, O, U) When writing a name that begins with E, I, O, or U, you will need to begin

“Ymily” This is because the vowel sounds are a little different in Arabic - think about the difference between the “a” in “apple” versus the “a” in “say”. At the beginning of a word in English, we put a little more emphasis on the “a” sound than in the middle of a word. Adding the ‫ أ‬adds that emphasis to words in Arabic.

Strategy and the Wheel.

Developed by Fatima Abdulkadhem and Nour Jandali, two Arabic teachers in Tucson, Arizona, this workbook was made possible through support and funding from Qatar Foundation International (QFI). A not-for-profit organization, QFI, LLC is a U.S.-based member of Qatar Foundation (QF) and is focused on grant-giving and programmatic activities that promote education as a force that facilitates collaboration across geographical, social and cultural boundaries. To learn more about QFI and Madar Al-Huruf, the Arabic Transliteration Wheel, please visit: www.qfi.org 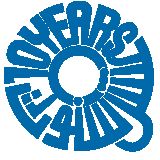