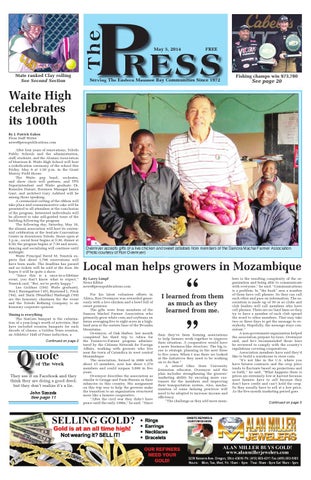 Timing is everything The SeaGate banquet is the culmination of a year-long’s worth of activities, that have included reunion banquets for each decade of classes, a Golden Years reunion, an Athletics’ Hall of Fame induction, a Continued on page 2

of The Week o

They see it on Facebook and they think they are doing a good deed, but they don’t realize it’s a lie. John Szozda See page 11

Overmyer accepts gifts of a live chicken and sweet potatoes from members of the Samora Machal Farmer Association. (Photo courtesy of Ron Overmyer)

Local man helps growers in Mozambique By Larry Limpf News Editor news@presspublications.com For his latest volunteer efforts in Africa, Ron Overmyer was rewarded generously with a live chicken and a bowl full of sweet potatoes. The gifts were from members of the Samora Machel Farmer Association who primarily grow white corn and soybeans on farms averaging five to eight acres in a highland area at the eastern base of the Bvumba Mountains. Overmyer, of Oak Harbor, last month completed his third trip to Africa for the Farmer-to-Farmer program administered by the Citizens Network for Foreign Affairs, working with growers who live near the town of Catandica in west central Mozambique The association, formed in 2008 with about 15 members, now has about 1,370 members and could surpass 5,000 in five years. Overmyer describes the association as similar to Grange and Farm Bureau in their infancies in this country. His assignment on this trip was to help the growers make the transition to an organization structured more like a farmers cooperative. “After the civil war they didn’t have peace until the early 1990s,” he said. “Since

After four years of renovations, Toledo Public Schools and the administration, staff, students, and the Alumni Association of Morrison R. Waite High School will host a rededication ceremony of the school this Friday, May 9 at 1:30 p.m. in the Grant Murray Field House. The Waite pep band, orchestra, and show choir will perform, and TPS Superintendent and Waite graduate Dr. Romules Durant, Business Manager James Gant, and architect Gary Ashford will be among those speaking. A ceremonial cutting of the ribbon will take place and commemorative cake will be presented to all attendees at the conclusion of the program. Interested individuals will be allowed to take self-guided tours of the building following the program The following day, Saturday, May 10, the alumni association will host its centennial celebration at the SeaGate Convention Centre in downtown Toledo. Doors open at 5 p.m., social hour begins at 5:30, dinner at 6:30, the program begins at 7:30 and music, dancing and socializing will continue until midnight. Waite Principal David M. Yenrick expects that about 1,700 reservations will have been made. The deadline has passed and no tickets will be sold at the door. He hopes it will be quite a show. “Since this is a once-in-a-lifetime event, you don’t know what to expect,” Yenrick said. “But, we’re pretty happy.” Leo Goldner (1941 Waite graduate), Don J. Baumgartner (’45), Raymond L. Frick (’64), and Darla (Wandtke) Harbaugh (’69) are the honorary chairmen for the event and the Toledo Refining Company is an honorary corporate sponsor.

then they’ve been forming associations to help farmers work together to improve their situation. A cooperative would have a more business-like structure. The big issue is strategic planning in the next three to five years. When I was there we looked at the initiatives they need to be working on to do that.” A retired Ohio State University Extension educator, Overmyer said the plan includes strengthening the growers’ marketing ability by securing more customers for the members and improving their transportation system. Also, mechanization of some farming practices will need to be adopted to increase income and efficiency. “The challenge as they add more mem-

bers is the resulting complexity of the organization and being able to communicate with everyone,” he said. “Communications is a problem. In “the bush” area a number of them have cell phones. So they can call each other and pass on information. The association is made up of 30 or so clubs and club leaders will call members who have cell phones. There are no land lines so they try to have a member of each club spread the word to other members. That may take two or three days to get the message to everybody. Hopefully, the message stays consistent.” A non-government organization helped the association prepare by-laws, Overmyer said, and he’s recommended those laws be reviewed to comply with the country’s regulations covering cooperatives. Association members have said they’d like to build a warehouse to store corn. “It’s not like in the U.S. where you have futures contracts and the crop price tends to fluctuate based on projections and so forth,” he said. “What happens there is prices are extremely low at harvest because most farmers have to sell because they don’t have credit and can’t hold the crop. So they usually have to sell at a low price. As the five-month marketing period goes Continued on page 3 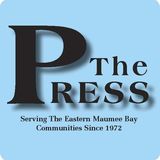