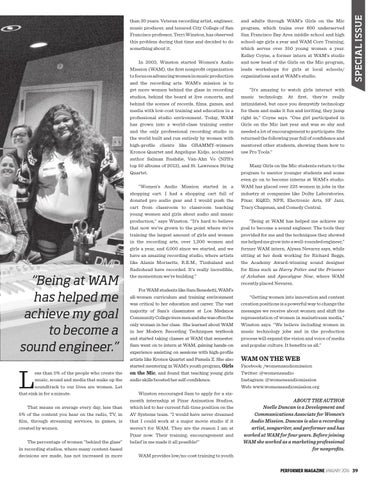 In 2003, Winston started Women’s Audio Mission (WAM), the first nonprofit organization to focus on advancing women in music production and the recording arts. WAM’s mission is to get more women behind the glass in recording studios, behind the board at live concerts, and behind the scenes of records, films, games, and media with low-cost training and education in a professional studio environment. Today, WAM has grown into a world-class training center and the only professional recording studio in the world built and run entirely by women with high-profile clients like GRAMMY-winners Kronos Quartet and Angelique Kidjo, acclaimed author Salman Rushdie, Van-Ahn Vo (NPR’s top 50 albums of 2013), and St. Lawrence String Quartet.

“Being at WAM has helped me achieve my goal to become a sound engineer.”

ess than 5% of the people who create the music, sound and media that make up the soundtrack to our lives are women. Let that sink in for a minute. That means on average every day, less than 5% of the content you hear on the radio, TV, in film, through streaming services, in games, is created by women. The percentage of women “behind the glass” in recording studios, where many content-based decisions are made, has not increased in more

“Women’s Audio Mission started in a shopping cart. I had a shopping cart full of donated pro audio gear and I would push the cart from classroom to classroom teaching young women and girls about audio and music production,” says Winston. “It’s hard to believe that now we’ve grown to the point where we’re training the largest amount of girls and women in the recording arts, over 1,200 women and girls a year, and 6,000 since we started, and we have an amazing recording studio, where artists like Alanis Morisette, R.E.M., Timbaland and Radiohead have recorded. It’s really incredible, the momentum we’re building.” For WAM students like Sam Benedetti, WAM’s all-women curriculum and training environment was critical to her education and career. The vast majority of Sam’s classmates at Los Medanos Community College were men and she was often the only woman in her class. She learned about WAM in her Modern Recording Techniques textbook and started taking classes at WAM that semester. Sam went on to intern at WAM, gaining hands-on experience assisting on sessions with high-profile artists like Kronos Quartet and Pamela Z. She also started mentoring in WAM’s youth program, Girls on the Mic, and found that teaching young girls audio skills boosted her self-confidence. Winston encouraged Sam to apply for a sixmonth internship at Pixar Animation Studios, which led to her current full-time position on the AV Systems team. “I would have never dreamed that I could work at a major movie studio if it weren’t for WAM. They are the reason I am at Pixar now. Their training, encouragement and belief in me made it all possible!” WAM provides low/no-cost training to youth

and adults through WAM’s Girls on the Mic program, which trains over 800 underserved San Francisco Bay Area middle school and high school-age girls a year and WAM Core Training, which serves over 350 young women a year. Kelley Coyne, a former intern at WAM’s studio and now head of the Girls on the Mic program, leads workshops for girls at local schools/ organizations and at WAM’s studio.

than 30 years. Veteran recording artist, engineer, music producer, and tenured City College of San Francisco professor, Terri Winston, has observed this problem during that time and decided to do something about it.

“It’s amazing to watch girls interact with music technology. At first, they’re really intimidated, but once you demystify technology for them and make it fun and inviting, they jump right in,” Coyne says. “One girl participated in Girls on the Mic last year and was so shy and needed a lot of encouragement to participate. She returned the following year full of confidence and mentored other students, showing them how to use Pro Tools.” Many Girls on the Mic students return to the program to mentor younger students and some even go on to become interns at WAM’s studio. WAM has placed over 225 women in jobs in the industry at companies like Dolby Laboratories, Pixar, KQED, NPR, Electronic Arts, SF Jazz, Tracy Chapman, and Comedy Central. “Being at WAM has helped me achieve my goal to become a sound engineer. The tools they provided for me and the techniques they showed me helped me grow into a well-rounded engineer,” former WAM intern, Alyssa Nevarez says, while sitting at her desk working for Richard Beggs, the Academy Award-winning sound designer for films such as Harry Potter and the Prisoner of Azkaban and Apocalypse Now, where WAM recently placed Nevarez. “Getting women into innovation and content creation positions is a powerful way to change the messages we receive about women and shift the representation of women in mainstream media,” Winston says. “We believe including women in music technology jobs and in the production process will expand the vision and voice of media and popular culture. It benefits us all.”

WAM ON THE WEB

The special Social Justice Issue features essays and first-hand narratives from musicians and music industry professionals on topics such as racism, sexism, LGBT rights and broadening equality in a changing industry landscape. 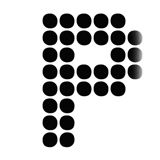