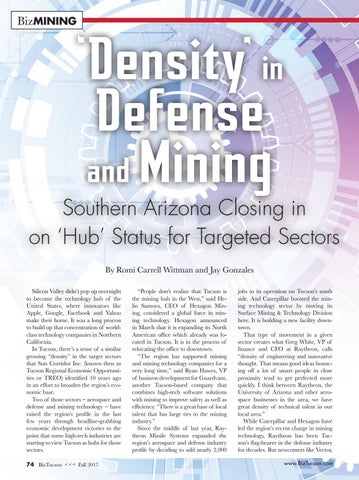 ‘Density’ in Defense and Mining

Southern Arizona Closing in on ‘Hub’ Status for Targeted Sectors By Romi Carrell Wittman and Jay Gonzales Silicon Valley didn’t pop up overnight to become the technology hub of the United States, where innovators like Apple, Google, Facebook and Yahoo make their home. It was a long process to build up that concentration of worldclass technology companies in Northern California. In Tucson, there’s a sense of a similar growing “density” in the target sectors that Sun Corridor Inc. (known then as Tucson Regional Economic Opportunities or TREO) identified 10 years ago in an effort to broaden the region’s economic base. Two of those sectors – aerospace and defense and mining technology – have raised the region’s profile in the last few years through headline-grabbing economic development victories to the point that some high-tech industries are starting to view Tucson as hubs for those sectors. 74 BizTucson

“People don’t realize that Tucson is the mining hub in the West,” said Helio Samora, CEO of Hexagon Mining, considered a global force in mining technology. Hexagon announced in March that it is expanding its North American office which already was located in Tucson. It is in the process of relocating the office to downtown. “The region has supported mining and mining technology companies for a very long time,” said Ryan Hawes, VP of business development for Guardvant, another Tucson-based company that combines high-tech software solutions with mining to improve safety as well as efficiency. “There is a great base of local talent that has large ties to the mining industry.” Since the middle of last year, Raytheon Missile Systems expanded the region’s aerospace and defense industry profile by deciding to add nearly 2,000

jobs to its operation on Tucson’s south side. And Caterpillar boosted the mining technology sector by moving its Surface Mining &amp; Technology Division here. It is building a new facility downtown. That type of movement in a given sector creates what Greg White, VP of finance and CFO at Raytheon, calls “density of engineering and innovative thought. That means good ideas bouncing off a lot of smart people in close proximity tend to get perfected more quickly. I think between Raytheon, the University of Arizona and other aerospace businesses in the area, we have great density of technical talent in our local area.” While Caterpillar and Hexagon have led the region’s recent charge in mining technology, Raytheon has been Tucson’s flag-bearer in the defense industry for decades. But newcomers like Vector, www.BizTucson.com