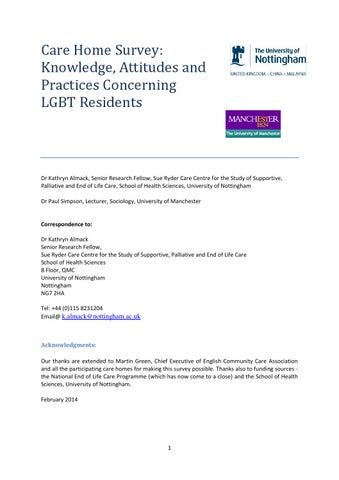 Acknowledgments: Our thanks are extended to Martin Green, Chief Executive of English Community Care Association and all the participating care homes for making this survey possible. Thanks also to funding sources the National End of Life Care Programme (which has now come to a close) and the School of Health Sciences, University of Nottingham. February 2014

Introduction In response to an online survey and following visits to seven care homes in the East Midlands and Northwest regions, one hundred and eighty nine (189) care home staff in England completed our questionnaire. The sample was mostly female (82%), middle-aged (between 41 and 60), white British (94%), Christian (48%), heterosexual (92%) and working as a care assistant (32%) or in a managerial role (34%). There is lots of individual goodwill towards old/er lesbian, gay, bisexual and trans (LGBT) residents but care homes could be doing more to address the issues in a more strategic way.

Just over four-fifths of respondents (82%) reported that they would not feel embarrassed talking about LGBT issues. Just over four-fifths (83%) of those responding did not consider same-sex relationships to be wrong. Nearly four-fifths (79%) agreed that residents should be enabled to express their sexual needs and nearly two-thirds 65% believed that residents were or could be ‘sexually active.’ Just over two-thirds of respondents (68%) disagreed that their religious beliefs negatively impacted upon their ability to accept LGBT people.

Nearly three quarters of those responding (73%) considered they had reasonable knowledge of LGBT issues. All respondents showed some awareness of legal and policy requirements and that discrimination should be avoided.

When asked about knowing of LGB&amp;T residents in their care homes: 

As regards monitoring and other practices, the responses identified areas for further work:  

Just over half (52%) of those responding indicated not feeling confident about educating others about issues concerning LGBT individuals. A quarter of respondents thought their care home monitored residents by sexual orientation and gender identity and 43% reported being ‘unsure’ about whether such monitoring was conducted. Forty three percent of those responding indicated that their home uses appropriate language on assessment forms but 40% were not sure and 18% said that this was not the case. 2

A third of respondents reported that internal policies made reference to LGBT individuals, the majority or nearly a half (48%) being ‘unsure’ and nearly one in five (19%) answered in the negative. Whilst 47% knew that their care home had a strategy for dealing with attempts at victimization of LGBT residents, 41% were ‘unsure’ of such a strategy and 12% indicated that their care home did not have such a strategy. A quarter of respondents thought their care home monitored residents by sexual orientation and gender identity and 43% reported being ‘unsure’ about whether such monitoring was conducted.

Nearly two in three respondents (64%) agreed that staff should receive training on the needs of LGBT people, though just over a fifth (22%) felt neutral about this. A quarter of those responding reported that their care home makes available training for staff that aims to sensitize them to LGBT relationships. But, nearly a third (32%) of respondents was ‘unsure’ and almost three in ten people (29%) answered in the negative. Nearly four-fifths (78%) of respondents indicated that they had never been provided with any LGBT-specific training in their current workplaces and only 13% reported ever having had such training. Forty four percent of respondents wanted more LGBT-specific training, though almost one in five (19%) were ‘unsure’ and 37% considered that they did not need this.

Take–home messages Whilst attitudes were generally positive, knowledge of LGBT individuals and issues was more variable if not erratic. Staff may not be so well supported in terms of training and could be struggling alone to meet needs. There was also a lack of strategic monitoring of the numbers of LGBT residents and work with residents concerning sexual/gender difference. The goodwill of staff needs converting into more strategic practice to make homes more LGBT inclusive. 3

Based on a non-random survey of 189 staff in residential homes for older people in England, this three-page document provides a summary of staff's attitudes, knowledge and practices in relation to lesbian, gay, bisexual and trans residents.