Excerpt from: LGBT Older Adults in Long-Term Care Facilities: Stories from the Field 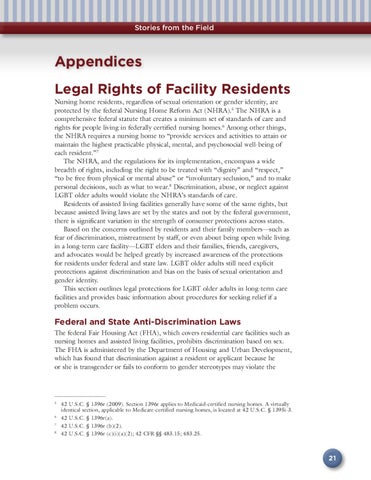 Appendices Legal Rights of Facility Residents Nursing home residents, regardless of sexual orientation or gender identity, are protected by the federal Nursing Home Reform Act (NHRA).5 The NHRA is a comprehensive federal statute that creates a minimum set of standards of care and rights for people living in federally certified nursing homes.6 Among other things, the NHRA requires a nursing home to “provide services and activities to attain or maintain the highest practicable physical, mental, and psychosocial well-being of each resident.”7 The NHRA, and the regulations for its implementation, encompass a wide breadth of rights, including the right to be treated with “dignity” and “respect,” “to be free from physical or mental abuse” or “involuntary seclusion,” and to make personal decisions, such as what to wear.8 Discrimination, abuse, or neglect against LGBT older adults would violate the NHRA’s standards of care. Residents of assisted living facilities generally have some of the same rights, but because assisted living laws are set by the states and not by the federal government, there is significant variation in the strength of consumer protections across states. Based on the concerns outlined by residents and their family members—such as fear of discrimination, mistreatment by staff, or even about being open while living in a long-term care facility—LGBT elders and their families, friends, caregivers, and advocates would be helped greatly by increased awareness of the protections for residents under federal and state law. LGBT older adults still need explicit protections against discrimination and bias on the basis of sexual orientation and gender identity. This section outlines legal protections for LGBT older adults in long-term care facilities and provides basic information about procedures for seeking relief if a problem occurs.

Federal and State Anti-Discrimination Laws The federal Fair Housing Act (FHA), which covers residential care facilities such as nursing homes and assisted living facilities, prohibits discrimination based on sex. The FHA is administered by the Department of Housing and Urban Development, which has found that discrimination against a resident or applicant because he or she is transgender or fails to conform to gender stereotypes may violate the

FHA.9 In addition, state and local laws in some jurisdictions expressly prohibit discrimination based on sexual orientation and gender identity in housing and/ or public accommodations. If you live in a state that lacks a nondiscrimination law, check to see if your city or county has passed an LGBT-inclusive ordinance. These can provide comparable protections.10

Nursing Home Residents The federal Nursing Home Reform Act (NHRA) applies to any nursing home that accepts reimbursement from Medicare or Medicaid (or both) and therefore covers more than 96 percent of the nursing homes in the country. In addition to the NHRA, federal law has established Long-Term Care Ombudsman Programs to provide assistance for consumers having problems with long-term care facilities. Also, individuals can bring a complaint to the state survey board or file a lawsuit. See below for more details. Helping residents reach the highest practicable level of functioning. The cornerstone of the NHRA is the requirement that a nursing home provide the care needed so that the resident can reach the highest practicable level of functioning. Care should never begin with the assumption that a nursing home resident is destined to do nothing more than decline and then die. Instead, the resident should receive necessary nursing care and therapy services, in an environment that respects the resident’s right to make choices about daily living. For LGBT residents, acceptance is a critical component of reaching the highest level of functioning, as many of the comments in this report point out. Individual assessment and comprehensive care plan. In a nursing home, care should be provided based upon a careful assessment of the resident’s health and capabilities, as translated into a comprehensive care plan. This care plan is developed by an interdisciplinary team that includes the resident and the resident’s representative, as well as nurses and other nursing home staff members. Ideally, the care plan will meld the staff’s health care expertise with the resident’s individual preferences. In development of the care plan and in the provision of care generally, the nursing home must reasonably accommodate a resident’s individual preferences. A care plan for an LGBT older adult should include protections against bias by staff or residents and accommodations for needs based on sexual orientation or gender identity. A transgender resident should be cared for by staff who are sensitive to gender identity. If double occupancies are the norm, that resident should be housed with someone who will treat him or her with dignity and respect. _________________ 9

Freedom from interference, coercion, discrimination, and reprisal for exercising rights. Under the NHRA’s regulations, a “resident has the right to be free of interference, coercion, discrimination, and reprisal from the facility in exercising his or her rights.”11 Federal guidelines for this right instruct government inspectors to “[p]ay close attention to resident or staff remarks and staff behavior that may represent deliberate actions to promote or to limit a resident’s autonomy or choice, particularly in ways that affect independent functioning.”12 Although there is no explicit mention of sexual orientation and gender identity in the NHRA and its regulations and guidelines, these provisions should be interpreted to cover negative treatment of LGBT older adults. Dignity and respect. The federal regulations implementing the NHRA state that a nursing home “must promote care for residents in a manner and in an environment that maintains or enhances each resident’s dignity and respect in full recognition of his or her individuality.”13 Biased treatment of LGBT older adults, including verbal and physical harassment by staff, thus is prohibited. Visitor access. Under the NHRA, a nursing home must “permit immediate access to a resident, subject to the resident’s right to deny or withdraw consent at any time, by immediate family or other relatives of the resident.”14 Thus, a resident’s family member can visit at any hour of the day or night, without regard to any visiting hours established by the nursing home. If a visitor is not a family member, however, the “immediate access” is “subject to reasonable restrictions and the resident’s right to deny or withdraw consent at any time.”15 These “reasonable restrictions” include reasonable visiting hours. Under these rules, an LGBT family member or friend cannot be excluded or limited to visiting hours that are different from those offered to other visitors. Despite recent advances in visitation rights, it is recommended that couples— whether in legally recognized relationships or not—complete a hospital visitation authorization. This document allows you to designate who you would like to be able to visit you in the hospital if you are no longer able to communicate this yourself. For more information about these forms, please contact any of the advocacy organizations listed in the Resource Section at the back of this report.

Limits on evictions. The NHRA sharply limits a facility’s ability to evict a resident. There are very limited justifications for eviction: nonpayment; the nursing home going out of business; or the resident needing a higher level of care, no longer needing nursing facility care, or endangering the health or safety of others. Thus, evictions on the basis of sexual orientation or gender identity are not authorized. There are explicit procedures in the law designed to protect a resident from arbitrary eviction. A nursing home must give written notice of eviction, generally at least 30 days before the proposed eviction date. A resident can appeal and have the issue determined by an administrative law judge. Advocacy mechanisms in the law. The resident may wish to obtain the assistance of the Long-Term Care Ombudsman Program in negotiating with the nursing home. There are nearly 600 ombudsman programs in 53 states and territories. To learn more about ombudsman programs, visit the website of the National Long-Term Care Ombudsman Resource Center, located with Consumer Voice at http://www.theconsumervoice.org/. If informal negotiations with the facility do not work, the resident can file a complaint with the state’s nursing home survey agency (often a licensing and certification division of the state’s health department), which has authority to fine or take other actions against nursing homes that violate the law.16 If the survey agency finds a violation, it should at a minimum require the nursing home to correct the situation. Finally, an individual has the right to sue a nursing home in court. In some circumstances, a resident may be well advised to file a lawsuit against an offending nursing home. See the Resource Section for information about how to reach legal advocates for LGBT people who may be able to assist.

Assisted Living Residents Assisted living standards are set by state licensure law, which varies significantly from state to state. Even so, some generalizations are possible. State assisted living standards generally include a resident’s right to self-determination and dignity. Also, a facility likely will have an obligation to assess a resident’s condition and to plan and provide care in accordance with that assessment. A state’s laws generally include some right to have visitors and to access the community outside the assisted living facility, although the extent of such rights varies from state to state. Generally, state assisted living laws limit a facility’s ability to evict residents. The allowed justifications for eviction, however, tend to be looser than the justifications for nursing home evictions, and state assisted living laws are generally somewhat vague as to a resident’s appeal rights. When an assisted living facility provides substandard care, a resident can take advocacy steps comparable to those recommended above for nursing home residents. The resident often will benefit from the assistance of a partner, family member, or friend. The first step is to speak to a responsible person at the facility, _________________ 16

Contact information for state survey agencies is available from the federal Centers for Medicare &amp; Medicaid Services at http://www.cms.gov/SurveyCertificationGenInfo/Downloads/Complaintcontacts.pdf

explaining the problem and (ideally) identifying the state assisted living regulation and/or anti-discrimination law that the facility is violating. If speaking with the facility representative does not bear fruit, a next step is to obtain the assistance of the state’s Long-Term Care Ombudsman Program, which, as explained above, is set up to help residents of long-term care facilities. Ombudsman Programs in most states, however, primarily deal with nursing home issues, and a significant number are not prepared to help assisted living residents. A resident can file a complaint with the state agency that inspects and licenses assisted living facilities. The agency likely will have authority to fine or otherwise punish an offending assisted living facility, although procedures will vary from state to state. At a minimum, if the state agency finds a legal violation, the agency will require the facility to correct the situation. As was mentioned in the discussion of advocacy for nursing home residents, a lawsuit may be advisable for problems that cannot be resolved otherwise. If a problem is related to discrimination in violation of the Fair Housing Act or state anti-discrimination law, the resident may obtain relief by making a complaint with HUD or with the relevant state anti-discrimination agency, respectively. More information about specific states’ assisted living laws is available on the website of the Assisted Living Consumer Alliance, http://www. assistedlivingconsumers.org. Another helpful resource is Critical Issues in Assisted Living, an examination of how state assisted living laws address important issues such as the type of residents admitted, conditions for eviction, and standards for staff members. See www.NSCLC.org for more information.

Excerpt from: LGBT Older Adults in Long-Term Care Facilities: Stories from the Field

This excerpt from "LGBT Older Adults in Long-Term Care Facilities: Stories from the Field" discusses legal rights and responsiblities of LGBT older adults.