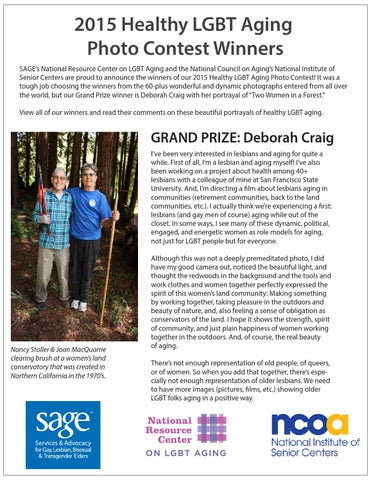 2015 Healthy LGBT Aging Photo Contest Winners SAGE’s National Resource Center on LGBT Aging and the National Council on Aging’s National Institute of Senior Centers are proud to announce the winners of our 2015 Healthy LGBT Aging Photo Contest! It was a tough job choosing the winners from the 60-plus wonderful and dynamic photographs entered from all over the world, but our Grand Prize winner is Deborah Craig with her portrayal of “Two Women in a Forest.” View all of our winners and read their comments on these beautiful portrayals of healthy LGBT aging.

GRAND PRIZE: Deborah Craig I’ve been very interested in lesbians and aging for quite a while. First of all, I’m a lesbian and aging myself! I’ve also been working on a project about health among 40+ lesbians with a colleague of mine at San Francisco State University. And, I’m directing a film about lesbians aging in communities (retirement communities, back to the land communities, etc.). I actually think we’re experiencing a first: lesbians (and gay men of course) aging while out of the closet. In some ways, I see many of these dynamic, political, engaged, and energetic women as role models for aging, not just for LGBT people but for everyone.

Nancy Stoller &amp; Joan MacQuarrie clearing brush at a women’s land conservatory that was created in Northern California in the 1970’s.

Although this was not a deeply premeditated photo, I did have my good camera out, noticed the beautiful light, and thought the redwoods in the background and the tools and work clothes and women together perfectly expressed the spirit of this women’s land community: Making something by working together, taking pleasure in the outdoors and beauty of nature, and, also feeling a sense of obligation as conservators of the land. I hope it shows the strength, spirit of community, and just plain happiness of women working together in the outdoors. And, of course, the real beauty of aging. There’s not enough representation of old people, of queers, or of women. So when you add that together, there’s especially not enough representation of older lesbians. We need to have more images (pictures, films, etc.) showing older LGBT folks aging in a positive way.

Kay Lahusen (75) and Barbara Gittings (73) Philadelphia, PA I have a deep respect for those who came before me and helped pave the way to where we are now. I don&#39;t ever want to take my rights, privilege and life for granted. This photograph honors two incredible women.

Marsha Bancroft (77), Vermont Senior Games State Triathlon Championship, Shelburne, Vermont A close friend saw an announcement of this photo contest and encouraged me to enter. This picture is a celebration for me, not only for winning but for being healthy and fit enough to compete at the age of 77. When this picture was taken, I was very excited to win my age group and be eligible for the National Senior Games! There is not enough representation of LGBT older people in the media and you can follow me on Twitter at @MJBancroft.

Barbara Gittings was one of the original pioneers of gay rights and organized the New York chapter of the Daughters of Bilitis and edited their national magazine, The Ladder. She worked closely with Frank Kameny in the 1960s on the first picket lines that brought attention to the ban on employment of gay people by the U.S. Government. Kay Lahusen was the first openly gay American woman photojournalist and contributed to The Ladder and helped with founding the original Gay Activists Alliance in 1970. This photo was shot in front of Philadelphia&#39;s Independence Hall in 2005, where they participated in one of the first gay protests ever on July 4th,1965. It shows how, despite and in spite of the struggles they endured, these two never backed down, grew old gracefully, together, and proud of who they were! It illustrates the success story of a love against all odds overcoming all hardships and prevailing. You can follow me on Twitter at @SpeakingOUT_rls or on Facebook at facebook.com/SpeakingOUT.rls.

This document highlights the winners of the 2015 Healthy LGBT Aging Photo Contest run by SAGE's National Resource Center on LGBT Aging and the National Council on Aging's National Institute of Senior Centers. The contest, held in early 2015, was focused on receiving photos of older LGBT adults living a healthy and active life.