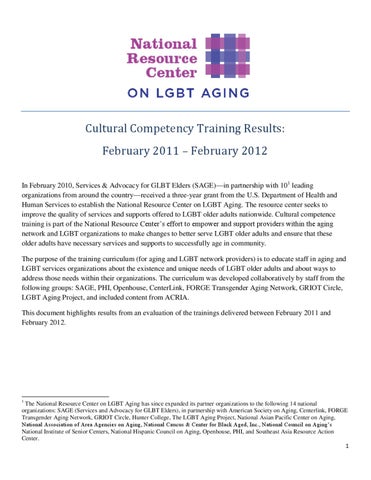 Cultural Competency Training Results: February 2011 – February 2012 In February 2010, Services &amp; Advocacy for GLBT Elders (SAGE)—in partnership with 101 leading organizations from around the country—received a three-year grant from the U.S. Department of Health and Human Services to establish the National Resource Center on LGBT Aging. The resource center seeks to improve the quality of services and supports offered to LGBT older adults nationwide. Cultural competence training is part of the National Resource Center’s effort to empower and support providers within the aging network and LGBT organizations to make changes to better serve LGBT older adults and ensure that these older adults have necessary services and supports to successfully age in community. The purpose of the training curriculum (for aging and LGBT network providers) is to educate staff in aging and LGBT services organizations about the existence and unique needs of LGBT older adults and about ways to address those needs within their organizations. The curriculum was developed collaboratively by staff from the following groups: SAGE, PHI, Openhouse, CenterLink, FORGE Transgender Aging Network, GRIOT Circle, LGBT Aging Project, and included content from ACRIA. This document highlights results from an evaluation of the trainings delivered between February 2011 and February 2012.

Cultural competency trainings are changing knowledge, attitudes and skills for serving LGBT Older Adults In the second year of implementing the National Resource Center on LGBT Aging, trainers from across the country delivered cultural competency trainings to six hundred people in the fields of older adult services (28 trainings) and LGBT services (6 trainings). Evaluation of the trainings, used pre-test and post-test measures to explore the knowledge, attitudes, and in more advanced trainings, skills of the participants. Knowledge There was a high level of knowledge demonstrated after attending the trainings. Knowledge measured both prior to the trainings and after the trainings significantly increased, while other indicators were measured only after trainings were delivered.  

Attitudes After attending the trainings, participants were highly aware of common barriers experienced by LGBT elders in need of services. Compared to their experiences before the trainings, respondents demonstrated…  

Skills Participants who attended the more extensive cultural competency trainings showed an increase in their ability to identify and address potential bias against LGBT elders in their work. 

More extensive components of the training helped nine out of ten participants address situations as they arise within their work settings.

Participants ranged in age from their mid-twenties through their mid-seventies, with a median age category of 45-50 years old. A large majority of all of the training participants had completed four-year college degrees or graduate degrees.

Trainings were attended by a racially-ethnically diverse group of participants.  

More than one-third of participants (36%) were persons of color while 64% identified as white or Caucasian. Participants of color identified themselves as African American or Black (11%), Latino or Hispanic (15%), Asian American, Pacific Islander, or Native Hawaiian(5%), American Indian (3%), or another race/ethnicity (Arab American or Middle Eastern, East Indian, or multi-racial).

Trainings are receiving high ratings from participants Nearly all participants reported that the trainings are offered in an environment where they feel safe asking questions, where respect for multiple viewpoints is demonstrated, and that they have learned things they will use in their work. Many expressed an interest in receiving follow-up communications related to LGBT aging cultural competence.

This document highlights results from an evaluation of NRC trainings delivered between February 2011 and February 2012.