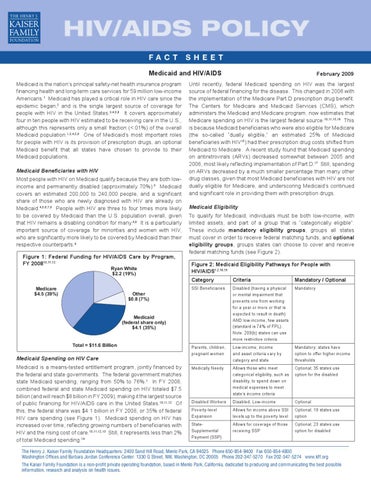 Medicaid and HIV/AIDS Medicaid is the nation’s principal safety-net health insurance program financing health and long-term care services for 59 million low-income Americans.1 Medicaid has played a critical role in HIV care since the epidemic began,2 and is the single largest source of coverage for people with HIV in the United States.3,4,5,6 It covers approximately four in ten people with HIV estimated to be receiving care in the U.S., although this represents only a small fraction (&lt;.01%) of the overall Medicaid population.1,3,4,5,6 One of Medicaid’s most important roles for people with HIV is its provision of prescription drugs, an optional Medicaid benefit that all states have chosen to provide to their Medicaid populations. Medicaid Beneficiaries with HIV Most people with HIV on Medicaid qualify because they are both lowincome and permanently disabled (approximately 70%).3 Medicaid covers an estimated 200,000 to 240,000 people, and a significant share of those who are newly diagnosed with HIV are already on Medicaid.4,5,6,7,8 People with HIV are three to four times more likely to be covered by Medicaid than the U.S. population overall, given that HIV remains a disabling condition for many.4,9 It is a particularly important source of coverage for minorities and women with HIV, who are significantly more likely to be covered by Medicaid than their respective counterparts.4 Figure 1: Federal Funding for HIV/AIDS Care by Program, FY 200810,11,12 Ryan White $2.2 (19%)

Until recently, federal Medicaid spending on HIV was the largest source of federal financing for the disease. This changed in 2006 with the implementation of the Medicare Part D prescription drug benefit. The Centers for Medicare and Medicaid Services (CMS), which administers the Medicaid and Medicare program, now estimates that Medicare spending on HIV is the largest federal source.10,11,15,16 This is because Medicaid beneficiaries who were also eligible for Medicare (the so-called “dually eligible,” an estimated 25% of Medicaid beneficiaries with HIV15) had their prescription drug costs shifted from Medicaid to Medicare. A recent study found that Medicaid spending on antiretrovirals (ARVs) decreased somewhat between 2005 and 2006, most likely reflecting implementation of Part D.17 Still, spending on ARVs decreased by a much smaller percentage than many other drug classes, given that most Medicaid beneficiaries with HIV are not dually eligible for Medicare, and underscoring Medicaid’s continued and significant role in providing them with prescription drugs. Medicaid Eligibility To qualify for Medicaid, individuals must be both low-income, with limited assets, and part of a group that is “categorically eligible”. These include mandatory eligibility groups, groups all states must cover in order to receive federal matching funds, and optional eligibility groups, groups states can choose to cover and receive federal matching funds (see Figure 2). Figure 2: Medicaid Eligibility Pathways for People with HIV/AIDS1,2,18,19 Category

Disabled (having a physical or mental impairment that prevents one from working for a year or more or that is expected to result in death) AND low-income, few assets (standard is 74% of FPL). Note: 209(b) states can use more restrictive criteria.

Low-income; income and asset criteria vary by category and state

Allows those who meet categorical eligibility, such as disability, to spend down on medical expenses to meet state’s income criteria

Optional; 35 states use option for the disabled

Allows for income above SSI levels up to the poverty level

Allows for coverage of those receiving SSP

Optional; 23 states use option for disabled

In the case of HIV, most who qualify for Medicaid are low-income and disabled, and receive Supplemental Security Income (SSI) benefits.2 The SSI income standard is 74% of the Federal Poverty Level (FPL) which, in FY 2008, was $7,696 or less for a family of one.20 Although there are several pathways to Medicaid, many people with HIV have trouble meeting eligibility requirements since childless adults who are low-income are categorically excluded from Medicaid under federal law unless they are disabled or pregnant; being HIV positive does not automatically qualify as a disability. Instead, Medicaid eligibility rules present a “Catch-22” for people with HIV relative to the current standard of care: they are not eligible for Medicaid until they are considered permanently disabled, even though there are medications available through Medicaid that prevent disability.2 To address this issue, three states have used “Section 1115” demonstration waivers to cover this population; two states have used demonstration grants through the Ticket to Work/Work Incentives Improvement Act of 1999; and federal legislation has been proposed to allow states the option to cover low-income people with HIV prior to disability under Medicaid.21

are likely to put greater demands on Medicaid at a time when state budgets are already stretched thin, raising concerns about access to care and coverage for low-income individuals including those with HIV.1 In addition, other programs that also provide HIV care, particularly the Ryan White Program, are similarly likely to face increased strains. Because of these challenges, there is a currently a larger national discussion underway about whether fiscal relief can be provided to the Medicaid program and what potential changes can be made to maintain or bolster access for low-income Americans. Given the importance of Medicaid for people with HIV, this population has much at stake in these discussions. Figure 3: Federal Spending on HIV Care Through Medicaid, Medicare, and Ryan White, FY 2006–2008 (in billions)10,11,12 $10.3 $0.7 $2.1

States have broad flexibility in determining their Medicaid benefits packages, including setting limits on the scope of services. For example, several states limit the number of prescriptions, hospital inpatient days, and physician visits allowed per month or year. States can also impose nominal cost-sharing for certain services.1 Benefits are offered on a fee-for-service basis, through managed care plans, or both; most states have enrolled some beneficiaries with HIV in Medicaid managed care.22 States can provide community-based, long-term care services to help individuals with disabilities remain independent and live in their communities. Options for doing so include the: “personal care option”; “rehabilitation services option”; and “home and community-based services (HCBS) waivers” (also called “1915(c) waivers”). HCBS waivers have been important for people with HIV and are used by several states to serve this population, although these services are not available to everyone who needs them and states often set limits on enrollment slots and scope of services. A study of HCBS waivers in place in 2005 found that 15 states had an HCBS designed specifically for or including people with HIV, which together served 14,258 individuals for a cost of $58.2 million. This translates into $4,081 per capita, less than for any other group served by HCBS waivers.23 Future Outlook and Challenges As the largest single source of care and coverage for people with HIV, Medicaid will continue to play a critical role for this population. Current economic conditions, however--a recession, rising unemployment, falling incomes, and loss of employer-sponsored health coverage--

Medicaid Benefits Medicaid covers a broad range of services. States must cover certain mandatory services to participate in Medicaid. Among the mandatory services important to people with HIV are: inpatient and outpatient hospital services; physician and laboratory services; and long term care.1 States may also cover certain optional services and receive federal matching funds. Prescription drugs, which all states have chosen to cover, are perhaps the most important optional benefit needed by people with HIV, given their critical role in AIDS care today and their growing expense. Others include: dental care; clinic services; home and community based and rehabilitation services; and case management. Many of these critical services are not covered by Medicare or private insurance.

This publication (#7172-04) is available on the Kaiser Family Foundation’s website at www.kff.org.