Out and Visible: The Experiences and Attitudes of LGBT Older Adults (Exec. Summary) 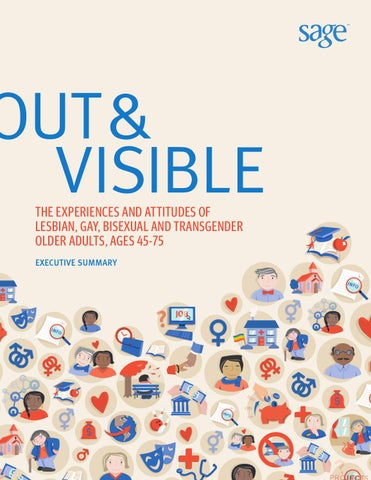 ACKNOWLEDGEMENTS SAGE would like to thank the Gill Foundation for its generous support of this research initiative and report. We are deeply grateful to David Krane, Marjie Sands and John Simmons at Harris Poll for leading this LGBT older adult market research study—and to Bob Witeck at Witeck Communications for his invaluable insights and guidance on emerging LGBT households and markets. Finally, we would like to express our gratitude to Rebecca Gillan (Senior Vice President) and John Hagerty (Senior Strategic Advisor) at the AARP Research Center for their indispensable advice throughout the life of this project.

ABOUT NIELSEN AND THE HARRIS POLL On February 3, 2014, Nielsen acquired Harris Interactive and The Harris Poll. Nielsen Holdings N.V. is a global information and measurement company with leading market positions in marketing and consumer information, television and other media measurement, online intelligence and mobile measurement. Nielsen has a presence in approximately 100 countries, with headquarters in New York, USA and Diemen, the Netherlands. For more information, visit nielsen.com.

Introduction Out and Visible: The Experiences and Attitudes of Lesbian, Gay, Bisexual and Transgender Older Adults, Ages 45-75 examines the values, needs, wants and lifestyle preferences of LGBT older people. This study explores the aging realities of LGBT people, as well as their fears, beliefs, behaviors and aspirations in areas such as healthcare, finance and retirement, support systems, housing and sources of information. SAGE also recognizes that this country has grown increasingly diverse in its racial and ethnic composition, and that women and transgender people (as two examples) often require unique supports. Thus, this study takes a closer look at the extent to which African Americans, Hispanics, women and transgender people have unique considerations within a diverse LGBT market. Out and Visible details a uniquely comprehensive, nationally representative quantitative study on aging among older LGBT people. This report aims to make LGBT people more visible as a population and as a market to the wide array of providers, businesses, community advocates, policy leaders and media professionals who are positioned to improve their overall quality of life. Together, we can reach a diverse population that has remained underserved for too long, while helping them attain a full life thatâ&amp;#x20AC;&amp;#x2122;s financially secure, free of discrimination, surrounded by community and replete with the types of leisure, activities and chosen careers that they deserve, regardless of age, sexual orientation or gender identity, among other characteristics.

METHODOLOGY The data used in this report came from an 18-minute online survey conducted by Harris Poll on behalf of SAGE (Services and Advocacy for GLBT Elders). A sample of 2,376 people ages 45-75 were surveyed online. The study was fielded between March 4, 2014 and March 21, 2014. Using figures from Harris Pollâ&amp;#x20AC;&amp;#x2122;s proprietary LGBT archive, data were weighted for education, age by gender, race and ethnicity, region and household income, where necessary, to align the respondent data with the U.S. population data on LGBT residents, ages 45-75 and non-LGBT residents, ages 45-75. Additionally, Harris Poll&#39;s weighting algorithm allowed for adjustments that accounted for attitudinal and behavioral differences between those who are online from those who are not;

those who join online research panels from those who do not; and those who responded to this survey and those who did not. Finally, LGBT African American and Hispanic respondents were oversampled to ensure a sufficient number of completed interviews for analysis. For more information on the methodology, please read the full report at sageusa.org.

51% OF LGBT OLDER PEOPLE ARE CONCERNED ABOUT HAVING ENOUGH MONEY TO LIVE ON AS THEY AGE, AS COMPARED TO 36% OF NON-LGBT PEOPLE.

67% OF LGBT OLDER PEOPLE WITH ANNUAL INCOMES LESS THAN $50,000 ARE CONCERNED ABOUT CUTS IN SOCIAL SECURITY, MEDICARE OR MEDICAID.

When planning for retirement, both LGBT and non-LGBT older people rely largely on their own knowledge and education.

Many LGBT older people are concerned that volunteering and working during their retirement years will be hindered if others know about their sexual orientations and gender identities.

Yet LGBT older people are less likely than non-LGBT older people to say that their age will be a barrier to these activities. One in four (27%) LGBT older adults feels that work or volunteer activities will not be open to him/her if others know about his/her sexual orientation, and one in three (33%) transgender adults feels those same activities will not be accessible if others know about his/her gender identity.

1 IN 4 LGBT OLDER PEOPLE AND 1 IN 3 TRANSGENDER OLDER PEOPLE FEAR THAT VOLUNTEER ACTIVITIES WILL NOT BE OPEN TO THEM IN OLDER AGE IF THEIR SEXUAL ORIENTATIONS OR GENDER IDENTITIES BECOME KNOWN.

LGBT older people are more likely than their non-LGBT peers to live alone, have smaller support networks over time and are less satisfied with the information they receive related to support systems.

1 IN 4 (25%) TRANSGENDER ADULTS SAY THAT THEY HAVE BEEN DISCRIMINATED AGAINST WHEN SEARCHING FOR HOUSING.

gender identities, respectively. Forty-four percent of LGBT older adults are very or extremely interested in living in an affordable LGBT-friendly housing development at some point in the future. When seeking information on aging, both LGBT and non-LGBT people are likely to rely on the internet, as well as family and friends, as their top sources. Among LGBT older people, women are more likely than men to rely on government sources, and men are more likely than women to rely on social media.

Conclusions and Recommendations The results of this study attest to the importance of creating welcoming environments that support LGBT older people in various aspects of their lives. Concerns about aging are high among LGBT older people (especially among Hispanics, African Americans, women, transgender people and single people, as notable examples), and they need to feel welcome as LGBT people in the aging and longterm care systems, and as older adults in LGBT communities. Many LGBT older people report not disclosing their identities to their healthcare providers for fear of being judged; this information can be systematized into the patient intake process and paired with proper training, policies and protocols to ensure that LGBT patients are identified and treated properly by healthcare providers. Likewise, financial professionals, nonprofit organizations and government agencies are positioned to improve their offerings to LGBT older people so that they prepare properly for their retirement and feel more secure about their financial futures. Because many LGBT older people anticipate working well beyond retirement age, they need proper legal protections in the workplace and

access to employment programs that speak to them as LGBT older people dealing with age- and LGBTrelated biases in employment. Many LGBT older people report living alone, being single and seeing their support networks become smaller over time; LGBT aging programs can fill this gap, but these types of supports need more funding support and widespread expansion. Mainstream aging providers can also benefit from LGBT cultural competence training, and aging programs rooted in definitions of “family” and “next of kin” should be expanded to include friends, caregivers and others who are central to LGBT people. As the economy worsens and housing insecurity increases, LGBT older people face additional challenges when they encounter discrimination in housing and longterm care settings. Stronger legal protections are needed in these areas at federal, state and local levels. Additionally, LGBT older people could benefit from LGBT senior housing, along with an array of complementary housing supports and policy improvements. Finally, without accurate information that reaches LGBT older people through proper channels, LGBT older people might lack the information they need to

make wise choices earlier in their aging lives. Further research should help the public and private sectors grasp how LGBT older people can access better information on all aspects of their lives. In the meantime, the current information emanating from the public and private sector should be increased, made more readily available, and vetted for accuracy, accessibility and LGBT-inclusivity.

Visit sageusa.org for more information on this national study, including the full report and executive summary, the survey questionnaire and frequently asked questions (FAQ). Also, if you’re interested in partnering with SAGE to understand key areas of this report in more depth, or to explore how SAGE can support your organizational and business strategies related to LGBT older people, please contact us at 212-741-2247 or email us at outandvisible@sageusa.org.

SAGE (Services and Advocacy for GLBT Elders) is the countryâ&amp;#x20AC;&amp;#x2122;s largest and oldest organization dedicated to improving the lives of lesbian, gay, bisexual and transgender (LGBT) older adults. Founded in 1978 and headquartered in New York City, SAGE is a national organization that offers supportive services and consumer resources to LGBT older adults and their caregivers, advocates for public policy changes that address the needs of LGBT older people, and provides training for aging providers and LGBT organizations through its National Resource Center on LGBT Aging. With offices in New York City, Washington, DC and Chicago, SAGE coordinates a growing network of 27 local SAGE affiliates in 20 states and the District of Columbia. For more information, visit sageusa.org.

Out and Visible: The Experiences and Attitudes of LGBT Older Adults (Exec. Summary)