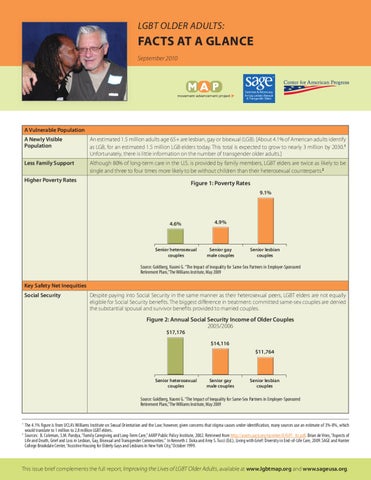 Facts at a Glance September 2010

An estimated 1.5 million adults age 65+ are lesbian, gay or bisexual (LGB). [About 4.1% of American adults identify as LGB, for an estimated 1.5 million LGB elders today. This total is expected to grow to nearly 3 million by 2030.1 Unfortunately, there is little information on the number of transgender older adults.]

Although 80% of long-term care in the U.S. is provided by family members, LGBT elders are twice as likely to be single and three to four times more likely to be without children than their heterosexual counterparts.2

Despite paying into Social Security in the same manner as their heterosexual peers, LGBT elders are not equally eligible for Social Security benefits. The biggest difference in treatment: committed same-sex couples are denied the substantial spousal and survivor benefits provided to married couples.

The 4.1% figure is from UCLA’s Williams Institute on Sexual Orientation and the Law; however, given concerns that stigma causes under-identification, many sources use an estimate of 3%-8%, which would translate to 1 million to 2.8 million LGBT elders. Sources: B. Coleman, S.M. Pandya, “Family Caregiving and Long-Term Care,” AARP Public Policy Institute, 2002. Retrieved from http://assets.aarp.org/rgcenter/il/fs91_ltc.pdf. Brian de Vries, “Aspects of Life and Death, Grief and Loss in Lesbian, Gay, Bisexual and Transgender Communities.” In Kenneth J. Doka and Amy S. Tucci (Ed.), Living with Grief: Diversity in End-of-Life Care, 2009. SAGE and Hunter College Brookdale Center, “Assistive Housing for Elderly Gays and Lesbians in New York City,” October 1999.

For married heterosexual couples, Medicaid has exemptions to avoid forcing a healthy spouse to live in poverty in order to qualify a spouse for long-term care. Unfortunately, these spousal impoverishment protections do not apply to same-sex couples and other financially interdependent older adults.

Despite recent positive changes in the law, LGBT elders still lack the same benefits as their heterosexual peers when it comes to the treatment of IRAs and similar plans.

Federal tax law currently allows an employer to provide health insurance to the heterosexual spouse of an employee or retired employee as a tax-free benefit. However, for same-sex couples, a partner’s insurance benefits are treated as taxable income.

The federal government allows a surviving heterosexual spouse to inherit all of the couple’s assets without incurring any tax penalty. By contrast, federal and state laws require same-sex partners to pay inheritance taxes on some estates.

The U.S. Department of Veterans Affairs provides a variety of benefits to veterans’ heterosexual spouses, including pensions paid to the spouse of a service member killed in combat, medical care and home loan guarantees. These benefits are not available to a same-sex partner.

In most cases, LGBT elders must put in place a series of specific and often expensive legal arrangements to try to ensure that financial decision making and inheritance will pass to a partner or other loved one.

LGBT people report lower rates of health insurance coverage. Because many LGBT elders fear discrimination by doctors and facilities that provide preventive and non-emergency care, they are more likely to delay getting the necessary care and prescriptions. Figure 3: LGB adults are more likely to delay or not seek medical care. Percentage of adults delaying or not seeking health care Heterosexual LGB Transgender

Many professional caregivers are not accepting of LGBT elders and not trained to deal properly with their unique needs. These providers might be hostile, discriminatory or simply unaware that LGBT elders exist. For example, 8.3% of LGBT elders reported being neglected or abused by a caretaker due to their sexual orientation or gender identity.

Neglected By A Caretaker Because Of Sexual Orientation Or Gender Identity

Nursing home rules, combined with prejudice and hostile treatment from staff and fellow patients, can create unwelcoming environments for LGBT elders who are unable to advocate for themselves.

New HIV diagnoses among those aged 50 to 59 increased 32% from 2004 to 2007. The proportion of people living with HIV/AIDS who are older than 50 is now more than double that of people under age 24, due in part to life-prolonging drug treatments. Yet there are almost no HIV prevention programs targeted at older adults, and doctors do not generally talk to their older patients about HIV/AIDS risks or even sex in general.

LGBT people have high rates of stress related in large part to systematic discrimination. Numerous studies have shown that the LGBT population as a whole has higher rates of smoking, alcohol use, drug use, suicide and depression.

Studies suggest higher levels of chronic and other health problems among LGBT adults, including asthma, diabetes, HIV/AIDS, obesity, rheumatoid arthritis and certain illnesses such as cancer. LGBT elders, thus, have aged into their later years with these additional health concerns.

Figure 6: LGB adults are more likely to have cancer. Percentage of adults ever diagnosed with cancer Heterosexual LGB

Without complex and often expensive legal arrangements in place, the partners and loved ones of LGBT elders might be denied visitation or shut out of medical or end-of-life decision making.

The federal Family and Medical Leave Act, and most similar state acts, do not have provisions that allow LGBT elders to take time off to take care of a sick partner.

Despite their need for strong social networks, LGBT elders often feel unwelcome at senior centers, volunteer centers and places of worship. Few of these agencies engage in outreach to LGBT elders, nor are they often prepared to address incidents of discrimination toward LGBT elders by other clients and older people.

Figure 7 Area Agencies on Aging: “LGBT people would not be welcome at our senior centers”

LGBT elders might be denied housing, including residency in retirement communities, based on their sexual orientations and gender identities and expressions. This discrimination could separate LGBT elders from loved friends or partners, or push them into homelessness. LGBT elders might also feel the need to re-enter or stay “in the closet” in order to obtain or maintain housing.

In addition to the everyday challenges of aging, LGBT older people face an array of unique barriers and inequalities that can stand in the way of a healthy and rewarding later life. The additional challenges to successful aging faced by LGBT elders are gaining visibility with the aging of LGBT Baby Boomers, who are the first generation of LGBT people to have lived openly gay or transgender lives in large numbers. This brief provides a quick overview of these challenges.