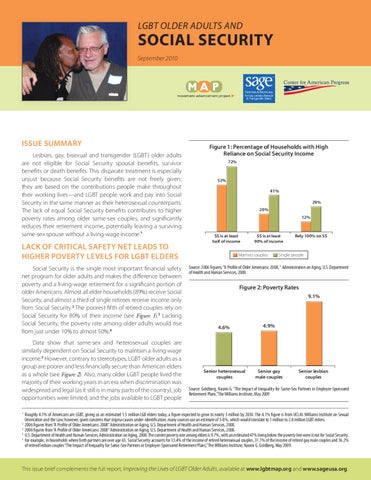 ISSUE SUMMARY Lesbian, gay, bisexual and transgender (LGBT) older adults are not eligible for Social Security spousal benefits, survivor benefits or death benefits. This disparate treatment is especially unjust because Social Security benefits are not freely given; they are based on the contributions people make throughout their working lives—and LGBT people work and pay into Social Security in the same manner as their heterosexual counterparts. The lack of equal Social Security benefits contributes to higher poverty rates among older same-sex couples, and significantly reduces their retirement income, potentially leaving a surviving same-sex spouse without a living-wage income.1

LACK OF CRITICAL SAFETY NET LEADS TO HIGHER POVERTY LEVELS FOR LGBT ELDERS Social Security is the single most important financial safety net program for older adults and makes the difference between poverty and a living-wage retirement for a significant portion of older Americans. Almost all elder households (89%) receive Social Security, and almost a third of single retirees receive income only from Social Security.2 The poorest fifth of retired couples rely on Social Security for 80% of their income (see Figure 1).3 Lacking Social Security, the poverty rate among older adults would rise from just under 10% to almost 50%.4 Data show that same-sex and heterosexual couples are similarly dependent on Social Security to maintain a living-wage income.5 However, contrary to stereotypes, LGBT older adults as a group are poorer and less financially secure than American elders as a whole (see Figure 2). Also, many older LGBT people lived the majority of their working years in an era when discrimination was widespread and legal (as it still is in many parts of the country), job opportunities were limited, and the jobs available to LGBT people

SS is at least half of income

DENIAL OF “SPOUSAL BENEFIT” The “spousal benefit” allows any person who once was, or is, married for at least ten years to receive the greater of the Social Security benefit that he or she has earned over a lifetime, or 50% of the benefit that his or her past or current spouse has earned (the theory is that one spouse was caring for children and may have lower or no earnings). For example, a wife who has never worked may nonetheless claim $500 monthly in Social Security if her husband receives $1,000 monthly. Because the federal government does not recognize the relationships of samesex couples, they are ineligible for spousal benefits. The lack of spousal benefits can cost an LGBT elder up to $14,076 a year in lost benefits (assuming one partner earns the maximum monthly Social Security payout and the other does not qualify for Social Security due to lack of legal recognition).6

was $5,528.8 Given that the median income for households of single individuals over age 65 (including widows and widowers) is $15,928,9 this discrepancy in Social Security payments can literally mean the difference between an income one can survive on or living in poverty. The lack of survivor benefits can cost an LGBT elder up to $28,152 per year in lost benefits (assuming one partner earned the maximum monthly Social Security payout and the other does not qualify for Social Security due to lack of legal recognition).10

DENIAL OF “DEATH BENEFIT” Social Security pays a one-time “death benefit” of $255 when a spouse dies, which often helps cover funeral and burial or cremation expenses.

CONSEQUENCES OF UNEQUAL TREATMENT Among the Social Security benefits denied to LGBT elders, the lack of survivor benefits is the most harmful. Not only has the surviving spouse just been widowed, but the legal invisibility of the partner’s relationship to the deceased could now leave him or her in financial crisis. Data show the grim effects of this unequal treatment: lesbian couples receive an average of 31.5% less in Social Security and gay couples receive 17.8% less, when compared to heterosexual couples (see Figure 3).11 Over time, the effects of this unequal treatment compound, as shown in Figure 4, potentially leaving a same-sex couple in poverty, while providing far more adequate financial security for a heterosexual couple with an identical initial financial situation. Figure 3: Annual Social Security Income of Older Couples 2005/2006 $17,176 $14,116 $11,764

DENIAL OF “SURVIVOR BENEFIT” The Social Security “survivor benefit” allows a surviving heterosexual spouse or ex-spouse to receive the greater of his or her individual benefit or 100% of the spouse’s benefit amount. For example, the otherwise ineligible homemaker in the previous example receives $1,000 monthly upon her husband’s death, whereas a lesbian widow without work history receives nothing.7 In 2004, the Human Rights Campaign (HRC) estimated that the average annual impact of the lack of a survivor benefit on a gay man or lesbian who earned less than his or her deceased partner

$264, not eligible for spousal benefit

Impact Over 15 Years (Assumes Each Couple Spends $15,000/ Yr of their Social Security Income)2

George and Christine Die — Social Security for Maria and June

Financial Outcome for Maria and June (Ongoing Cost of Living Drops to $12,000)

• Maria can continue to live in her home indefinitely

• Within 2 years, June has no savings and can’t afford groceries and property taxes

• She is forced to sell her home and, once the equity is depleted, apply for food stamps

1. The average Social Security payout for a retired worker. 2. Assumes each couple owns their home and has very modest expenses; however a similar scenario would arise where couples spend more but rely on other sources of income for those additional expenses (e.g., each couple spends $30,000 per year and relies on $15,000 of earned income).

The inequities in Social Security benefits can also create significant hardship for single LGBT elders. Overall, single older adults are highly reliant on Social Security, with 41% of these adults relying on Social Security for 90% of their income.12 While LGBT elders are much more likely than their heterosexual peers to live alone, many were once in long-term committed relationships— and many are, in fact, widows or widowers. Any heterosexual elder who has been married for a minimum of 10 years and is not currently remarried is eligible for spousal and survivor benefits. However, LGBT elders are not eligible for benefits based on past same-sex relationships.

Third, policymakers should pass the federal Employment NonDiscrimination Act (ENDA) including protections based on gender identity and expression. This act is critical to secure the financial health of LGBT elders as lifetimes of employment discrimination result in lower earnings and lower Social Security benefits.

2006 figures from “A Profile of Older Americans: 2008,” Administration on Aging, U.S. Department of Health and Human Services, 2008. Note that on July 8, 2010, the U.S. District Court of Massachusetts ruled DOMA unconstitutional in its lack of recognition of same-sex couples for the purposes of Social Security benefits, federal employee benefits and tax returns (Gill v. The Office of Personnel Management). This decision is expected to be appealed. 14 This could be done both by creating a unique definition of domestic partner for this act for which any same-sex couple would qualify and/or by recognizing formalized unions in other states (domestic partnerships, civil unions, marriages) as domestic partners for the purposes of Social Security. 12 13

80-Year-Old Man Struggles to Make Ends Meet after Being Denied Survivor Benefits Herbert Burtis and John Ferris met in college, in 1948. Herb was 18, John was 22. They legally married in Massachusetts in 2004, after what they called their “55-year engagement.” When John died in August 2008, they had been together for 60 years.

Now 80, Herb is learning how to live a life without John. He says it’s the hardest thing he’s ever had to do—harder than living apart from John for 21 years when they had jobs in different states; harder than watching John’s health deteriorate from Parkinson’s disease for 16 years; harder, even, than caring for him in their Sandisfield home during the final years of John’s life. But the federal government has pulled away the Social Security safety net John paid into all the years he was working, and that Herb still pays into through his adjunct work as a voice teacher at Smith College. “Just as I struggled to cope with John’s loss, I never thought I would have to fight the federal government for the legal and financial protections that I need, and that other surviving spouses can count on,” says Herb. Herb loses $700 monthly in Social Security income because he is not eligible for survivor benefits. Herb says the extra income “… would cover my gap health insurance—what I get above and beyond Medicare. My medications alone are $700 each month. It would make a big difference.”

Bette Jo and Jo Ann became friends as college students in 1960. They parted ways after graduation, but nearly 20 years later they both found themselves living in Massachusetts. They reconnected, and fell in love.

They have been committed to each other for nearly 30 years, building a life together in the Boston neighborhood of Jamaica Plain where they are well-known as the “hot dog ladies” for their role in weekly community barbecues during the summer. Bette Jo, 68, retired last year after a 35-year career as a labor and delivery nurse. Jo Ann, 68, still works part time as a garden educator. They legally married in their backyard garden—their pride and joy—in 2004, with friends and neighbors. They have found joy in the good times and have loved and supported each other through the hard times—through losing parents, losing friends, and both their battles with cancer. They worry about their financial future. But unlike other married people their age, their worries are multiplied by federal discrimination. They lose money each year because they are denied the spousal Social Security benefit that would increase Jo Ann’s monthly Social Security payment. Jo Ann will also be denied the Social Security survivor benefit. Says Jo Ann, “I will not only lose the love of my life, I will lose more than $12,864 each year—a major part of my retirement income.” “We have both worked hard at our jobs—jobs we have loved, but they never were going to make us wealthy,” says Bette Jo. “We have paid into Social Security all our lives, but now we are not fully protected by the system the way other married couples are.” 15

Herb, Bette Jo and Jo Ann are all plaintiffs in the recent lawsuit, Gill v. Office of Personnel Management, filed by Gay &amp; Lesbian Advocates &amp; Defenders. In July of 2010, the Massachusetts District Court ruled that the Defense of Marriage Act’s denial of Social Security benefits to same-sex spouses is unconstitutional. This decision is being appealed and only pertains to same-sex couples who can legally marry in their state. For more information, see www.glad.org/doma/lawsuit

LGBT older adults are not eligible for Social Security spousal benefits, survivor benefits, or death benefits. This disparate treatment is especially unjust because Social Security benefits are not freely given; they are based on the contributions people make throughout their working lives—and LGBT people work and pay into Social Security in the same manner as their heterosexual counterparts. The lack of equal Social Security benefits contributes to higher poverty rates among older same-sex couples and significantly reduces their retirement income, potentially leaving a surviving same-sex spouse without a living-wage income. One of eleven issue briefs based on the SAGE/MAP report Improving the Lives of LGBT Older Adults.