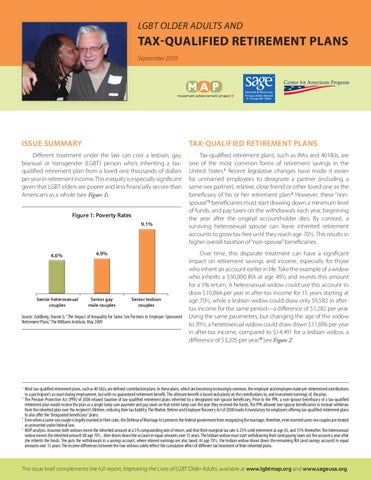 Different treatment under the law can cost a lesbian, gay, bisexual or transgender (LGBT) person who’s inheriting a taxqualified retirement plan from a loved one thousands of dollars per year in retirement income. This inequity is especially significant given that LGBT elders are poorer and less financially secure than Americans as a whole (see Figure 1).

Tax-qualified retirement plans, such as IRAs and 401(k)s, are one of the most common forms of retirement savings in the United States.1 Recent legislative changes have made it easier for unmarried employees to designate a partner (including a same-sex partner), relative, close friend or other loved one as the beneficiary of his or her retirement plan.2 However, these “nonspouse”3 beneficiaries must start drawing down a minimum level of funds, and pay taxes on the withdrawals each year, beginning the year after the original accountholder dies. By contrast, a surviving heterosexual spouse can leave inherited retirement accounts to grow tax-free until they reach age 70½. This results in higher overall taxation of “non-spouse” beneficiaries.

Over time, this disparate treatment can have a significant impact on retirement savings and income, especially for those who inherit an account earlier in life. Take the example of a widow who inherits a $50,000 IRA at age 49½ and invests this amount for a 5% return. A heterosexual widow could use this account to draw $10,864 per year in after-tax income for 15 years starting at age 70½, while a lesbian widow could draw only $9,582 in aftertax income for the same period—a difference of $1,282 per year. Using the same parameters, but changing the age of the widow to 39½, a heterosexual widow could draw down $17,696 per year in after-tax income, compared to $14,491 for a lesbian widow, a difference of $3,205 per year.4 See Figure 2.

Most tax-qualified retirement plans, such as 401(k)s, are defined-contribution plans. In these plans, which are becoming increasingly common, the employer and employee make pre-determined contributions to a participant’s account during employment, but with no guaranteed retirement benefit. The ultimate benefit is based exclusively on the contributions to, and investment earnings of, the plan. The Pension Protection Act (PPA) of 2006 relaxed taxation of tax-qualified retirement plans inherited by a designated non-spouse beneficiary. Prior to the PPA, a non-spouse beneficiary of a tax-qualified retirement plan would receive the plan as a single lump sum payment and pay taxes on that entire lump sum the year they received the funds. The PPA allowed non-spouse beneficiaries to instead withdraw from the inherited plan over the recipient’s lifetime, reducing their tax liability. The Worker, Retiree and Employer Recovery Act of 2008 made it mandatory for employers offering tax-qualified retirement plans to also offer the “designated beneficiary” plans. 3 Even when a same-sex couple is legally married in their state, the Defense of Marriage Act prevents the federal government from recognizing the marriage; therefore, even married same-sex couples are treated as unmarried under federal law. 4 MAP analysis. Assumes both widows invest the inherited amount at a 5% compounding rate of return, and that their marginal tax rate is 25% until retirement at age 65, and 15% thereafter. The heterosexual widow invests the inherited amount till age 70½ , then draws down the account in equal amounts over 15 years. The lesbian widow must start withdrawing from (and paying taxes on) the account a year after she inherits the funds. She puts the withdrawals in a savings account, where interest earnings are also taxed. At age 70½, the lesbian widow draws down the remaining IRA (and savings account) in equal amounts over 15 years. The income differences between the two widows solely reflect the cumulative effect of different tax treatment of their inherited plans. 1 2

Most same-sex couples cannot marry, but even where legal at the state level, the federal government does not recognize such marriages under the Defense of Marriage Act (DOMA). This results in same-sex spouses being treated as “non-spouse” beneficiaries under federal tax law, even when legally married in their state.5 To provide older same-sex couples with access to retirement plan benefits and other critical safety net programs, Congress must repeal DOMA and states must establish marriage for all couples. However, there is no inherent reason to treat non-spouse beneficiaries differently from a surviving spouse. Policymakers should amend the Employee Retirement Income Security Act (ERISA) to allow “non-spouse” beneficiaries to draw down inherited IRAs on the same schedule as spousal beneficiaries. This amendment would provide immediate relief for all samesex couples (including those living in states where they cannot legally marry), and it would help a broad range of “non-spouse” beneficiaries, such as two siblings or close friends who are living together and are financially interdependent.

Note that on July 8, 2010, the U.S. District Court of Massachusetts ruled DOMA unconstitutional in its lack of recognition of same-sex couples for the purposes of Social Security benefits, federal employee benefits and tax returns (Gill v. The Office of Personnel Management). At time of writing, it is unclear how this decision will affect other aspects of DOMA. This decision is also being appealed.

Inheriting a tax-qualified retirement plan from a loved one can cost an LGBT person thousands of dollars per year in retirement income because of different treatment under the law. This inequity is especially significant given that LGBT elders are poorer and less financially secure than Americans as a whole. One of eleven issue briefs based on the SAGE/MAP report Improving the Lives of LGBT Older Adults.