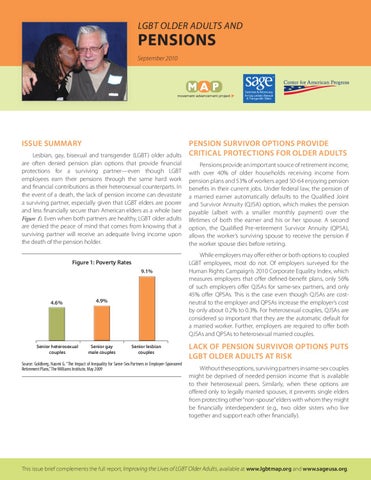 ISSUE SUMMARY Lesbian, gay, bisexual and transgender (LGBT) older adults are often denied pension plan options that provide financial protections for a surviving partner—even though LGBT employees earn their pensions through the same hard work and financial contributions as their heterosexual counterparts. In the event of a death, the lack of pension income can devastate a surviving partner, especially given that LGBT elders are poorer and less financially secure than American elders as a whole (see Figure 1). Even when both partners are healthy, LGBT older adults are denied the peace of mind that comes from knowing that a surviving partner will receive an adequate living income upon the death of the pension holder. Figure 1: Poverty Rates 9.1%

PENSION SURVIVOR OPTIONS PROVIDE CRITICAL PROTECTIONS FOR OLDER ADULTS Pensions provide an important source of retirement income, with over 40% of older households receiving income from pension plans and 53% of workers aged 50-64 enjoying pension benefits in their current jobs. Under federal law, the pension of a married earner automatically defaults to the Qualified Joint and Survivor Annuity (QJSA) option, which makes the pension payable (albeit with a smaller monthly payment) over the lifetimes of both the earner and his or her spouse. A second option, the Qualified Pre-retirement Survivor Annuity (QPSA), allows the worker’s surviving spouse to receive the pension if the worker spouse dies before retiring. While employers may offer either or both options to coupled LGBT employees, most do not. Of employers surveyed for the Human Rights Campaign’s 2010 Corporate Equality Index, which measures employers that offer defined-benefit plans, only 56% of such employers offer QJSAs for same-sex partners, and only 45% offer QPSAs. This is the case even though QJSAs are costneutral to the employer and QPSAs increase the employer’s cost by only about 0.2% to 0.3%. For heterosexual couples, QJSAs are considered so important that they are the automatic default for a married worker. Further, employers are required to offer both QJSAs and QPSAs to heterosexual married couples.

LACK OF PENSION SURVIVOR OPTIONS PUTS LGBT OLDER ADULTS AT RISK Without these options, surviving partners in same-sex couples might be deprived of needed pension income that is available to their heterosexual peers. Similarly, when these options are offered only to legally married spouses, it prevents single elders from protecting other “non-spouse” elders with whom they might be financially interdependent (e.g., two older sisters who live together and support each other financially).

On Christmas Day 2009, Missouri State Highway Patrol Corporal Dennis Engelhard, 49, was killed by a car that lost control in the snow as Engelhard was placing flares near the scene of a minor accident. Official information released by the Highway Patrol described Engelhard as single. However, Engelhard, openly gay, left behind a partner of 15 years, Kelly Glossip, who was not mentioned in the obituary or recognized at the funeral.

Glossip said his relationship with Engelhard was no secret— they lived together in a modest home they owned together, and Glossip was listed as Engelhard’s emergency contact. They also showed up together at a Fourth of July party attended by other troopers. Glossip, on medical leave from his job in patient billing due to back problems, relied on Engelhard to help pay the mortgage and other bills, and to support a teenage son from a previous marriage. He now wonders how he will make ends meet. If Engelhard had been married, his spouse would be entitled to lifetime survivor’s benefits from the state pension system— more than $28,000 a year. But neither the state Highway Patrol pension system nor Missouri law recognizes domestic partners.

Kelly Glossip poses for a photo as he holds a picture of himself and longtime domestic partner Dennis Englehard, Friday, Jan. 29, 2010, in Robertsville, Mo. Glossip said he was both grieving a death and struggling financially after Englehard was killed in the line of duty, leaving Glossip with no right to his partner’s pension.

“The partner, plain and simple, is out of luck,” said state Rep. Mike Colona. “I’m outraged that that’s the situation, but it’s the status of the law.” BackStoppers, which provides assistance to the families of local officers killed in the line of duty, gave $5,000 to Engelhard’s parents after he was killed. “The parents are the legal next of kin,” said BackStoppers director Ronald A. Battelle. The MASTERS, a fraternal organization for Missouri state troopers, also typically helps family of patrol members who die in the line of duty— including up to $50,000 in mortgage payments. However, at the time of this writing, the organization is still deliberating whether to provide assistance to Glossip. “We have never paid benefits to a girlfriend or boyfriend,” said Fred Mills, one of the group’s directors. “It’s always been spouse and/or children.” Glossip still lives in the house he shared with Engelhard, and is dismayed at the fact that he has been unfairly treated. “It just hurts so bad. I am his spouse — we loved each other,” he said. “I wouldn’t want anyone else to have to go through this.” Source: www.stlouistoday.com, “Trooper’s Partner May Not Get Benefits,” January 30, 2010; and Associated Press (MO), “Late Highway Patrol Trooper’s Partner Laments Lack of Legal Protection,” February 1, 2010.

CHANGES TODAY WILL PROTECT FUTURE GENERATIONS OF OLDER ADULTS Unfortunately, even if all same-sex couples were offered QJSAs tomorrow, these changes would likely come too late for elders who are already retired. This is because QJSAs must be chosen before retirement so the payment amount can be reduced accordingly. It would likely be infeasible to offer these options retroactively. However, with more than half of today’s workers ages 5065 expecting to receive a pension from their current employers, QJSAs would allow them to protect those they love after retirement. Moreover, QPSAs would offer security to a loved one in case of death prior to retirement. Note that on July 8, 2010, the U.S. District Court of Massachusetts ruled DOMA unconstitutional in its lack of recognition of same-sex couples for the purposes of Social Security benefits, federal employee benefits and tax returns (Gill v. The Office of Personnel Management). This decision is expected to be appealed. 2 As outlined in the Pension Protection Act of 2006 and the Worker, Retiree and Employer Recovery Act of 2008. 1

POLICY SOLUTIONS Current inequities stem in part from a lack of relationship recognition for same-sex couples. Most same-sex couples cannot marry, but even where legal at the state level, the federal government does not recognize such marriages under the Defense of Marriage Act, resulting in same-sex spouses being treated as legal strangers for pension purposes.1 To provide older same-sex couples with access to pension plan benefits and other critical safety net programs, Congress must repeal DOMA and states need to establish marriage for all couples. However, there is no inherent reason to limit QJSAs and QPSAs to married couples. Indeed, LGBT and myriad other older adults would be able to protect their loved ones with a simple amendment to the Employee Retirement Income Security Act (ERISA). Paralleling the changes that allowed workers to designate non-spouse beneficiaries to inherit their tax qualified retirement plan,2 ERISA should allow employees to designate a “non-spouse joint survivor” for QJSAs or QPSAs. This would allow any person receiving a pension to electively choose any other individual for a QJSA or QPSA (e.g., two financially interdependent siblings should also be able to designate each other). It should be mandatory that businesses offer this option as part of their pension plans. Finally, regardless of current law, fair-minded employers can also electively offer QJSAs and QPSAs to LGBT employees and other domestic partners.

LGBT older adults are often denied pension plan options that provide financial protections for a surviving partner - even though LGBT employees earn their pensions through the same hard work and financial contributions as their heterosexual counterparts. The lack of pension income can devastate a surviving partner in the event of a death, especially given that LGBT elders are poorer and less financially secure than American elders as a whole. Even when both partners are healthy, LGBT older adults are denied the peace of mind that comes from knowing that a surviving partner will receive an adequate living income upon the death of the pension holder. One of eleven issue briefs based on the SAGE/MAP report Improving the Lives of LGBT Older Adults.