The Health of LGBT People: Building a Foundation for Understanding 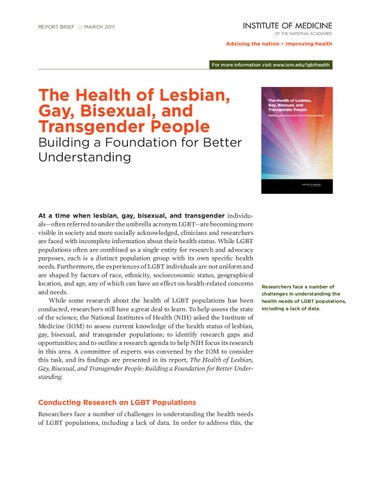 The Health of Lesbian, Gay, Bisexual, and Transgender People

Building a Foundation for Better Understanding

At a time when lesbian, gay, bisexual, and transgender individuals—often referred to under the umbrella acronym LGBT—are becoming more visible in society and more socially acknowledged, clinicians and researchers are faced with incomplete information about their health status. While LGBT populations often are combined as a single entity for research and advocacy purposes, each is a distinct population group with its own specific health needs. Furthermore, the experiences of LGBT individuals are not uniform and are shaped by factors of race, ethnicity, socioeconomic status, geographical location, and age, any of which can have an effect on health-related concerns and needs. While some research about the health of LGBT populations has been conducted, researchers still have a great deal to learn. To help assess the state of the science, the National Institutes of Health (NIH) asked the Institute of Medicine (IOM) to assess current knowledge of the health status of lesbian, gay, bisexual, and transgender populations; to identify research gaps and opportunities; and to outline a research agenda to help NIH focus its research in this area. A committee of experts was convened by the IOM to consider this task, and its findings are presented in its report, The Health of Lesbian, Gay, Bisexual, and Transgender People: Building a Foundation for Better Understanding.

Conducting Research on LGBT Populations Researchers face a number of challenges in understanding the health needs of LGBT populations, including a lack of data. In order to address this, the

Researchers face a number of challenges in understanding the health needs of LGBT populations, including a lack of data.

hensive research training program that would raise awareness of LGBT health issues among researchers. The committee recommends that the NIH encourage researchers to include sexual and gender minorities explicitly in their samples, using the NIH policy on the inclusion of women and racial and ethnic minorities in clinical research as a model. This would prompt researchers to consider these groups more frequently when applying for research grants.

Implementing a Research Agenda As an overarching goal, the committee calls for implementing a research agenda to advance knowledge and understanding of LGBT health. To account for the many areas in LGBT health that require research, the committee’s research agenda reflects the most pressing areas, specifically demographic research, social influences, health care inequities, intervention research, and transgender-specific health needs (see figure for priority research areas). To develop a more complete understanding of LGBT health issues, the committee recommends applying cross-cutting perspectives to the priority research areas to further the evidence base on LGBT health. The committee’s work was guided by the following four conceptual perspectives: • the minority stress model calls attention to the chronic stress that sexual and gender minorities may experience as a result of their stigmatization; • the life course perspective looks at how events at each stage of life influence subsequent stages; • the intersectionality perspective examines an individual’s multiple identities and the ways in which they interact; and • the social ecology perspective emphasizes that individuals are surrounded by spheres of influence, including families, communities, and society.

Overall, the committee finds that research has not been conducted evenly across sexual and gender minority populations, with more research focusing on gay men and lesbians than on bisexual and transgender people. Research has not adequately examined subpopulations, particularly racial and ethnic groups. And most research has been conducted among adults, with a modest number of studies on adolescents and less attention on LGBT elders. From the available research, the committee noted a number of findings. Among others, these

While there are many different ways to present information about the health status of LGBT populations, the committee used the life course perspective to examine the health status of these populations in three life stages: childhood and adolescence, early/middle adulthood, and later adulthood. At each life stage, the committee studied mental health, physical health, risks and protective factors, health services, and contextual influences.

A number of different conceptual perspectives can be applied to priority areas of research in order to further the evidence base for LGBT health issues.

include that LGBT youth may have an elevated risk for attempted suicide and depression, and sexual minority youth may have higher rates of substance use than heterosexual youth; that one of the barriers to accessing quality health care for LGBT adults is a lack of providers who are knowledgeable about LGBT health needs as well as a fear of discrimination in health care settings; and that LGBT elders are more likely to rely on friends and others as caregivers rather than biological family members, at least in part because they are less likely to have children.

Conclusion Lesbian, gay, bisexual, and transgender individuals have unique health experiences and needs, but as a nation, we do not know exactly what these experiences and needs are. To advance understanding of the health needs of all LGBT individuals, researchers need more data about the demographics of these populations, improved methods for collecting and analyzing data, and an increased participation of sexual and gender minorities in research. Building a more solid evidence base for LGBT health concerns will not only benefit LGBT individuals, but also add to the repository of health information we have that pertains to all people. f

500 Fifth Street, NW Washington, DC 20001 TEL 202.334.2352 FAX 202.334.1412 www.iom.edu The Institute of Medicine serves as adviser to the nation to improve health. Established in 1970 under the charter of the National Academy of Sciences, the Institute of Medicine provides independent, objective, evidence-based advice to policy makers, health professionals, the private sector, and the public. Copyright 2011 by the National Academy of Sciences. All rights reserved.

The Health of LGBT People: Building a Foundation for Understanding

The Health of Lesbian, Gay, Bisexual, and Transgender People: Building a Foundation for Understanding, a new report from the IOM, recommends steps to ensure that clinical researchers identify and address the needs of LGBT populations. The report was written in response to a request from the National Institutes of Health for guidance on researching LGBT health issues.