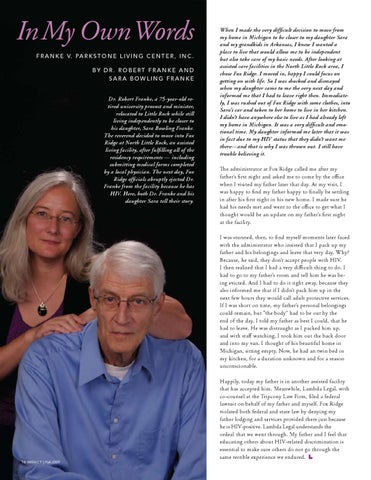 In My Own Words F R A N K E V. PA R K S T O N E L I V I N G C E N T E R , I N C . BY DR. ROBERT FRANKE AND SARA BOWLING FRANKE Dr. Robert Franke, a 75-year-old retired university provost and minister, relocated to Little Rock while still living independently to be closer to his daughter, Sara Bowling Franke. The reverend decided to move into Fox Ridge at North Little Rock, an assisted living facility, after fulﬁlling all of the residency requirements — including submitting medical forms completed by a local physician. The next day, Fox Ridge ofﬁcials abruptly ejected Dr. Franke from the facility because he has HIV. Here, both Dr. Franke and his daughter Sara tell their story.

When I made the very difﬁcult decision to move from my home in Michigan to be closer to my daughter Sara and my grandkids in Arkansas, I knew I wanted a place to live that would allow me to be independent but also take care of my basic needs. After looking at assisted care facilities in the North Little Rock area, I chose Fox Ridge. I moved in, happy I could focus on getting on with life. So I was shocked and dismayed when my daughter came to me the very next day and informed me that I had to leave right then. Immediately, I was rushed out of Fox Ridge with some clothes, into Sara’s car and taken to her home to live in her kitchen. I didn’t have anywhere else to live as I had already left my home in Michigan. It was a very difﬁcult and emotional time. My daughter informed me later that it was in fact due to my HIV status that they didn’t want me there—and that is why I was thrown out. I still have trouble believing it. The administrator at Fox Ridge called me after my father’s first night and asked me to come by the office when I visited my father later that day. At my visit, I was happy to find my father happy to finally be settling in after his first night in his new home. I made sure he had his needs met and went to the office to get what I thought would be an update on my father’s first night at the facility. I was stunned, then, to find myself moments later faced with the administrator who insisted that I pack up my father and his belongings and leave that very day. Why? Because, he said, they don’t accept people with HIV. I then realized that I had a very difficult thing to do. I had to go to my father’s room and tell him he was being evicted. And I had to do it right away, because they also informed me that if I didn’t pack him up in the next few hours they would call adult protective services. If I was short on time, my father’s personal belongings could remain, but “the body” had to be out by the end of the day. I told my father as best I could, that he had to leave. He was distraught as I packed him up, and with staff watching, I took him out the back door and into my van. I thought of his beautiful home in Michigan, sitting empty. Now, he had an twin bed in my kitchen, for a duration unknown and for a reason unconscionable.

Happily, today my father is in another assisted facility that has accepted him. Meanwhile, Lambda Legal, with co-counsel at the Tripcony Law Firm, filed a federal lawsuit on behalf of my father and myself. Fox Ridge violated both federal and state law by denying my father lodging and services provided there just because he is HIV-positive. Lambda Legal understands the ordeal that we went through. My father and I feel that educating others about HIV-related discrimination is essential to make sure others do not go through the same terrible experience we endured.

In My Own Words: Franke v. Parkstone Living Center, Inc.

Dr. Robert Franke, a 75-year-old retired university provost and minister, relocated to Little Rock while still living independently to be closer to his daughter, Sara Bowling Franke. The next day, Fox Ridge ofﬁcials abruptly ejected Dr. Franke from the facility because he has HIV. Here, both Dr. Franke and his daughter Sara tell their story.