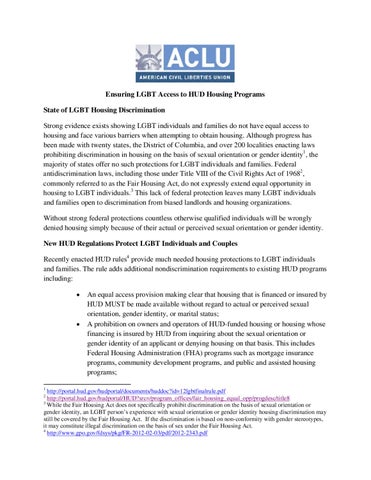 An equal access provision making clear that housing that is financed or insured by HUD MUST be made available without regard to actual or perceived sexual orientation, gender identity, or marital status; A prohibition on owners and operators of HUD-funded housing or housing whose financing is insured by HUD from inquiring about the sexual orientation or gender identity of an applicant or denying housing on that basis. This includes Federal Housing Administration (FHA) programs such as mortgage insurance programs, community development programs, and public and assisted housing programs;

Clarifying the definition of eligible “family” to include individuals and couples who are, or are perceived to be, lesbian, gay, bisexual, and transgender. This extends the nondiscrimination provisions against families to include these individuals; Adding sexual orientation and gender identity to the list of characteristics that a lender may not take into consideration when determining the adequacy of an individual seeking an FHA-insured mortgage.

This article discusses the new HUD regulations that aim to protect LGBT individuals and couples. In addition, the article overviews what to do if one suspects that housing discrimination is occurring.