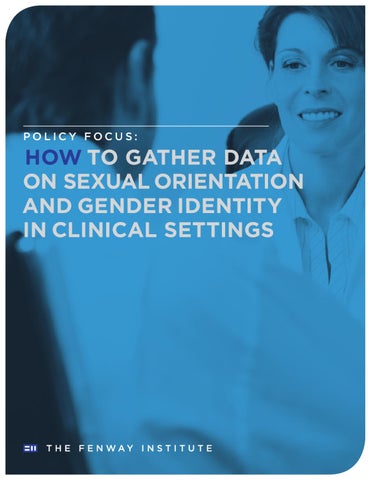 In this brief, we discuss two methods for gathering sexual orientation and gender identity from patients, by asking questions on the patient registration (intake) form, and by requiring that providers gather this information directly from patients during medical visits, recording responses in the electronic medical record. HOW TO ASK PATIENTS ABOUT SEXUAL ORIENTATION AND GENDER IDENTITY REGISTRATION (INTAKE) FORMS

Patients should be asked about how they self-identify as to their sexual orientation and gender identity on intake forms. Questions should be included in the demographic part of the form, alongside questions about race, sex, and date of birth. Patients should also be assured that this information will be kept confidential, and allows health care providers to provide them with the most relevant prevention information and screen them for health conditions disproportionately affecting members of their demographic group. Examples of such health conditions that correlate with race, ethnic background, sex, or sexual orientation can be given, such as sickle cell anemia, Taysachâ&amp;#x20AC;&amp;#x2122;s disease, or cervical cancer. Fenway Health, a federally qualified health center in Boston, Massachusetts has been testing two versions of a sexual orientation identity question as well as a transgender identity question in 2011. The U.S. Department of Health and Human Services (HHS) will field test a sexual identity question on the National Health Interview Survey (NHIS) in early 2012. It is hoped that it will be added as a standard question to NHIS in fall 2012. HHS is also conducting research on how to measure gender identity and has committed to adding gender identity to a battery of demographic questions alongside sexual orientation, age, sex, and race/ethnicity, etc.

Ideally health care organizations will include sexual identity and gender identity questions on a field in the registration form. If the patient answers the questions, this is one less question the provider must ask about during patient visits, although further discussion may be desired. However, if the patient leaves these questions blank, the provider should ask them again during the visit. Providers may want to ask these questions periodically, as sexual and gender identity and sexual attraction can change over the life course.1 It is important that staff treat all patients with respect in their interactions with patients. This will ensure a greater likelihood that patients will respond accurately and honestly to sensitive questions.

When seeing a patient for the first time, providers should also ask questions about sexual orientation, behavior, and gender identity during the patient’s visit. Providers should start with an open-ended question, such as “Tell me a bit about yourself.” In talking about his or her life and family, the patient may bring up issues related to sexual orientation or gender identity.2 Providers can facilitate open conversations about being lesbian, gay, bisexual, or transgender by sending a message that LGBT people are welcome in their medical offices. This can be signaled by posting a rainbow flag, the logo of the Gay and Lesbian Medical Association, and/or a social marketing campaign showing affirming images of LGBT people.3 Providers can also use inclusive or neutral language, such as “Do you have a partner?” instead of asking “Are you married?” which in most states and to most Providers can facilitate people still refers to heterosexual relationships.

Providers should ask permission to include information about a patient’s sexual orientation and gender identity in the medical record, remind the patient of its importance to quality health care, and assure him or her that the information will be kept confidential.

If self-disclosure does not come up in response to general questions such as those proposed above, further questions can be embedded in the sexual history. Such a history should address sexual risk behavior as well as sexual health,4 sexual orientation (including identity, behavior, and attraction), and gender identity. A provider can start the conversation by asking,

“Do you have any concerns or questions about your sexuality, sexual orientation, or sexual desires?”5 It may help put the patient at ease to preface these questions with a statement that these are questions you ask all patients, and that the information is important to helping you provide the best quality care. For example, you could say: “I am going to ask you some questions about your sexual health and sexuality that I ask all my patients. The answers to these questions are important for me to know how to help keep you healthy. Like the rest of this visit, this information is strictly confidential.”6 Most patients are forthcoming with information, particularly once they understand why they are being asked. The provider can ask “Do you have a partner or a spouse?” or “Are you currently in a relationship?” He or she can also ask:

Are you sexually active? When was the last time you had sex? When you have sex, do you do so with men, women, or both? How many sexual partners have you had during the last year? Do you have any desires regarding sexual intimacy that you would like to discuss? Providers should also ask whether patients are transgender or have genderrelated concerns. For example: “Because so many people are affected by gender issues, I ask patients if they have any relevant concerns. Anything you say will be kept confidential. If this topic isn’t relevant to you, tell me and I will move on.”7

Once providers establish an open rapport with clients and they feel comfortable discussing their homosexuality, bisexuality, and/or gender identity, providers should offer care that addresses the particular health issues and disparities facing LGBT people. Guidelines for providing primary care to LGBT patients can be found in The Fenway Guide to Lesbian, Gay, Bisexual and Transgender Health, published by the American College of Physicians.8 BARRIERS TO COLLECTING DATA ON LGBT IDENTITY, INCLUDING PRIVACY CONCERNS ON INTAKE FORMS

LGBT patients may be hesitant to disclose information about their sexual orientation or gender identity due to fears about confidentiality and privacy.9 These fears may have to do with the fact that one hands a filled out intake/registration form to a medical office staff person. Patients may be reluctant to provide such personal information to office staff in a waiting room, because it feels less private than answering the question of a provider in an examination room. The Process of Gathering LGBT Data in Clinical Settings

Privacy and confidentiality concerns are exacerbated by the increasing computerization of health records. The U.S. government is seeking the full computerization of Americans’ health records by 2014. Funded by the 2009 economic stimulus program and the 2010 health care reform legislation, the shift underway to electronic health records (EHR) and health information exchanges (HIE) could dramatically improve healthcare, increase providers’ ability to determine the most effective treatments, and advance health science.10 It also poses new threats to patient data. For example, the electronic health care records of 4.9 million active and retired military members and their families may have been exposed in a major data breach reported in September 2011. Backup tapes of these EHRs, handled by Science Applications International Corporation, were Given the connection 11 reported “lost.”

However, with the development of proper of same-sex behavior standards for encoding medical information, and health, asking about along with the development of best practices for how to manage a computer infrastructure these issues is integral to by institutions like the National Institutes for Standards and Technology, these threats are providers’ ability to care manageable.12 Sections 1411(g), 1411(c)(2), for their LGBT patients. and 1414(a)(1) of the 2010 Patient Protection and Affordable Care Act provide privacy and security protections for information used by HIEs.13 A rule proposed in July 2011 would mandate “appropriate security and privacy protections” for any “personally identifiable information,” including sensitive health information, that is collected and used in the provision of health care.14 And with EHRs there is greater control over who views and copies them than with traditional paper medical records. Audit reports can be run that show who has viewed information in a patient’s

EHR. Blocks can be put in place that prevent the printing of certain document types. Such safety controls do not exist with paper records. During provider-patient interaction there are several potential barriers to gathering this information. Providers may not be comfortable asking these questions, or lack knowledge on how to elicit this information. Some worry LGBT people will be reluctant to disclose due to anti-LGBT stigma and prejudice. This may be true, and as a result not all LGBT patients will disclose their sexual or gender identity. However, this should not prevent providers from asking such questions and trying to gather such data. As society becomes more tolerant and accepting of LGBT people, more and more LGBT patients will self-disclose. In the meantime, the data we get from those who do self-disclose allows us to better understand the unique health needs and experiences of LGBT people. Providers may worry that they donâ&amp;#x20AC;&amp;#x2122;t have the time for these discussions. High patient volume may be a barrier to comprehensive, quality data capture.15 However, given the connection between open disclosure of same-sex behavior and health, asking about these issues is integral to providersâ&amp;#x20AC;&amp;#x2122; ability to care for their LGBT patients. USING SELF-ADMINISTERED COMPUTER-BASED QUESTIONNAIRES TO GATHER PATIENT REPORTED OUTCOMES

Research shows that respondents are 1.5 to 1.6 times more likely to report samesex behavior and attraction on an audio computer assisted self-interviewing survey than in response to questions asked by an interviewer.16 The reporting of Patient Reported Outcomes (PROs) on computer tablets such as iPads may also garner more truthful responses to sensitive questions, not only about sexual identity and behavior but also about substance use and sexual risk behavior. Self-provided PROs may also overcome barriers to data gathering posed by high patient volume in clinical settings.17 PROs are standardized, validated patient questionnaires administered directly to patients using touch-screen computerbased administration.18

Kozak, Mugavero, Ye et al. reported higher rates of prior substance use and prior tobacco use on PROs than EHRs among a sample of 782 HIV patients at a Birmingham, Alabama clinic. However, current reported substance use and current depression were much higher on electronic health records (EHRs) than on PROs.19 The findings, in other words, are mixed on the relative value of PROs compared with EHRs in eliciting disclosure of stigmatized behavior or conditions. More research is necessary. CONCLUSION GATHERING LGBT DATA IN CLINICAL SETTINGS IS A CRUCIAL STEP TOWARD REDUCING HEALTH DISPARITIES AND PROMOTING HEALTH EQUITY

While the science is not yet perfect and some LGBT patients inevitably will not self-disclose, asking about sexual orientation and gender identity in clinical settings will improve health outcomes of LGBT patients, and will help advance our understanding of LGBT health. The asking of such questions both on registration forms and during patient exams will alert providers to screen patients for conditions disproportionately affecting LGBT people, and to provide preventive health education appropriate to LGBT patients.

This publication addresses the issue of how to obtain sexual orientation and gender identity data in clinical settings. It provides guidance on how to ask questions on patient registration forms and how clinicians can ask questions during medical visits. This second brief addresses concerns about confidentiality with EHRs and other potential barriers to collecting data on LGBT identity.