The HIV/AIDS Epidemic in the United States 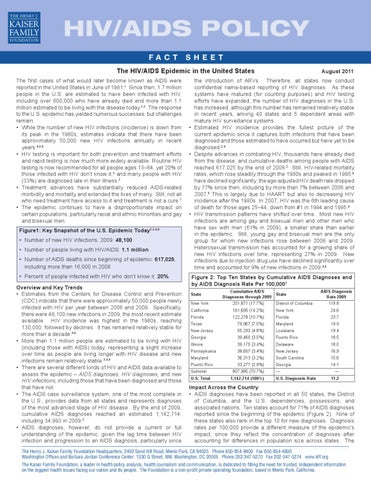 The HIV/AIDS Epidemic in the United States The first cases of what would later become known as AIDS were reported in the United States in June of 1981.1 Since then, 1.7 million people in the U.S. are estimated to have been infected with HIV, including over 600,000 who have already died and more than 1.1 million estimated to be living with the disease today.2,3 The response to the U.S. epidemic has yielded numerous successes, but challenges remain: • While the number of new HIV infections (incidence) is down from its peak in the 1980s, estimates indicate that there have been approximately 50,000 new HIV infections annually in recent years.4,5,6 • HIV testing is important for both prevention and treatment efforts and rapid testing is now much more widely available. Routine HIV testing is now recommended for all people ages 13–64, yet 20% of those infected with HIV don’t know it,3 and many people with HIV (33%) are diagnosed late in their illness.2 • Treatment advances have substantially reduced AIDS-related morbidity and mortality and extended the lives of many. Still, not all who need treatment have access to it and treatment is not a cure.7 • The epidemic continues to have a disproportionate impact on certain populations, particularly racial and ethnic minorities and gay and bisexual men. Figure1: Key Snapshot of the U.S. Epidemic Today2,3,4,6 • Number of new HIV infections, 2009: 48,100 • Number of people living with HIV/AIDS: 1.1 million • N umber of AIDS deaths since beginning of epidemic: 617,025, including more than 16,000 in 2008 • Percent of people infected with HIV who don’t know it: 20% Overview and Key Trends • Estimates from the Centers for Disease Control and Prevention (CDC) indicate that there were approximately 50,000 people newly infected with HIV per year between 2006 and 2009. Specifically, there were 48,100 new infections in 2009, the most recent estimate available. HIV incidence was highest in the 1980s, reaching 130,000, followed by declines. It has remained relatively stable for more than a decade.4,6 • More than 1.1 million people are estimated to be living with HIV (including those with AIDS) today, representing a slight increase over time as people are living longer with HIV disease and new infections remain relatively stable.3,4,6 • There are several different kinds of HIV and AIDS data available to assess the epidemic – AIDS diagnoses, HIV diagnoses, and new HIV infections, including those that have been diagnosed and those that have not. • The AIDS case surveillance system, one of the most complete in the U.S., provides data from all states and represents diagnoses of the most advanced stage of HIV disease. By the end of 2009, cumulative AIDS diagnoses reached an estimated 1,142,714, including 34,993 in 2009.2 • AIDS diagnoses, however, do not provide a current or full understanding of the epidemic, given the lag time between HIV infection and progression to an AIDS diagnosis, particularly since

the introduction of ARVs. Therefore, all states now conduct confidential name-based reporting of HIV diagnoses. As these systems have matured (for counting purposes) and HIV testing efforts have expanded, the number of HIV diagnoses in the U.S. has increased, although this number has remained relatively stable in recent years, among 40 states and 5 dependent areas with mature HIV surveillance systems. • Estimated HIV incidence provides the fullest picture of the current epidemic since it captures both infections that have been diagnosed and those estimated to have occurred but have yet to be diagnosed.2,4 • Despite advances in combating HIV, thousands have already died from the disease, and cumulative deaths among people with AIDS reached 617,025 by the end of 2008.2 Still, HIV-related mortality rates, which rose steadily through the 1980s and peaked in 1995,8 have declined significantly; the age-adjusted HIV death rate dropped by 77% since then, including by more than 7% between 2006 and 2007.8 This is largely due to HAART but also to decreasing HIV incidence after the 1980s. In 2007, HIV was the 6th leading cause of death for those ages 25–44, down from #1 in 1994 and 1995.9 • HIV transmission patterns have shifted over time. Most new HIV infections are among gay and bisexual men and other men who have sex with men (61% in 2009), a smaller share than earlier in the epidemic. Still, young gay and bisexual men are the only group for whom new infections rose between 2006 and 2009. Heterosexual transmission has accounted for a growing share of new HIV infections over time, representing 27% in 2009. New infections due to injection drug use have declined significantly over time and accounted for 9% of new infections in 2009.4,6 Figure 2: Top Ten States by Cumulative AIDS Diagnoses and by AIDS Diagnosis Rate Per 100,0002 State

Impact Across the Country • AIDS diagnoses have been reported in all 50 states, the District of Columbia, and the U.S. dependencies, possessions, and associated nations. Ten states account for 71% of AIDS diagnoses reported since the beginning of the epidemic (Figure 2). Nine of these states also rank in the top 10 for new diagnoses. Diagnosis rates per 100,000 provide a different measure of the epidemic’s impact, since they reflect the concentration of diagnoses after accounting for differences in population size across states. The

District of Columbia has the highest AIDS diagnosis rate in the nation. Seven of the top 10 states by AIDS diagnosis rate are in the South.2 • By region, the Northeast had the highest AIDS diagnosis rate per 100,000 in 2009 (14.8), followed by the South (13.9), West (8.2), and Midwest (6.6). The South accounted for almost half (45%) of new AIDS diagnoses in 2009 and has the greatest number of people estimated to be living with AIDS, followed by the Northeast, West, and Midwest.2 • AIDS diagnoses are concentrated primarily in large U.S. metropolitan areas (more than 80% cumulatively and in 2009).2 • A recent analysis of data from 24 cities with high AIDS prevalence found that 2% of heterosexuals were infected with HIV. The study also showed that HIV prevalence was higher among those with less education and lower incomes, and among the unemployed.10 Impact on Racial and Ethnic Minorities11 • Racial and ethnic minorities have been disproportionately affected by HIV/AIDS since the beginning of the epidemic, and represent the majority of new AIDS diagnoses, new HIV infections, people living with HIV/AIDS, and AIDS deaths.2,3,4 • Blacks and Latinos account for a disproportionate share of HIV infections, relative to their size in the U.S. population (Figure 3).4,5,12 • Based on the CDC’s estimate of HIV/AIDS prevalence,3 there are approximately 545,000 Blacks living with HIV/AIDS in the U.S. Analysis of national household survey data found that 2% of Blacks in the U.S. were HIV positive, higher than any other group.13 • Blacks also have the highest rate of new HIV infections and new AIDS diagnoses of any racial/ethnic group. The AIDS diagnosis rate per 100,000 for Blacks in 2009 was more than 9 times that of whites.2 The rate of new HIV infections was nearly 8 times greater among Blacks than among whites in 2009.4 Figure 3: New HIV Infections &amp; U.S. Population, by Race/Ethnicity, 20094,5,12 New HIV Infections 32%

• Blacks accounted for 57% of deaths due to HIV in 2007; Latinos accounted for 13%.14 Survival after an AIDS diagnosis is lower for Blacks than for most other racial/ethnic groups, and Blacks have had the highest age-adjusted death rate due to HIV disease throughout most of the epidemic.2,8,9 • HIV was the 4th leading cause of death for Black men and 3rd for Black women, ages 25–44, in 2007, ranking higher than their respective counterparts in any other racial/ethnic group.9 Impact on Women and Young People • Today, women represent a larger share of new HIV infections compared to earlier in the epidemic. HIV incidence among women increased gradually until the late 1980s, declined during the early 1990s, and has remained relatively stable since, at approximately a quarter of new infections (23% in 2009)4,15 Based on the CDC’s most recent estimates, more than 290,000 women are living with HIV/AIDS in the U.S.3 • Women of color are particularly affected. Black women accounted for two thirds (64%) of new AIDS diagnoses among women in 2009;

Latinas represented 18% and white women, 15%.2,11 Black women also accounted for the largest share of new HIV infections among women in 2009 (57%).4,5 • Teens and young adults under the age of 30 continue to be at risk, with those between the ages of 13 and 29 accounting for 39% of new HIV infections in 2009, the largest share of any age group.4 Most young people are infected sexually.16 • Among young people, minorities have been particularly affected. Black teens represented 68% of AIDS diagnoses among 13–19 year-olds in 2009; Latino teens represented 21%.2 • Perinatal HIV transmission, from an HIV infected mother to her baby, has declined significantly in the U.S., largely due to ARVs which can prevent mother-to-child transmission.2,17 Impact on Gay and Bisexual Men • While estimates show that gay and bisexual men and other men who have sex with men comprise only about 2% of the U.S. population, this group accounts for most new HIV infections (61% in 2009).4,5 • White gay and bisexual men accounted for the largest number of new infections (11,400) in 2009, followed by Black gay and bisexual men (10,800).4 • Younger gay and bisexual men (ages 13–29) are at particular risk. In 2009, this group accounted for 27% of all new HIV infections and 44% of infections among all gay and bisexual men, a share that was even higher among Blacks (60%).4,5 • Gay and bisexual men between 13 and 29 are the only group for whom new HIV infections increased between 2006 and 2009. The increase was largely driven by a significant rise in new infections among young, Black gay and bisexual men—a group that experienced a 48% increase between 2006 and 2009.4 • Studies have also found high HIV incidence and prevalence among gay and bisexual men in some cities, particularly Black and Latino men, many of whom did not know they were infected.18 The U.S. Government Response • In FY 2010, U.S. federal funding to combat HIV totaled $26 billion. Of this, 50% is for care, 10% for research, 10% for cash and housing assistance, 3% for prevention, and 25% for the international epidemic.19 • Key programs that provide health insurance coverage, care, and support to people with HIV in the U.S. include Medicaid, Medicare, the Ryan White Program, and HOPWA, the Housing Opportunities for Persons with HIV/AIDS Program. Social Security’s income programs for those who are disabled (SSI and SSDI) are also important sources of support. • A variety of federally and state-supported prevention services are provided by state and local health departments and community organizations. • In July 2010, the U.S. Government released the National HIV/AIDS Strategy, the first comprehensive plan for addressing the epidemic in the U.S. The strategy has three primary goals: reduce new HIV infections; increase access to care and improve health outcomes; and reduce HIV-related health disparities.20 ______________

This publication (#3029-12) is available on the Kaiser Family Foundation’s website at www.kff.org.

The HIV/AIDS Epidemic in the United States

A 2 page fact sheet, published in August 2011, with current statistics.