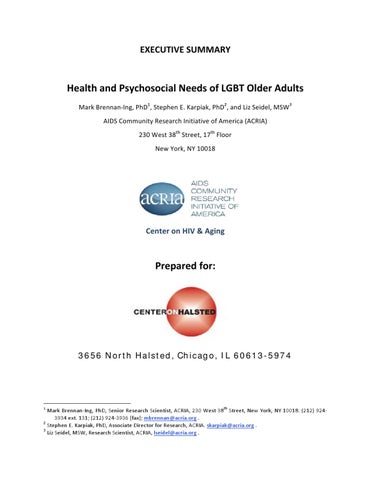 EXECUTIVE SUMMARY This research study provides one of the most comprehensive descriptions of the health, well‐being and social context of Lesbian, Gay, Bisexual, and Transgender (LGBT) older adults. This effort describes the characteristics of an aging LGBT population residing in Chicago, IL. These data should be used to facilitate policy‐making and program decisions to address the current and future needs of these individuals. The study provides in‐depth data on the health status of the aging LGBT community, including sexual health and concomitant risk behaviors, as well as the challenges of living with HIV. Detailed information was collected on social networks which are critical sources of support for an aging population, regardless of sexual identity. These older LGBT adults will also need to access community‐ based formal services as they age. Consequently, this study examines the service utilization patterns and the service needs of this older LGBT group, including unmet need in the past year. The sample of just over 200 individuals had an average age of 60, 71% were men, 24% were women, and 5% were transgender or intersex. One‐third reported being HIV‐positive and 94% of this group were men. Those who were HIV‐positive reported an average age of 55 years, whereas those who were HIV‐negative were older, having an average age of 62. •

Eighty‐percent of the sample identified as gay or lesbian, 14% as bisexual, and 5% as queer/questioning.

One‐third was Black or African American (32%), with the remaining 62% being primarily White.

Over half of the sample had a college degree or post‐graduate education.

In terms of work status, 29% were currently working, 13% were unemployed, and 28% were retired. Nearly one‐third were on disability.

A sizeable minority were experiencing income inadequacy, with 15% reporting that they did not have enough money to cover expenses, and an additional 46% just managing to get by.

Forty‐two percent were home owners and 46% renters, comparable to the 44% home ownership rate in Chicago obtained from the 2010 Census.

The majority (55%) indicated that they were not currently in a relationship and 62% reported living alone.

The majority (76%) of the sample rated their health as good or excellent. The older LGBT adults with HIV, though younger, reported significantly more health problems on average. •

Most (57 %) accessed care from a private doctor/clinic and almost 1/3 received heath services from a public clinic or hospital.

Almost half of the HIV+ group were presently smoking compared to 13% for those who were not positive.

Current use of alcohol (63%) and pain killers (25%) did not differ significantly by HIV status.

Twenty‐percent of the sample reported that they were currently in recovery for a drug or alcohol problem.

Half of this group had received an AIDS diagnosis.

Nearly all (97%) were on antiretroviral therapy and the majority reported CD4 counts over 500 indicating their HIV infection was well controlled.

On average, older LGBT adults reported 11 people in their social networks, consisting of parents, family members, friends and neighbors. However, as documented in previous research, older LGBT adults tend to have friend‐centered networks consisting of “families‐of‐choice” and have less involvement with biological family members compared to their heterosexual peers. •

Friends were the most likely to be able to provide assistance with day‐to‐day tasks as well as provide emotional support and advice.

Older LGBT adults were much more likely to report receiving emotional support as compared to help with instrumental tasks (43% to 56%).

Over one‐quarter (27%) of older LGBT adults indicated that they and their neighbors helped each other on a regular basis.

Over 80% of the study sample said they did not currently need or use caregiving assistance. About 20% of the older adults with HIV indicated they could use caregiving support.

Nearly one‐quarter had provided caregiving assistance to someone during the past 5 years.

Older LGBT adults tended to be involved with a partner who was younger (64%).

Older adults with HIV were significantly more likely to indicate sex was extremely important as compared to those without HIV, but there were no differences between groups in terms of how often they thought about sex.

About 1/3 said that their frequency of sexual activity was what they expected and 60% reported not having sex as often as desired.

Forty‐one percent of older LGBT adults indicated that they had avoided sexual activity, either because of lack of interest or physical problems (e.g., erectile dysfunction).

When asked why they would engage in unprotected sex, 14% of those with HIV said because they were depressed, while only 2% of those without HIV gave that as a reason.

The study examined the utilization and satisfaction with services at the Center on Halsted as well as those at local government offices and agencies, HIV‐related services and AIDs Service Organizations (ASOs), health‐related services, and other older adult community‐based services. •

The most frequently used government services included the Social Security Office (43%), Department for Family and Support Services, Senior Division/Department on Aging (27%), Housing Authority (21%) and Medicare and Medicaid Offices (21% and 20%, respectively). Use of government offices and agencies was greater by the HIV+ older adult.

There were only two instances where HIV status was significantly related to use of health and long‐term care services. Older HIV+ adults were significantly more likely to have used case management (61%) as compared to those without an HIV diagnosis (12%). Also, one‐in‐five HIV+ adults used drug and alcohol treatment/recovery in the past year as compared to 8% among non‐HIV infected older LGBT adults.

Senior centers were the most frequently mentioned other older adult community based service (25%). Clergy, meal/nutrition programs, and legal services were used by about one‐in‐five older LGBT adults during the previous year.

The non‐HIV infected older LGBT adults were more likely to use SAGE programming at COH, which may be related to the greater average age in this group.

Overall, satisfaction with COH services was high with the most highly rated service being the computer technology center, followed by SAGE social and educational programs, and SAGE congregate meals.

When asked what additional services they would like to see COH provide, the most frequently mentioned were assistance with housing and employment issues, more opportunities for socialization, and more programs aimed specifically at women.

Approximately one‐quarter were enrolled in Medicaid and Food Stamps and about one‐in‐five reported income support either through Supplemental Security Income (SSI) or Social Security Disability (SSD).

Only about one‐in‐ten had purchased long‐term care insurance, and fewer (3%) had private disability coverage.

Although 14% had served in the armed forces, only 7% received health care coverage through the Veterans Administration (VA).

Fifty‐eight percent of the sample reported at least one barrier to community‐based services. Older LGBT adults with HIV reported significantly greater number of barriers to services, on average, as compared with their non‐infected peers (3.9 vs. 2.2, respectively).

Service barriers included: 1) they did not think they would be eligible to receive free services (43%); 2) worry about the cost of services (32%); and 3) knowledge of available services and their location (36% and 24%, respectively).

Almost 30% thought getting services was confusing and/or difficult and a quarter thought that they would have to wait too long.

The most frequently mentioned organizational barrier was that staff was unhelpful or seemed unmotivated (21%).

Stigma and discrimination issues were mentioned by approximately one‐in‐ten, namely, feeling that staff did not like people like themselves or that they would not receive services if they tried.

HIV stigma also appears to be an issue, with one‐in‐five HIV+ older LGBT adults feeling “staff didn’t like people like them” as compared with only 6% of the non‐HIV diagnosed group.

Older HIV+ LGBT adults were also more likely to cite contextual issues, such as disclosure of their HIV status (18%), difficulty in making or keeping appointments (13%) and childcare issues (9%) as barriers to care.

Older LGBT adults were asked about their need for services in the past year from a list of commonly utilized health and social services, whether their needs had been met, and if so, who provided the help (e.g., family, community‐based organization). •

Half the sample identified socialization as their highest unmet need followed by about 1/4 who noted one of the following; getting to medical appointments, post‐hospital care, counseling and someone to call or visit regularly.

METHODOLOGY NOTES Recruitment of this convenience sample took place in Chicago, primarily at the Center on Halsted but also at various AIDS Service Organizations, health fairs and community events throughout the city. To qualify for participation an individual had to identify as lesbian, gay, bisexual or transgender (LGBT), be 50 years of age or older and speak English as their primary language. Recruitment yielded 233 participants, resulting in 211 usable surveys. Participants provided informed consent prior to data collection. The survey instrument was self‐ administered by hand using a printed copy. On average, participants took 45 to 60 minutes to complete the survey. After completing the survey they were debriefed and thanked for their participation. As an incentive participants received a $25 gift card for taking part in this research project. Research methods and materials were evaluated and approved by the Copernicus Group Independent Review Board (IRB). The survey instrument obtained information on the following areas: (1) demographic characteristics; (2) HIV/AIDS status; (3) physical conditions; (4) informal social supports; (5) caregiving (both receiving and providing care); (6) formal service utilization; (7) mental health; (8) substance use; (9) sexual behaviors; (10) health‐related quality of life; and (11) religion/spirituality. Whenever possible standardized measures with known psychometric properties were used to insure validity and for comparison with other published data. Questions were developed based on items in Research on Older Adults with HIV (ROAH) 4 study, National Social Life, Health and Aging Project (NSHAP)5, and the Caregiving among Older Lesbian, Gay, Bisexual and Transgender New Yorkers study6. When noted in the text, ‘significant’ refers to statistically significant differences at the p &lt;.05 level or greater.

This research study provides one of the most comprehensive descriptions of the health, well-being, and social context of Lesbian, Gay, Bisexual, and Transgender (LGBT) older adults, focusing on the aging LGBT population residing in Chicago, IL.