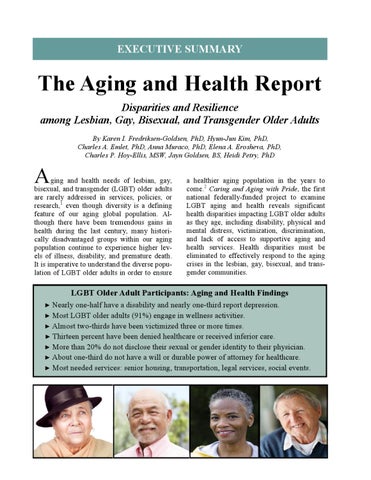 ging and health needs of lesbian, gay, bisexual, and transgender (LGBT) older adults are rarely addressed in services, policies, or research,1 even though diversity is a defining feature of our aging global population. Although there have been tremendous gains in health during the last century, many historically disadvantaged groups within our aging population continue to experience higher levels of illness, disability, and premature death. It is imperative to understand the diverse population of LGBT older adults in order to ensure

a healthier aging population in the years to come.2 Caring and Aging with Pride, the first national federally-funded project to examine LGBT aging and health reveals significant health disparities impacting LGBT older adults as they age, including disability, physical and mental distress, victimization, discrimination, and lack of access to supportive aging and health services. Health disparities must be eliminated to effectively respond to the aging crises in the lesbian, gay, bisexual, and transgender communities.

one-half have a disability and nearly one-third report depression. ► Most LGBT older adults (91%) engage in wellness activities. ► Almost two-thirds have been victimized three or more times. ► Thirteen percent have been denied healthcare or received inferior care. ► More than 20% do not disclose their sexual or gender identity to their physician. ► About one-third do not have a will or durable power of attorney for healthcare. ► Most needed services: senior housing, transportation, legal services, social events.

EXECUTIVE SUMMARY Closing the gap In the first phase of this project we utilized state-level population-based information from the Behavioral Risk Factor Surveillance System in Washington State (BRFSSWA) to compare key health indicators of lesbian, gay, and bisexual adults to heterosexuals.3-5 Next, to better understand the risk and protective factors impacting LGBT older adults, we collaborated with eleven community-based agencies across the country serving LGBT older adults to conduct the first national project on LGBT aging and health. The executive summary highlights key findings and the recommendations stemming from this ground-breaking project. To access the full report, visit our website at http:// caringandaging.org/ Health disparities revealed Higher rates of disability were found among lesbian, gay, and bisexual older adults, compared with heterosexuals of similar age utilizing state-level population-based information (BRFSS-WA). Lesbian, gay, and bisexual older adults experience higher rates of mental distress and are more likely to smoke and engage in excessive drinking than

EXECUTIVE SUMMARY â&amp;#x20AC;&amp;#x153;I have had an overwhelmingly positive experience with my gender transition so far, but I would say that my primary concern about the future is with access to healthcare and potential discrimination as a senior transgender person, especially if the need arises for emergency or long-term care.â&amp;#x20AC;? 56-year-old transgender woman risk of living alone. Older adults who live alone are at serious risk of social isolation, which in the general population is linked to poor mental and physical health, cognitive impairment, and premature chronic disease and death.7 Based on the state-level populationbased information, we found that 2% of adults age 50 and older self-identify as lesbian, gay, or bisexual. Given the number of adults age 50 and older living in the U.S., these findings suggest that more than 2 million older adults self-identify as lesbian, gay, or bisexual. Given the tremendous proportional growth of the age 50 and older population expected in the next few decades, the number of self-identified LGBT older adults will more than double by 2030. Emerging and resilient Contrary to the popular belief that LGBT older adults will not participate in research, 2,560 diverse LGBT older adults age 50 to 95, from eleven communitybased aging agencies across the country, joined in our national aging and health project. Despite the challenging historical context of their lives, LGBT older adults forge onward with resilience, living their lives and building their communities. Among the LGBT older adult particiThe Aging and Health Report

pants in our project, nearly 90% feel good about belonging to their communities, and many have at least moderate levels of social support. Most engage regularly in wellness activities (91%) and moderate physical activities (82%). Many attend spiritual or religious services or activities (38%), with bisexual men and transgender older adults most likely to participate. Such strengths are likely protective in terms of physical and mental health, counteracting the unique challenges that LGBT older adults face. The societal contributions of LGBT older adults need to be recognized. Of the participants, 41% of transgender older adults, 41% of bisexual men, 34% of gay men, and 6% of lesbian and bisexual women have served in the military. While family members related by blood or marriage play a primary role in the support of older adults in the general population, most LGBT older adults care for one another. LGBT older adult participants have distinct support networks, relying heavily on partners and friends, most of a similar age, to provide assistance and help as they age. Unlike the general population, among LGBT older adults rates of caregiving by both women (30%) and men (26%) are high. While the importance of friends in 3

EXECUTIVE SUMMARY orientation or gender identity to their primary physician, and bisexual older women and men are less likely to disclose than lesbian and gay older adults. The American Medical Association warns that physicians&#39; failure to recognize, and patients&#39; reluctance to disclose, can lead to failure to diagnose serious medical problems.11 Lack of disclosure prevents discussions about sexual health, risk of breast or prostate cancer, hepatitis, HIV risk, hormone therapy, and other risk factors. LGBT older adults often lack legal protections for their loved ones: about a third of the participants do not have a will (30%) or a durable power of attorney for healthcare (36%). Recognizing critical needs There is a consensus among the diverse LGBT older adults on the services most needed in their communities. Senior housing, transportation, legal services, social events, and support groups were consistently deemed the most needed services. It is important to note that among LGBT caregivers, supportive long-term care facilities are seen as one of the most critical needs. While services and programs assisting older adults are readily available in many

intended to support older adults in times of need are inaccessible to LGBT older adults and their loved ones. For example, same-sex partners do not have access to federal family leave benefits, equivalent Medicaid spend-

downs, Social Security benefits, bereavement leave, or automatic inheritance of jointly owned real estate and personal property.12 The term &quot;LGBTâ&amp;#x20AC;? is often used in research, yet the findings from this project illuminate that lesbian, gay, bisexual, and

â&amp;#x20AC;&amp;#x153;I need to know if there are resources for someone to bury me with my mom &amp; dad. How do I make arrangements, what type of arrangements, where do I turn for help? I have no siblings, no family.â&amp;#x20AC;? 63-year-old bisexual man communities, they are most often geared toward the general population and fail to take into account the unique circumstances facing LGBT older adults such as fear of discrimination and, often, the lack of children to help them. In addition, most existing aging services, public policies, and research initiatives The Aging and Health Report

EXECUTIVE SUMMARY Education Implement cultural competency training for healthcare, human service, housing, and legal professionals addressing LGBT older adults and caregivers, incorporating diversity in age, gender, gender identity, ethnicity, race, socio-economic status, geographic location, and ability. Educate and train caregivers, providers, and LGBT older adults in navigating existing laws, public policies, and regulations, e.g., the necessity of legal planning including wills and durable power of attorney for healthcare and the use of advocates if no one is available to act in such a capacity; and the recourse available if privacy is violated under HIPPA regulations in healthcare settings. Develop competencies necessary for effective practice with LGBT older adults and their families and advocate for the integration of these competencies as part of degree requirements in educational programs including medicine, nursing, social work, law, and other educational programs. Research Integrate sexual orientation, gender identity, and sexual behavior measures in aging-related research, including public health surveys. Develop innovative research methods to effectively reach out and obtain more representative samples of LGBT older adults. Collaborate with LGBT older adults and their communities to support capacity and accountability in research. Evaluate interventions designed to improve the mental and physical health of LGBT older adults. Expand the reach of strategies to promote healthy living, especially aimed at prevention and reduction of obesity, excessive drinking, and smoking. Ensure that HIV research, prevention, education, and treatment programs include older adults. Distinguish similarities and unique aging and health needs of distinct groups of LGBT older adults to develop tailored and responsive services and health promotion strategies. Investigate changes in LGBT health across the life course and how differing types of social structures and life events impact aging and health.

â&amp;#x20AC;&amp;#x153;The LGBT community has stepped up in the past to address coming out, AIDS, and civil rights. The next wave has to be aging.â&amp;#x20AC;? 63-year-old gay man

Caring and Aging with Pride, the first national project funded by the National Institutes of Health and the National Institute on Aging, provides new knowledge about the health and well-being of lesbian, gay, bisexual and transgender (LGBT) older adults. Across the nation 2,560 LGBT adults ranging in age from 50 to 95 years old participated in this project. To access the full report, visit http://lgbtagingcenter.org.