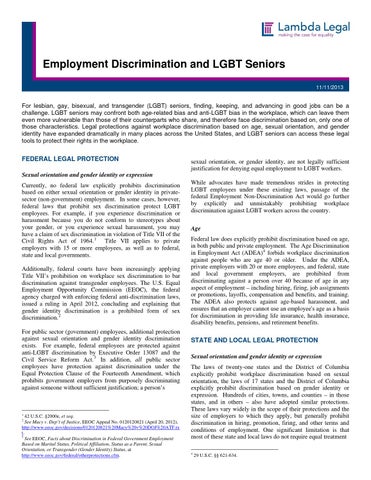 For lesbian, gay, bisexual, and transgender (LGBT) seniors, finding, keeping, and advancing in good jobs can be a challenge. LGBT seniors may confront both age-related bias and anti-LGBT bias in the workplace, which can leave them even more vulnerable than those of their counterparts who share, and therefore face discrimination based on, only one of those characteristics. Legal protections against workplace discrimination based on age, sexual orientation, and gender identity have expanded dramatically in many places across the United States, and LGBT seniors can access these legal tools to protect their rights in the workplace.

While advocates have made tremendous strides in protecting LGBT employees under these existing laws, passage of the federal Employment Non-Discrimination Act would go further by explicitly and unmistakably prohibiting workplace discrimination against LGBT workers across the country. Age Federal law does explicitly prohibit discrimination based on age, in both public and private employment. The Age Discrimination in Employment Act (ADEA) 4 forbids workplace discrimination against people who are age 40 or older. Under the ADEA, private employers with 20 or more employees, and federal, state and local government employers, are prohibited from discriminating against a person over 40 because of age in any aspect of employment – including hiring, firing, job assignments or promotions, layoffs, compensation and benefits, and training. The ADEA also protects against age-based harassment, and ensures that an employer cannot use an employee&#39;s age as a basis for discrimination in providing life insurance, health insurance, disability benefits, pensions, and retirement benefits.

STATE AND LOCAL LEGAL PROTECTION Sexual orientation and gender identity or expression The laws of twenty-one states and the District of Columbia explicitly prohibit workplace discrimination based on sexual orientation, the laws of 17 states and the District of Columbia explicitly prohibit discrimination based on gender identity or expression. Hundreds of cities, towns, and counties – in those states, and in others – also have adopted similar protections. These laws vary widely in the scope of their protections and the size of employers to which they apply, but generally prohibit discrimination in hiring, promotion, firing, and other terms and conditions of employment. One significant limitation is that most of these state and local laws do not require equal treatment 4

in providing certain types of employment-related benefits, and cannot be used to require, for example, an employer to provide benefits to a same-sex partner. For more information about the anti-discrimination laws in your state, visit http://www.lambdalegal.org/states-regions. Age Most states also have laws explicitly prohibiting age discrimination. Many state and local laws are even more protective of older workers than the ADEA. For example, some state laws may apply to employers with fewer than 20 employees, may protect workers in different age ranges, including people who are younger than 40, or may provide steeper penalties for their violation, including compensatory and punitive damages, which are not available under the ADEA. For more information, contact your stateâ&amp;#x20AC;&amp;#x2122;s human rights agency, a list of which can be found at http://www.justice.gov/crt/legalinfo/stateandlocal.php.

TAKING LEGAL ACTION Enforcing federal antidiscrimination laws begins with filing a complaint with the EEOC or with a state or local agency that has been certified to accept and process such complaints. You must file a complaint within 180 days of the discriminatory incident and cannot file directly in court without exhausting the process at the EEOC first. If state or local antidiscrimination laws apply, those provisions may have a different deadline for filing a charge with a state or local human rights agency â&amp;#x20AC;&amp;#x201C; or, by contrast, may not require filing an administrative charge with an agency before filing a lawsuit in court. The type of job you have, who your employer is, and whether you are subject to a contract or collective bargaining agreement can also affect the legal tools at your disposal. Because the specific laws and procedures are different from state to state, town to town, or even employer to employer, and because these issues can be more complicated than they seem, it is important to contact an attorney. For more information or a referral to an attorney in your area, contact Lambda Legalâ&amp;#x20AC;&amp;#x2122;s Help Desk at http://www.lambdalegal.org/help or 1-866-542-8336.

This fact sheet from Lambda Legal details the issues that LGBT older adults face in the workforce.