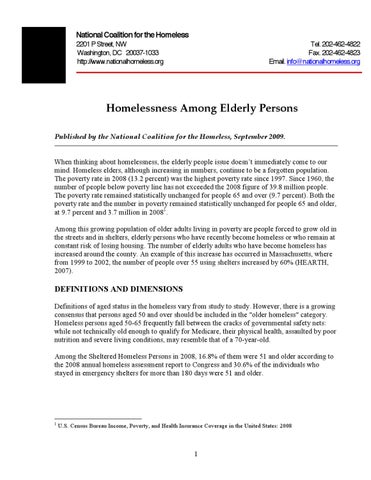 Homelessness Among Elderly Persons Published by the National Coalition for the Homeless, September 2009. When thinking about homelessness, the elderly people issue doesnâ&amp;#x20AC;&amp;#x2122;t immediately come to our mind. Homeless elders, although increasing in numbers, continue to be a forgotten population. The poverty rate in 2008 (13.2 percent) was the highest poverty rate since 1997. Since 1960, the number of people below poverty line has not exceeded the 2008 figure of 39.8 million people. The poverty rate remained statistically unchanged for people 65 and over (9.7 percent). Both the poverty rate and the number in poverty remained statistically unchanged for people 65 and older, at 9.7 percent and 3.7 million in 20081. Among this growing population of older adults living in poverty are people forced to grow old in the streets and in shelters, elderly persons who have recently become homeless or who remain at constant risk of losing housing. The number of elderly adults who have become homeless has increased around the county. An example of this increase has occurred in Massachusetts, where from 1999 to 2002, the number of people over 55 using shelters increased by 60% (HEARTH, 2007).

DEFINITIONS AND DIMENSIONS Definitions of aged status in the homeless vary from study to study. However, there is a growing consensus that persons aged 50 and over should be included in the &quot;older homeless&quot; category. Homeless persons aged 50-65 frequently fall between the cracks of governmental safety nets: while not technically old enough to qualify for Medicare, their physical health, assaulted by poor nutrition and severe living conditions, may resemble that of a 70-year-old. Among the Sheltered Homeless Persons in 2008, 16.8% of them were 51 and older according to the 2008 annual homeless assessment report to Congress and 30.6% of the individuals who stayed in emergency shelters for more than 180 days were 51 and older.

CAUSES Increased homelessness among elderly persons is largely the result of poverty and the declining availability of affordable housing among certain segments of the aging. Throughout the nation, there are at least 9 seniors waiting for every occupied unit of affordable elderly housing (HEARTH, 2007). Among households with very low incomes, households headed by an elderly person have almost a one-in-three chance of having worst case needs, despite the fact that housing assistance has been heavily directed toward elderly people. The number of older people experiencing homelessness in Massachusetts increased in the past decade. A study of selected urban areas in the USA, Australia, and England published in 2004 revealed that the City of Boston experienced a 39% increase since 1993 (Crane, 2004). Supplemental Security Income (SSI) greatly reduces the depth of poverty and hardship experienced by the low-income elderly. In 20082, the share of Americans who live in “deep poverty” — that is, whose cash incomes fall below half of the poverty line — reached its highest level since 1994. Some 5.7 percent of Americans — or 17.1 million of them — had incomes below half of the poverty line. Half of the poverty line in 2008 was $8,582 for a family of three and $11,013 for a family of four. The current maximum monthly SSI benefits ($674.00 for an individual) remains well below the poverty line. Furthermore, the waiting list for affordable senior housing is often three to five years. With less income for other necessities such as food, medicine, and health care, these populations are particularly vulnerable to homelessness. Overall economic growth will not alleviate the income and housing needs of elderly poor people, as returning to work or gaining income through marriage are often unlikely. Isolation also contributes to homelessness among older persons; in a 2004 survey, one half of the recipients of SSI (50 years and older) had been living alone before losing their homes (Crane, 2004).

CONSEQUENCES Once on the street, elderly homeless persons often find difficulty getting around. They distrust the crowds at shelters and clinics, and so become more likely to sleep on the street. Also, some shelters are located on upper floors, inaccessible to those who cannot climb stairs, and some require their guests to stand in long lines to get a bed, which many ailing elderly cannot manage. Studies show that elderly homeless persons are more prone to victimization and more likely to be ignored by law enforcement. In 2006, 27% of the homeless victims of violent crimes were between 50-59 years of age3 . Individuals 62 and older constituted only 2% of the country’s sheltered homeless population from February to April 2005, compared with 15% of the housed

population4. This smaller proportion could be the result of successful safety net programs such as Supplemental Security Income, Social Security, Medicare, and senior housing; it could also reflect the bodily harm caused by extended periods of homelessness, which can cause and exacerbate poor health. In addition to the worsening of physical health caused by homelessness, the homeless elderly are also more likely to suffer from depression or dementia. People who experience homelessness for long periods of time simply do not reach age 62 as often as the general population, accounting for their small numbers within the homeless population (U.S. Department of Housing and Urban Development, 2007). In a comparison study of homeless mortality rates in seven cities throughout North America and Europe, statistics showed that homeless persons are 3-4 times more likely to die than members of the general population. In all of the case studies evaluated, the average life expectancy for a person without permanent housing was placed between 42 and 52 years, far below the country’s average expectancy of 80 years. The review also indicated that premature death most often results from acute and chronic medical conditions aggravated by homeless life rather than either mental illness or substance abuse5 .

PROGRAM AND POLICY ISSUES Many older homeless persons are entitled to Social Security benefits. However, these benefits often fail to cover the cost of housing. A person receiving Supplemental Security Income (SSI) cannot afford housing at the Free Market Rate (FMR) anywhere in the country. The National Low Income Housing Coalition considers housing affordable if it costs no more than 30% of a person’s income. For the District of Columbia, the monthly SSI payment for an individual is $637. If SSI represented an individual’s entire income, $181 would be an affordable rental price for housing. The FMR for a one-bedroom apartment in Washington D.C. is $1,134 (NLIHC, 2007). Even in West Virginia, the state with the smallest gap between FMR and rents affordable to SSI recipients, SSI recipients can afford less than half of the FMR on efficiency apartments6 . Even if the SSI grant does cover the rent in some states, only a few dollars remain for other expenses. Moreover, some homeless persons are unaware of their own eligibility for public assistance programs and face difficulties applying for and receiving benefits. Elderly homeless persons in particular often need help navigating the complex application process. To prevent elderly Americans from becoming homeless, we must provide enough low-income housing, income supports, and health care services to sustain independent living. For older adults who have already lost their homes, comprehensive outreach health and social services must become available, as well as access to existing public assistance programs. Finally, like all people who are homeless or at risk of homelessness, elderly people require adequate income, affordable housing, and affordable health care in order to stay securely housed.

Among this growing population of older adults living in poverty are people forced to grow old in the streets and in shelters, elderly persons who have recently become homeless or who remain at constant risk of losing housing. The number of elderly adults who have become homeless has increased around the county. An example of this increase has occurred in Massachusetts, where from 1999 to 2002, the number of people over 55 using shelters increased by 60%. Published by the National Coalition for the Homeless, September 2009.