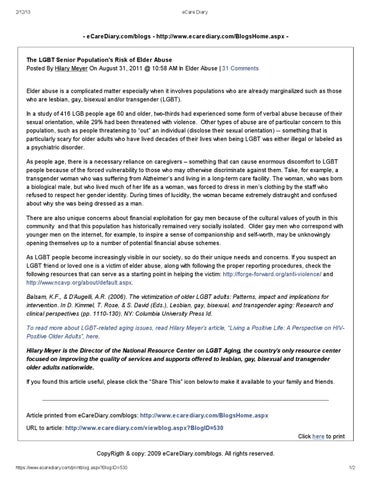 Elder abuse is a complicated matter especially when it involves populations who are already marginalized such as those who are lesbian, gay, bisexual and/or transgender (LGBT). In a study of 416 LGB people age 60 and older, two-thirds had experienced some form of verbal abuse because of their sexual orientation, while 29% had been threatened with violence. Other types of abuse are of particular concern to this population, such as people threatening to “out” an individual (disclose their sexual orientation) -- something that is particularly scary for older adults who have lived decades of their lives when being LGBT was either illegal or labeled as a psychiatric disorder. As people age, there is a necessary reliance on caregivers – something that can cause enormous discomfort to LGBT people because of the forced vulnerability to those who may otherwise discriminate against them. Take, for example, a transgender woman who was suffering from Alzheimer’s and living in a long-term care facility. The woman, who was born a biological male, but who lived much of her life as a woman, was forced to dress in men’s clothing by the staff who refused to respect her gender identity. During times of lucidity, the woman became extremely distraught and confused about why she was being dressed as a man. There are also unique concerns about financial exploitation for gay men because of the cultural values of youth in this community and that this population has historically remained very socially isolated. Older gay men who correspond with younger men on the internet, for example, to inspire a sense of companionship and self-worth, may be unknowingly opening themselves up to a number of potential financial abuse schemes. As LGBT people become increasingly visible in our society, so do their unique needs and concerns. If you suspect an LGBT friend or loved one is a victim of elder abuse, along with following the proper reporting procedures, check the following resources that can serve as a starting point in helping the victim: http://forge-forward.org/anti-violence/ and http://www.ncavp.org/about/default.aspx. Balsam, K.F., &amp; D’Augelli, A.R. (2006). The victimization of older LGBT adults: Patterns, impact and implications for intervention. In D. Kimmel, T. Rose, &amp; S. David (Eds.), Lesbian, gay, bisexual, and transgender aging: Research and clinical perspectives (pp. 1110-130). NY: Columbia University Press Id. To read more about LGBT-related aging issues, read Hilary Meyer’s article, “Living a Positive Life: A Perspective on HIVPositive Older Adults”, here. Hilary Meyer is the Director of the National Resource Center on LGBT Aging, the country&#39;s only resource center focused on improving the quality of services and supports offered to lesbian, gay, bisexual and transgender older adults nationwide. If you found this article useful, please click the “Share This” icon below to make it available to your family and friends.

This short article gives an overview of LGBT elder abuse issues. It originally appeared on eCareDiary.com.