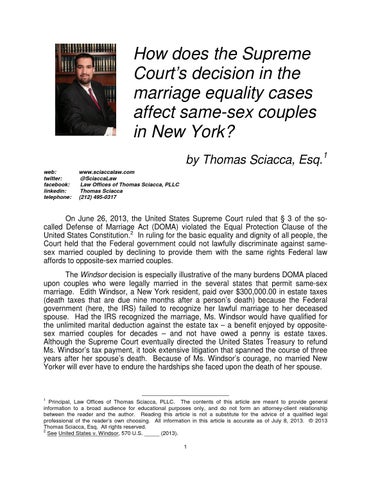 On June 26, 2013, the United States Supreme Court ruled that § 3 of the socalled Defense of Marriage Act (DOMA) violated the Equal Protection Clause of the United States Constitution. 2 In ruling for the basic equality and dignity of all people, the Court held that the Federal government could not lawfully discriminate against samesex married coupled by declining to provide them with the same rights Federal law affords to opposite-sex married couples. The Windsor decision is especially illustrative of the many burdens DOMA placed upon couples who were legally married in the several states that permit same-sex marriage. Edith Windsor, a New York resident, paid over $300,000.00 in estate taxes (death taxes that are due nine months after a person’s death) because the Federal government (here, the IRS) failed to recognize her lawful marriage to her deceased spouse. Had the IRS recognized the marriage, Ms. Windsor would have qualified for the unlimited marital deduction against the estate tax – a benefit enjoyed by oppositesex married couples for decades – and not have owed a penny is estate taxes. Although the Supreme Court eventually directed the United States Treasury to refund Ms. Windsor’s tax payment, it took extensive litigation that spanned the course of three years after her spouse’s death. Because of Ms. Windsor’s courage, no married New Yorker will ever have to endure the hardships she faced upon the death of her spouse.

Principal, Law Offices of Thomas Sciacca, PLLC. The contents of this article are meant to provide general information to a broad audience for educational purposes only, and do not form an attorney-client relationship between the reader and the author. Reading this article is not a substitute for the advice of a qualified legal professional of the reader’s own choosing. All information in this article is accurate as of July 8, 2013. © 2013 Thomas Sciacca, Esq. All rights reserved. 2 See United States v. Windsor, 570 U.S. _____ (2013). 1

One the same day, the Supreme Court ruled that the proponents of California’s discriminatory Proposition 8 measure lacked standing to appeal a California Federal Court’s determination that Proposition 8 violated the Federal constitution. 3 “Standing” refers to the legal right to take a position in litigation. Because they lacked standing, the Supreme Court ruled that neither it, nor the Federal Court of Appeals, had standing to reach the merits of the case. The end result is that all Californians may begin applying for marriage licenses, regardless of the gender or sex of their desired spouse. In reviewing the two recent decisions of the United States Supreme Court, one must be very careful not to jump to the wrong conclusions. Some examples: A. Unfortunately, DOMA is not dead (yet), although its days may be numbered. DOMA is a Federal statute that has several sections (§) to it. The ones that most directly impact the LGBT community are § 2 § 3. The Supreme Court did not invalidate the whole statute – only § 3 (allowing the Federal government to deny Federal benefits to same-sex spouses residing in states that protected their marriages). This was the issue squarely before the Court in Windsor. The Supreme Court did not rule on the constitutionality of § 2 (stating that the various states do not need to recognize the same-sex marriages performed in states that allow them). B. The Supreme Court did not overturn Proposition 8. Rather, the Court ruled that the proponents of the homophobic ballot initiative lacked the standing (legal authority) to defend it. The Federal District Court ruled Proposition 8 to be unconstitutional. When California’s governor and attorney general subsequently announced their unwillingness to defend Proposition 8, no party had any standing to continue the appellate process. Therefore, the Supreme Court did not reach the merits of the case. The Court did not rule that all of the various other states that affirmatively ban on same-sex marriage (currently 30+) violate the United States Constitution. Further, the Supreme Court did not rule that the freedoms contained in the United States Constitution require states to allow same-sex marriage. Thus, the Court’s ruling is very narrow, benefiting our brothers and sisters in California, but with no practical effect anywhere else. In light of the above, the reader should not become discouraged. The United States Supreme Court, like most courts, only considered the issues squarely before it. The other issues the Supreme Court failed to address here are all currently pending in other litigation, which may eventually reach the Supreme Court. Nonetheless, the Court’s recent decisions are certainly cause for celebration. However, the savvy reader may inquire – how does this decision affect the legal affairs of the legally-married LGBT New Yorker? To respond to that, I humbly offer five legal tips that should help start an informed conversation between you and your attorney, financial advisor, and tax preparer:

1. If you haven’t already done so, now is the time to consider getting married. Under the yoke of DOMA, LGBT married couples faced a level of discriminatory hurdles while interacting with the Federal government. New York State recognized their marriages and afforded them all available rights, while the Federal government regarded them differently. With the Supreme Court ruling § 3 of DOMA unconstitutional, many of the disparate treatment has fallen by the wayside. 2. Same-sex couples can now file joint Federal income tax returns. Here is something you never had before – a reason to get excited when filing your 1040! Since 2011, New York’s same-sex married couples could file a joint NYS income tax return, but not a joint Federal income tax return. Often, this resulted in couples preparing two sets of tax returns listing different marital status on each, with all the resulting frustration and cost. Effective immediately same-sex married couples can file a single return, or, if it is to their financial benefit, file as “married filing separately.” Couples should also review their previous Federal income tax returns (since their marriage) – it may be in their interest to file amended Federal income tax returns if it will result in a larger refund. Additionally, a surviving spouse may wish to file an amended Federal estate tax return if it will produce a refund. 3. Be wary when traveling or relocating to a state that does not recognize marriage equality. As mentioned above, the Supreme Court only invalided § 3 of DOMA, which regulates Federal recognition of valid same-sex marriages. It did not invalidate § 2, which allows states to not recognize your marriage, and, essentially, deny you with all of the rights of a married couple. Think twice before moving to a state that bans same-sex marriage, and, if you do, consult your attorney to make sure you have a Will, Power of Attorney, Health Care Proxy, and Living Will in place to protect your legal status. Sometimes, the lost civil liberties greatly outweigh the lower taxes or nicer weather. 4. Check beneficiaries on retirement accounts. A Federal law known as ERISA governs all retirement accounts, including most 401(k), 403(b), SEP, SIMPLE, and IRA programs. This law requires that your spouse inherit a minimum of half of the qualified retirement account, unless he or she consents to an alternate distribution by signing the beneficiary designation form before a Notary Public. Often, people choose to name non-spouse beneficiaries (younger relatives, charities, etc.) on these accounts because of the significant tax advantages offered by such a designation. If those are your wishes, make sure your spouse signs the consent. In the past, this was not necessary, as DOMA prevented the Federal government from recognizing all same-sex relationships. A simple check on the form will save hassle/aggravation later. 5. Review your Wills. In general, one should review his or her Will (and other estate planning documents) every 2-3 years. Under New York law, a subsequent marriage may automatically revoke some or all of an existing Will. In general, a 3

Will that lists an individual by name is more effective that lists an individual by relationship (such as “to my domestic partner” – especially if that person is now a spouse). Spend a few minutes reviewing these documents, and speak to your attorney about whether or not they still reflect your wishes fully. Now that samesex spouses can transfer assets between each other free of estate, gift, and generation-skipping transfer tax, now may also be a good time to review the tax planning in those documents to ensure you can take advantage of all available rules. Of course, these tips are not a substitute for a meeting with the appropriate professional, who can tailor his or her advice to your specific needs. And remember – now is a time to celebrate!

Thinking about getting married in New York now that part of DOMA has been overturned? Read through this article by Thomas Sciacca, Esq. for an overview of different considerations, including impacts on tax returns, traveling, retirement accounts and more. Thomas Sciacca is a principal at the Law Offices of Thomas Sciacca, PLLC. Find out more at www.sciaccalaw.com.