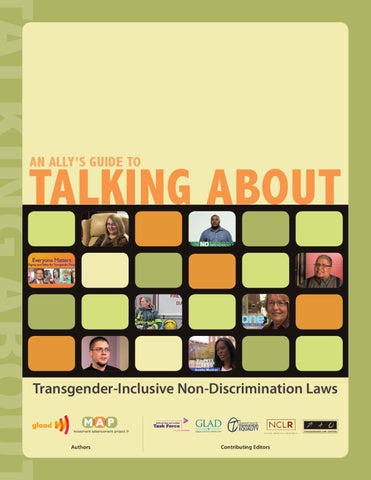 AN ALLY’S GUIDE TO TALKING ABOUT TRANSGENDER-INCLUSIVE NON-DISCRIMINATION LAWS Summary: Over the years, more and more cities and states have extended essential protections to LGBT people via non-discrimination laws. In response, antiLGBT activists have attacked these laws by attempting to incite “bathroom panic”—an irrational fear that nondiscrimination laws will compromise the safety of women and children in public restrooms. Because opponents’ false and misleading claims can initially confuse the strong and growing majorities who favor nondiscrimination protections, we need to do two things in response. First, we must remind people of the common, shared values that lead them to support non-discrimination laws in the first place—values like fairness and the idea that everyone should be treated equally. Second, we need to correct opponents’ falsehoods quickly and factually, without getting stuck debating specious claims that are designed to distract people away from their core values.

INTRODUCTION Over the decades, advocates for lesbian, gay, bisexual and transgender (LGBT) equality have been working to pass nondiscrimination laws and ordinances that protect transgender people, locally or statewide, against discrimination in housing, employment and public accommodations. These laws provide essential protections to transgender people, who often face widespread discrimination across many aspects of public life. Americans show strong public support for non-discrimination laws. In 2008, Gallup found that 89% of Americans support “equal rights in terms of job opportunities” for lesbians and gay men—a number that is basically unchanged since 2003.

A 2011 Harris Interactive survey for Out &amp; Equal Workplace Advocates found that 74% of Americans believe employees should be judged based on their job performance, not on whether they are transgender. And a 2011 Greenberg Quinlan Rosner survey for the Center for American Progress found that 73% of Americans favor protecting gay, lesbian and transgender people from employment discrimination. This broad support, which has grown over the years, has translated into increasing legislative progress. As detailed later, 16 states,1 the District of Columbia, and more than 125 cities and counties have included transgender people under their non-discrimination laws.

NON-DISCRIMINATION &amp; THE VALUES OF FAIRNESS &amp; EQUALITY The principle of non-discrimination is rooted in core American values like fairness, equality and opportunity. The vast majority of Americans share these core values at the center of non-discrimination ordinances. This is the reason why these ordinances have such high support from the start. Supporters should emphasize what the ordinance is fundamentally about, and the beliefs that the ordinance supports. Fundamentally, supporters of non-discrimination laws believe that: “All residents should be treated fairly and equally by the laws of our city (or state).” This simple reminder presents a clear statement of the core values—fairness, equality, equal treatment for everyone—that underlie support for any kind of non-discrimination principle or law. It reinforces supporters’ deeply held values in the midst of messages by anti-LGBT activists. 1

•• “All residents should be treated fairly and equally by the laws of our city (or state).”

2. Clarify that opponents’ claims simply are not rooted in fact.

•• “More than 100 cities across America have already passed similar non-discrimination laws—and implemented them successfully. Those cities simply did not experience the terrible things that opponents of this bill claimed would happen.”

•• “All hardworking people in our city, including transgender people, should have the chance to earn a living and provide for themselves and their families. Nobody should have to live in fear that they can be legally fired for reasons that have nothing to do with their job performance.”

NOTE: We strongly recommend using the exact wording quoted above in talking about inclusive non-discrimination laws.

ANTI-LGBT ACTIVISTS TRY TO INCITE PANIC ABOUT BATHROOMS As the number of cities and states with inclusive nondiscrimination laws has grown, anti-LGBT activists have begun to attack and challenge these protections. Of course, they know that most Americans support non-discrimination

laws—and that directly attacking such laws would fail from the start. So opponents instead try to create a strategy of fear and distraction. How? Their attacks claim that inclusive non-discrimination laws would allow men to enter women’s restrooms and locker rooms—and that this would be exploited by sexual predators. This incitement to what we call “bathroom panic” combines people’s existing discomfort and anxiety about public bathrooms with ongoing fears that people, especially parents, have about the safety of their children in the modern age. To further this fear-based message, antiLGBT opponents have created TV commercials and launched Web sites with names like NotMyShower.net (Montgomery County, Maryland), NoBathroomBill.com (Massachusetts) and NotMyBathroom.com (Missoula, Montana).

SUPPORTING FAIRNESS &amp; EQUALITY AMID ANTI-LGBT ACTIVISTS’ ATTEMPTS TO INCITE FEAR Since 2009, attacks by anti-LGBT activists have failed each time they have been used in a ballot campaign. For example, in March 2009, Gainesville voters retained that city’s non-discrimination law by a margin of 58% to 42%, amid aggressive opponent messaging around bathrooms. And in November 2009, Kalamazoo, Michigan, voters overwhelming approved—by 62% to 38%—their own LGBT-inclusive non-discrimination ordinance, again against a backdrop of an aggressive “bathroom panic” campaign.

However, because anti-LGBT activists attempt to create fear and confusion, supporters of non-discrimination ordinances need to reach out and provide a steadying hand on the shoulder of those who support fairness and equality. This means reminding other supporters of their values, and, if necessary, addressing their concerns quickly and factually— and then moving back to an emphasis on our shared values.

Opponents’ Claims Simply Are Not Rooted in Fact Americans believe in fairness and equality, and they inherently want to support non-discrimination laws. But should they be concerned about the claims of anti-LGBT activists? In a word: No. “More than 100 cities across America have already passed similar non-discrimination laws—and implemented them successfully. Those cities simply did not experience the terrible things that opponents of this bill claimed would happen.” This important reminder helps unmask both the false nature of opponents’ claims and the fears that they are trying to create. It allows people to apply reason, not fear, to the questions being raised – and once they have replaced fear with reason, they can once again make decisions based on their core values. Calling attention to the fact that more than 100 cities have implemented transgender-inclusive non-discrimination laws is important for another reason as well: it reminds people that there is strong precedent for these laws. As of 2011, 16 states and the District of Columbia have passed laws protecting transgender people from discrimination. Additionally, more than 125 cities and counties protect transgender people under their non-discrimination laws. These include large cities (like Los Angeles, Seattle, San Francisco, Atlanta, Dallas, Boston, Philadelphia, Baltimore, Denver, and New York City); smaller communities (like Shaker Heights, OH; Charleston, WV; Evanston, IL; University City, MO; and Covington, KY); and counties (like Johnson County, IA; and Erie County, PA). A complete list of states, counties and cities with inclusive non-discrimination laws is available at the following URL: http://thetaskforce.org/repor ts_and_research/all_ jurisdictions.

Despite these strong precedents across the nation, opponents’ messages can mislead people into believing that this is the first time that these laws have ever been considered. A simple reminder that these laws are commonplace, and that they have been implemented successfully all over America, can lay this misperception to rest. However, while countering opponents’ inaccurate “bathroom panic” claims is important, such discussions do not help people remember why they should support a non-discrimination ordinance. If you need to counter opponents’ false claims, do so quickly by pointing to successful laws nationwide. Then move back to the values messages that affirm and build people’s support for non-discrimination protections.

CONCLUSION Non-discrimination ordinances and laws provide critical protections for LGBT people in employment, housing and public accommodations. They have been successfully implemented in states and communities across the nation. And they are rooted in our core values: fairness and equality; the principle that all hardworking people—including transgender people—should have the chance to earn a living and provide for themselves and their families; and the belief that no one should have to live in daily fear that they could be unfairly fired from their job for reasons that have nothing to do with their job performance. This is why strong majorities of Americans believe that when it comes to employment, housing and public accommodations, everyone should be treated fairly and equally. It’s why so many states, cities and counties have passed non-discrimination laws. Opponents of these laws may try to incite false fears, but experience has shown these fears to be exactly that: false. So, allay fears quickly if needed, but keep conversations rooted in the shared values of fairness and equality that form the foundation of support for non-discrimination laws.

For More Information Please contact MAP (talkingabout@lgbtmap.org) or GLAAD (talkingaboutseries@glaad.org) if you have any questions or would like additional assistance.

This short booklet gives the reader talking points when faced with conversations that cite falsehoods or misinformation about transgender inclusion (such as "bathroom panic"). It also highlights non-discrimination policies and ultimately summarizes why transgender people should be protected with regard to employment, housing, and public accommodations.