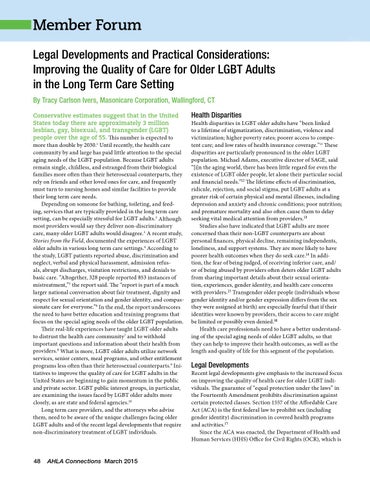 Member Forum Legal Developments and Practical Considerations: Improving the Quality of Care for Older LGBT Adults in the Long Term Care Setting By Tracy Carlson Ivers, Masonicare Corporation, Wallingford, CT Conservative estimates suggest that in the United States today there are approximately 3 million lesbian, gay, bisexual, and transgender (LGBT) people over the age of 55. This number is expected to more than double by 2030.1 Until recently, the health care community by and large has paid little attention to the special aging needs of the LGBT population. Because LGBT adults remain single, childless, and estranged from their biological families more often than their heterosexual counterparts, they rely on friends and other loved ones for care, and frequently must turn to nursing homes and similar facilities to provide their long term care needs. Depending on someone for bathing, toileting, and feeding, services that are typically provided in the long term care setting, can be especially stressful for LGBT adults.2 Although most providers would say they deliver non-discriminatory care, many older LGBT adults would disagree.3 A recent study, Stories from the Field, documented the experiences of LGBT older adults in various long term care settings.4 According to the study, LGBT patients reported abuse, discrimination and neglect, verbal and physical harassment, admission refusals, abrupt discharges, visitation restrictions, and denials to basic care. “Altogether, 328 people reported 853 instances of mistreatment,”5 the report said. The “report is part of a much larger national conversation about fair treatment, dignity and respect for sexual orientation and gender identity, and compassionate care for everyone.”6 In the end, the report underscores the need to have better education and training programs that focus on the special aging needs of the older LGBT population. Their real-life experiences have taught LGBT older adults to distrust the health care community7 and to withhold important questions and information about their health from providers.8 What is more, LGBT older adults utilize network services, senior centers, meal programs, and other entitlement programs less often than their heterosexual counterparts.9 Initiatives to improve the quality of care for LGBT adults in the United States are beginning to gain momentum in the public and private sector. LGBT public interest groups, in particular, are examining the issues faced by LGBT older adults more closely, as are state and federal agencies.10 Long term care providers, and the attorneys who advise them, need to be aware of the unique challenges facing older LGBT adults and of the recent legal developments that require non-discriminatory treatment of LGBT individuals.

Health Disparities Health disparities in LGBT older adults have “been linked to a lifetime of stigmatization, discrimination, violence and victimization; higher poverty rates; poorer access to competent care; and low rates of health insurance coverage.”11 These disparities are particularly pronounced in the older LGBT population. Michael Adams, executive director of SAGE, said “[i]n the aging world, there has been little regard for even the existence of LGBT older people, let alone their particular social and financial needs.”12 The lifetime effects of discrimination, ridicule, rejection, and social stigma, put LGBT adults at a greater risk of certain physical and mental illnesses, including depression and anxiety and chronic conditions; poor nutrition; and premature mortality and also often cause them to delay seeking vital medical attention from providers.13 Studies also have indicated that LGBT adults are more concerned than their non-LGBT counterparts are about personal finances, physical decline, remaining independents, loneliness, and support systems. They are more likely to have poorer health outcomes when they do seek care.14 In addition, the fear of being judged, of receiving inferior care, and/ or of being abused by providers often deters older LGBT adults from sharing important details about their sexual orientation, experiences, gender identity, and health care concerns with providers.15 Transgender older people (individuals whose gender identity and/or gender expression differs from the sex they were assigned at birth) are especially fearful that if their identities were known by providers, their access to care might be limited or possibly even denied.16 Health care professionals need to have a better understanding of the special aging needs of older LGBT adults, so that they can help to improve their health outcomes, as well as the length and quality of life for this segment of the population.

Legal Developments Recent legal developments give emphasis to the increased focus on improving the quality of health care for older LGBT individuals. The guarantee of “equal protection under the laws” in the Fourteenth Amendment prohibits discrimination against certain protected classes. Section 1557 of the Affordable Care Act (ACA) is the first federal law to prohibit sex (including gender identity) discrimination in covered health programs and activities.17 Since the ACA was enacted, the Department of Health and Human Services (HHS) Office for Civil Rights (OCR), which is

charged with enforcing Section 1557,18 has been accepting and investigating complaints under this provision.19 OCR anticipates publishing a Notice of Proposed Rulemaking implementing Section 1557 in the spring of 2015.20 Another important development affecting the delivery of health care to LGBT individuals in the United States is the 2013 Supreme Court ruling in United States v. Windsor.21 The Windsor ruling struck down Section 3 of the Defense of Marriage Act of 1996 (DOMA), which prevented same-sex married couples from being recognized as “spouses” for federal purposes. The Supreme Court decision in Windsor gave same-sex married couple’s access to the tangible benefits of the federal safety net, as well as more robust personal and familial protections under federal law.22 Although Windsor is limited to the federal sphere, the U.S. Supreme Court announced on January 15 that it will hear oral arguments later this year on the question of whether the constitutional guarantee of equal protection under the Fourteenth Amendment gives gay and lesbian Americans the right to marry, notwithstanding the laws of their state. On the heels of Windsor, the Centers for Medicare &amp; Medicaid Services (CMS) issued guidance in August 2013 specifying that same-sex married couples enrolled in Medicare Advantage plans are entitled to coverage of care in the same skilled nursing facility in which their spouse resides to the same extent that such coverage is provided to opposite-sex couples.23 The agency said the guarantee of coverage applies equally to couples who are in a legally recognized same-sex marriage, regardless of where they live.24 OCR published in September 2014 guidance to help covered entities understand how their Health Insurance Portability and Accountability Act (HIPAA) Privacy Rule obligations could be impacted by the Supreme Court ruling. OCR clarified the terms “spouse,” “marriage,” and “family member” within the context of the HIPAA Privacy Rule.25 According to the guidance, the term “spouse” includes individuals in a legally valid same-sex marriage sanctioned by a state, territory, or foreign jurisdiction; “marriage” includes both same-sex and opposite-sex marriages; and “family members” include the dependents of those marriages.26 These terms apply to individuals who were legally married in jurisdictions that recognized same-sex marriages, regardless of the rules of the state in which they currently reside. OCR intends to issue additional clarification under the Privacy Rule later this year. In an effort to further ensure that Medicare and Medicaid policies are consistent with both the Windsor ruling and with HHS policies on same-sex marriages, CMS issued a proposed rule 27 in December 2014, revising regulations governing certain selected conditions of participation for providers, conditions for coverage for suppliers, and requirements for long term care facilities.28 According to CMS, the proposed rule clarifies “that where state law or facility policy provides or allows certain rights or privileges to a patient’s opposite-sex spouse under certain provisions, a patient’s same-sex spouse must be afforded equal treatment if the marriage is valid in the

Health care professionals need to have a better understanding of the special aging needs of older LGBT adults, so that they can help to improve their health outcomes, as well as the length and quality of life for this segment of the population.

jurisdiction in which it was celebrated,” known as the celebration rule.29 The comment period for the proposed rule closed February 10, 2015. Most recently, CMS issued an agency ruling applying the “celebration rule” to certain entitlement, eligibility, and enrollment provisions in Medicare. The agency issued the binding ruling February 9, 2015, which is effective for appeals pending on, initiated, or reopened after February 9 for entitlement and enrollment determinations made on or after June 26, 2013.30 Long term care providers also should be aware of the Federal Nursing Home Reform Act of 1987 (FNHRA), which protects the rights of LGBT adults residing in nursing homes.31 FNHRA applies to all nursing facilities that accept Medicare and/or Medicaid funding. The Act requires nursing homes to treat all patients with dignity, respect, and consideration and grants all residents the right to self-determination. These rights, commonly referred to as the patients’ bill of rights, protect LGBT residents from discrimination and harassment, regardless of their sexual orientation or gender identity or expression.32 FNHRA also contains non-discriminatory visitation provisions. Health care attorneys should review applicable conditions of participation and the individual civil liberty laws of their state for additional discrimination protections that may impact their long term care clients. Because there are no federal standards governing assisted-living facilities in the United States, attorneys also should reference their state regulations and licensing requirements. Finally, to ensure that adequate protections are in place for older LGTB individuals, long term care facilities and their attorneys should always encourage older LGBT adults to execute wills, medical and financial powers of attorney, health care proxies, and advanced directives.

Member Forum Health care attorneys should stress the importance of LGBT-specific training programs with their long term care clients and encourage them to review and revise facility policies to ensure compliance with antidiscrimination laws.

Conclusion Providers need to be properly trained to understand the unique health, psychological, social, and economic needs of their LGBT patients.33 Proper education and training programs will improve patient-provider communications and ultimately result in better health care outcomes for the older LGBT population.34 Health care attorneys should stress the importance of LGBT-specific training programs with their long term care clients and encourage them to review and revise facility policies to ensure compliance with anti-discrimination laws. Health law attorneys who are aware of and understand the current legal and regulatory trends affecting LGBT older adults will be better positioned to protect their clients and ultimately help to improve the quality of care older LGBT adults receive in this country.

About the Author Tracy Carlson Ivers, JD, CHC, CPC (Tivers@Masonicare.org) is the Legal and Compliance Analyst for Masonicare Corporation in Wallingford, CT. Connect with Tracy via LinkedIn and on Twitter @TracyIvers.

This article from AHLA (American Health Lawyers Association) Magazine details a number of new legal developments that concern LGBT older adults in long term care settings. It sets out new precedents and concludes that health care attorneys should stress the importance of LGBT-specific training programs with their long term care clients and encourage them to review and revise facility policies to ensure compliance with anti-discrimination laws.