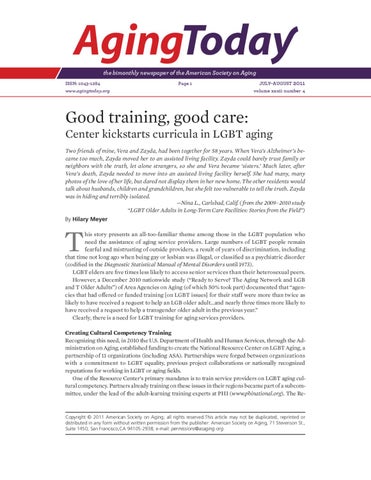 Good training, good care: Center kickstarts curricula in LGBT aging Two friends of mine, Vera and Zayda, had been together for 58 years. When Vera’s Alzheimer’s became too much, Zayda moved her to an assisted living facility. Zayda could barely trust family or neighbors with the truth, let alone strangers, so she and Vera became ‘sisters.’ Much later, after Vera’s death, Zayda needed to move into an assisted living facility herself. She had many, many photos of the love of her life, but dared not display them in her new home. The other residents would talk about husbands, children and grandchildren, but she felt too vulnerable to tell the truth. Zayda was in hiding and terribly isolated. —Nina L., Carlsbad, Calif. ( from the 2009−2010 study “LGBT Older Adults in Long-Term Care Facilities: Stories from the Field”) By Hilary Meyer

his story presents an all-too-familiar theme among those in the LGBT population who need the assistance of aging service providers. Large numbers of LGBT people remain fearful and mistrusting of outside providers, a result of years of discrimination, including that time not long ago when being gay or lesbian was illegal, or classified as a psychiatric disorder (codified in the Diagnostic Statistical Manual of Mental Disorders until 1973). LGBT elders are five times less likely to access senior services than their heterosexual peers. However, a December 2010 nationwide study (“Ready to Serve? The Aging Network and LGB and T Older Adults”) of Area Agencies on Aging (of which 50% took part) documented that “agencies that had offered or funded training [on LGBT issues] for their staff were more than twice as likely to have received a request to help an LGB older adult…and nearly three times more likely to have received a request to help a transgender older adult in the previous year.” Clearly, there is a need for LGBT training for aging services providers. Creating Cultural Competency Training Recognizing this need, in 2010 the U.S. Department of Health and Human Services, through the Administration on Aging, established funding to create the National Resource Center on LGBT Aging, a partnership of 11 organizations (including ASA). Partnerships were forged between organizations with a commitment to LGBT equality, previous project collaborations or nationally recognized reputations for working in LGBT or aging fields. One of the Resource Center’s primary mandates is to train service providers on LGBT aging cultural competency. Partners already training on these issues in their regions became part of a subcommittee, under the lead of the adult-learning training experts at PHI (www.phinational.org). The Re-

source Center created comprehensive, standardized curricula to train aging services agencies on how to create an inclusive, safe and welcoming environment for LGBT older adults. The Resource Center also offers a separate training for LGBT organizations on aging cultural competency. What’s in a Training? The trainings have begun, and Resource Center trainers are ready to come to any agency that wants them. Requests have been coming in at a rapid rate. The trainings cover the culture, needs and concerns of LGBT older adults; LGBT elders’ reluctance to access health and social services; best practices and policies for increasing inclusiveness and safety for LGBT older adults; tools and education to better serve LGBT elders; health disparities between LGBT elders and others; judgments, assumptions, myths and misinformation about HIV and AIDS; and finally, how to recognize that individuals are entitled to diverse opinions and beliefs, and that their actions and behaviors must be consistent with workplace expectations in relation to inclusion and safety for LGBT constituents. The trainings also address the challenge of encouraging fellow residents or service recipients to create inclusive environments, relying heavily on role-playing, case scenarios, small group work and other types of interactive learning. For example, trainees might be asked to role-play in pre-prepared scenarios of times when homophobia, racism or trans-phobia arise in a long-term-care facility. And there is an evaluation process developed by researchers at Hunter College to understand and document how and what knowledge and skills participants acquire. Pre- and post-training forms measure whether the training effectively accomplishes the learning objectives. The Resource Center’s training initiative has been underway since this past March, and agencies that are interested in receiving trainings can request them through the website: www.lgbtagingcenter. org. There are several other LGBT-aging training curricula in use across the country, including trainings by all of the organizations that helped to create the Resource Center curricula: CenterLink, FORGE Transgender Aging Network, GRIOT Circle, The LGBT Aging Project and Openhouse. There are also LGBT aging trainings by Training to Serve, Project Visibility, CJE SeniorLife, and Gay and Grey. With so many trainings happening across the country, a number of which occur through the National Resource Center on LGBT Aging’s collaboratively developed curricula, the goal is that stories like Vera and Zayda’s will become a thing of the past, and that all LGBT older adults can access senior services with full confidence that they will be treated with dignity and respect. n Hilary Meyer is director of the National Resource Center on LGBT Aging in New York.

Article from Hilary Meyer, Director of the National Resource Center on LGBT Aging, about the importance of LGBT cultural competency trainings.