A timetable round up of recent LGBT research 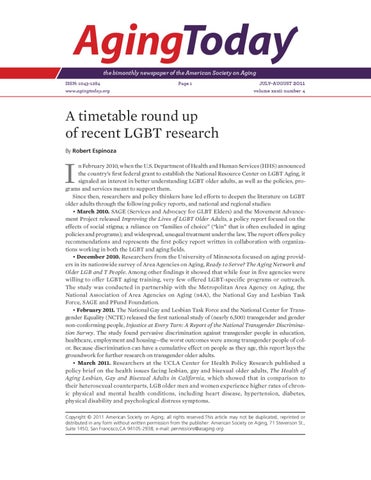 A timetable round up of recent LGBT research By Robert Espinoza

n February 2010, when the U.S. Department of Health and Human Services (HHS) announced the country’s first federal grant to establish the National Resource Center on LGBT Aging, it signaled an interest in better understanding LGBT older adults, as well as the policies, programs and services meant to support them. Since then, researchers and policy thinkers have led efforts to deepen the literature on LGBT older adults through the following policy reports, and national and regional studies: • March 2010. SAGE (Services and Advocacy for GLBT Elders) and the Movement Advancement Project released Improving the Lives of LGBT Older Adults, a policy report focused on the effects of social stigma; a reliance on “families of choice” (“kin” that is often excluded in aging policies and programs); and widespread, unequal treatment under the law. The report offers policy recommendations and represents the first policy report written in collaboration with organizations working in both the LGBT and aging fields. • December 2010. Researchers from the University of Minnesota focused on aging providers in its nationwide survey of Area Agencies on Aging, Ready to Serve? The Aging Network and Older LGB and T People. Among other findings it showed that while four in five agencies were willing to offer LGBT aging training, very few offered LGBT-specific programs or outreach. The study was conducted in partnership with the Metropolitan Area Agency on Aging, the National Association of Area Agencies on Aging (n4A), the National Gay and Lesbian Task Force, SAGE and PFund Foundation. • February 2011. The National Gay and Lesbian Task Force and the National Center for Transgender Equality (NCTE) released the first national study of (nearly 6,500) transgender and gender non-conforming people, Injustice at Every Turn: A Report of the National Transgender Discrimination Survey. The study found pervasive discrimination against transgender people in education, healthcare, employment and housing—the worst outcomes were among transgender people of color. Because discrimination can have a cumulative effect on people as they age, this report lays the groundwork for further research on transgender older adults. • March 2011. Researchers at the UCLA Center for Health Policy Research published a policy brief on the health issues facing lesbian, gay and bisexual older adults, The Health of Aging Lesbian, Gay and Bisexual Adults in California, which showed that in comparison to their heterosexual counterparts, LGB older men and women experience higher rates of chronic physical and mental health conditions, including heart disease, hypertension, diabetes, physical disability and psychological distress symptoms.

In the same month, the Institute of Medicine issued The Health of Lesbian, Gay, Bisexual and Transgender People: Building a Foundation for Better Understanding. Conducted across 18 months— through public meetings, an extensive literature review and with the guidance of 15 expert reviewers—the report found that LGBT health research is either lacking or underdeveloped in most areas. The report also noted that few studies exist on LGBT elders, with even fewer on transgender elders, bisexual elders and LGBT elders ages 85 and older. • April 2011. The National Senior Citizens Law Center, in collaboration with Lambda Legal, the National Center for Lesbian Rights, NCTE, the National Gay and Lesbian Task Force and SAGE issued LGBT Older Adults in Long-Term Care Facilities: Stories from the Field, which collected hundreds of stories nationwide. It demonstrated that many LGBT older adults experience regular discrimination in long-term-care facilities. • To be released. Researchers from the University of Washington, led by Karen FredricksenGoldsen, have published preliminary findings of a national study on the health of LGBT older adults, funded by the National Institutes of Health and the National Institute on Aging. Scheduled for release later this year, The Health Report: Resilience and Disparities among Lesbian, Gay, Bisexual and Transgender Older Adults draws on responses from more than 2,500 LGBT older adults. See Goldsen’s story on its findings on page 8. n Robert Espinoza is senior director of Policy and Communications at SAGE (Services and Advocacy for GLBT Elders).

A timetable round up of recent LGBT research

A good recap of the latest LGBT research in the U.S. over the past 2 years.