How to Age with HIV - Gracefully 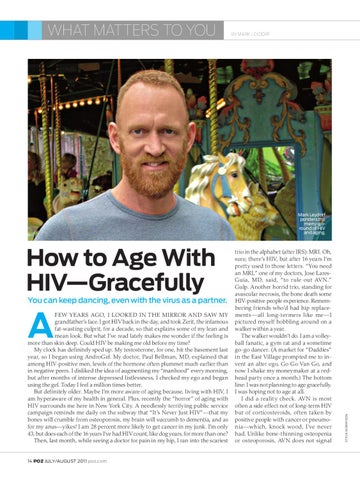 WHAT MATTERS TO YOU

How to Age With HIV—Gracefully

You can keep dancing, even with the virus as a partner.

FEW YEARS AGO, I LOOKED IN THE MIRROR AND SAW MY grandfather’s face. I got HIV back in the day, and took Zerit, the infamous fat-wasting culprit, for a decade, so that explains some of my lean and mean look. But what I’ve read lately makes me wonder if the feeling is more than skin deep. Could HIV be making me old before my time? My clock has definitely sped up. My testosterone, for one, hit the basement last year, so I began using AndroGel. My doctor, Paul Bellman, MD, explained that among HIV-positive men, levels of the hormone often plummet much earlier than in negative peers. I disliked the idea of augmenting my “manhood” every morning, but after months of intense depressed listlessness, I checked my ego and began using the gel. Today I feel a million times better. But definitely older. Maybe I’m more aware of aging because, living with HIV, I am hyperaware of my health in general. Plus, recently the “horror” of aging with HIV surrounds me here in New York City. A needlessly terrifying public service campaign reminds me daily on the subway that “It’s Never Just HIV”—that my bones will crumble from osteoporosis, my brain will succumb to dementia, and as for my anus—yikes! I am 28 percent more likely to get cancer in my junk. I’m only 43, but does each of the 16 years I’ve had HIV count, like dog years, for more than one? Then, last month, while seeing a doctor for pain in my hip, I ran into the scariest

trio in the alphabet (after IRS): MRI. Oh, sure, there’s HIV, but after 16 years I’m pretty used to those letters. “You need an MRI,” one of my doctors, Jose LaresGuia, MD, said, “to rule out AVN.” Gulp. Another horrid trio, standing for avascular necrosis, the bone death some HIV-positive people experience. Remembering friends who’d had hip replacements—all long-termers like me—I pictured myself hobbling around on a walker within a year. The walker wouldn’t do. I am a volleyball fanatic, a gym rat and a sometime go-go dancer. (A market for “Daddies” in the East Village prompted me to invent an alter ego, Go Go Van Go, and now I shake my moneymaker at a redhead party once a month.) The bottom line: I was not planning to age gracefully. I was hoping not to age at all. I did a reality check. AVN is most often a side effect not of long-term HIV but of corticosteroids, often taken by positive people with cancer or pneumonia—which, knock wood, I’ve never had. Unlike bone-thinning osteopenia or osteoporosis, AVN does not signal

aging. (My first bone-density scan, last year, showed minimal loss. If it gets worse, I’ll swap out the HIV med, Viread/ tenofovir, thought to cause it.) But I didn’t have AVN anyway. The MRI showed, instead, garden-variety tendinosis, a sort of chronic tendinitis— caused, most likely, by all that volleyball and go-go dancing. Still, I wonder: Is HIV turning me from a daddy to a granddaddy, even before I hit 50? Researchers have long suspected that HIV does in fact speed aging. Bellman is convinced that inflammation— the wear and tear of a perpetually activated immune system—is responsible, and research has been confirming that. But it’s complicated. “There is a strong overlap between HIV and some physiological processes we associate with aging,” Bellman says. “It is hard to [determine] the relevant factors,” he says, enumerating a list that includes ”HIV infection before and after treatment, drug toxicity—which has lessened considerably with safer and more effective medications—and lifestyle factors.” He believes the key to preserving my sweet youthfulness is vigilance: regular screenings and scans. My long-ago Zerit fits the category of drug toxicity. Whatever it might have done to my innards, I took care to fix my outers. Looking older made me feel older. So I consulted New York dermatologist Jeffrey Roth, MD. He prefers long-lasting but non-permanent fillers like Sculptra and Radiesse to silicone. “The primary goal of correcting lipodystrophy is to restore a normal look to the face,” Roth says, “and what is normal changes as a patient ages.” It made sense to me then, and still does after a few touch-ups. What to do? Keep living, and accept, as Roth says, “normal changes.” Why fear aging—hell, 16 years ago, the idea that I wouldn’t get older was what terrified me! I’ll age more gracefully with HIV if I focus more on what I can do (including screenings and scans) and less on what might be coming to do me in. LaresGuia says I need to take a few months’ break from volleyball. If I’m going to keep bumping and grinding, I need to take better care of my bumper. ■

HOW TO: Have Lifelong Health

Symptoms of aging—often associated with metabolic and inflammatory problems—are poorly recognized and treated even in people who don’t have HIV, Paul Bellman, MD, says. But by proactively diagnosing, treating and preventing these problems, he advises, “HIV-positive patients can have an excellent chance of aging gracefully and healthfully.” Follow these tips:

“You need a social network that will sustain you as you grow older,” says John Genke, LCSW-R, a senior social worker at Services &amp; Advocacy for Gay, Lesbian, Bisexual &amp; Transgender Elders (SAGE) in New York City. “Many LGBT older people retreat into isolation as a protection, but this often increases the problem because they feel lonely and abandoned. It’s really important to find sources of community and connection.” For those of us living (and aging) with HIV, support groups like those offered by SAGE can be invaluable at providing a sense of community. “The biggest change I see in the HIV support groups I facilitate,” Genke says, “is the difference it makes in the members’ lives as they meet new people, break their isolation and learn how to cope with being long-term HIV survivors.” Most AIDS service organizations offer special support groups for older people with HIV. To find one near you, search directory.poz.com. If you don’t locate a group that suits you, ask your doctor or clinic for a reference—or start one yourself. The Health and Welfare Ministries of Global Ministries, United Methodist Church, offers an online guide at gbgm-umc .org/health/hivfocus/focus023.cfm.

POP THOSE PILLS In studies of long-term life with HIV, keeping the virus suppressed and CD4 cell counts above 500 correlates to a longer, healthy life. No great mystery— a functioning immune system is your first defense against life’s slings and arrows. (Treat any coinfections too— hepatitis, herpes and others.) EAT WISER Metabolic syndrome, the accumulation of fat around the middle, is a problem for all Americans, but especially for folks living with HIV, who are at increased risk for heart and liver disease. Aim for well-balanced meals with lean protein and plenty of colorful veggies. MOVE IT OR LOSE IT Exercise keeps your heart pumping, your muscles limber and your bones strong. It even freshens your skin and lifts your mood. And research suggests that sitting for long stretches at a time can accelerate the process of fat accumulation—even if you work out like a maniac later. CHOOSE CLEAN LIVING Sad to say, people with HIV are more likely than the general population to smoke tobacco, use recreational drugs and drink too much. Whatever the cause—stress? depression?—seek help if you can’t kick these killer habits, all of which raise your risk for cancer, heart disease and other conditions. For help with smoking cessation, search “Smoking: Commit to Quit” (with quotation marks) on poz.com.

Scientists are working on new and existing drugs that can slow metabolic changes and curb inflammation. Egrifta (tesamorelin), the recently approved gut-buster, is one drug that seems to do both. Others, such as drugs already approved to treat malaria and cholesterol, are showing results in early testing to quiet HIV inflammation. For updates on this research and related lessons and tips, search “HIV and Aging” (with quotation marks) on poz.com.

How to Age with HIV - Gracefully

A personal story, published in POZ Magazine, about the aging process with HIV.