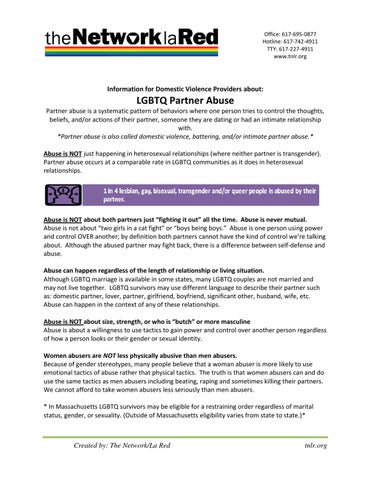 Information for Domestic Violence Providers about:

Abuse is NOT about both partners just “fighting it out” all the time. Abuse is never mutual. Abuse is not about “two girls in a cat fight” or “boys being boys.” Abuse is one person using power and control OVER another; by definition both partners cannot have the kind of control we’re talking about. Although the abused partner may fight back, there is a difference between self-defense and abuse. Abuse can happen regardless of the length of relationship or living situation. Although LGBTQ marriage is available in some states, many LGBTQ couples are not married and may not live together. LGBTQ survivors may use different language to describe their partner such as: domestic partner, lover, partner, girlfriend, boyfriend, significant other, husband, wife, etc. Abuse can happen in the context of any of these relationships. Abuse is NOT about size, strength, or who is “butch” or more masculine Abuse is about a willingness to use tactics to gain power and control over another person regardless of how a person looks or their gender or sexual identity. Women abusers are NOT less physically abusive than men abusers. Because of gender stereotypes, many people believe that a woman abuser is more likely to use emotional tactics of abuse rather that physical tactics. The truth is that women abusers can and do use the same tactics as men abusers including beating, raping and sometimes killing their partners. We cannot afford to take women abusers less seriously than men abusers. * In Massachusetts LGBTQ survivors may be eligible for a restraining order regardless of marital status, gender, or sexuality. (Outside of Massachusetts eligibility varies from state to state.)*

Examples of tactics of abuse relevant to LGBTQ communities In addition to the tactics of abuse that are commonly used by abusers in all relationships, there are some additional tactics that abusers can use when one or more person in the relationship is LGBTQ identified. They may include the following: Emotional abuse Questioning the validity of the survivor’s gender identity or sexual orientation; isolation from LGBTQ community groups or social spaces; controlling what someone wears or how they express their gender or sexuality; name calling using homo/bi/transphobic slurs; pressuring partner to be out; blaming for being “too” out; defining reality i.e. “Now that you are _______ (gay, queer, transgender, etc), you can’t do this,” or “If you want to be really ________ (gay, queer, transgender, etc.), you have to do this;” using stereotypes about LGBT relationships to control partner i.e. “now that you are with a woman, you can’t have any women friends or look at other women.” Physical abuse Withholding hormones needed for gender transition; stalking, which can be easier if the partner is the same gender because they can make calls pretending to be the survivor or access services that are gender-specific; refusing to let partner rest or heal from gender transition-related surgeries; public displays of affection in areas that are not LGBTQ friendly to intimidate or scare partner. Note: physical abuse in LGBTQ relationships can be just as severe as in straight relationships including tactics such as: pushing; hitting; punching; strangulation; threatening or attempting suicide; hurting pets; taking mobility aides or prosthetics; restricting medical access; controlling food; locking in or out of the house; murder; etc. A common myth is that women cannot be as violent as men, yet this is untrue. Sexual abuse Not respecting words used to describe parts of their partner’s body or body boundaries; exposure to HIV or sexually transmitted infections; using stereotypes to define reality around sex, i.e. “all _______(lesbians, queers, gays, etc.) have sex this way;” using gender roles to control what partner does sexually, i.e. “Real _______ (men, women, butches, femmes) do this;” forcing partner to have sex in a way that doesn’t align with their gender identity; Using the myth that women cannot rape other women, or that men cannot be raped to deny or discount sexual assault. Note: sexual abuse in LGBTQ relationships can be just as severe as in straight relationships including tactics such as: rape, forcing sex acts; forcing sex in exchange for housing, food, money; sexual harassment; forcing sex with other people; forcing monogamy or forcing polyamory; withholding sex in order to control the partner; etc. LGBTQ survivors may deal with the added shame of being

the target of sexual violence from someone in their community; a community they believed was safe. They may also discount or minimize the sexual abuse they experienced because of stereotypes that women cannot be rapists and that men cannot be raped. Economic abuse Getting someone fired from their job, which can be easier if the partner is of the same gender and calls impersonating the survivor to say “I quit;” identity theft, which can be easier if the partner is the same gender; using economic status to determine roles in a relationship; threatening to out partner to employer; threatening to out partner to parents or relatives (if they are paying for tuition, housing, utilities, or including them in an inheritance). Cultural/identity abuse Threat of outing partner’s sexual orientation, gender identity, S/M, polyamory, HIV status, or any other personal information to employer, parents, friends, teachers, community, the press, etc.; using the survivor’s sexual orientation or gender identity against them; convincing partner of danger or rejection in reaching out or interacting with others in their communities; convincing the survivor that no one will help them because they are LGBTQ; telling them that they are “too _____ (gay, masculine, feminine, etc),” or “not _______(gay, masculine, feminine, etc) enough.”

To block the survivor from using the service. To find out information about the survivor. To gain the benefits of a service (housing, aide, validation, etc.). To find the survivor in a shelter or a support group. To convince the survivor that the survivor is the abusive partner. To validate their perception that they are being victimized.

Differences from Straight Domestic Violence (where neither partner is transgender): 

LGBTQ communities largely do not identify partner abuse as a community issue which increases isolation for survivors. The survivor is likely to have the same support systems, such as friends and social spaces, as the abuser. Leaving their partner may mean they lose their community. Internalized homo/bi/transphobia increases the selfblame of the survivor. The abuser and/or others may blame the survivor’s sexual and/or gender identity for the abuse. Lack of visibility of LGBTQ individuals means that there are few role models for relationships. With little to no societal validation of LGBTQ people in a survivor’s life, people may not even recognize that she/he is in a relationship, much less that abuse is happening. Many people are closeted and cannot turn to friends, family, faith community or employers for support. Homophobia, biphobia, and transphobia do the work for batterers by isolating the survivor, destroying their self-esteem and convincing them that no one will help them because of their sexual orientation and/or gender identity. There is a greater likelihood of no arrest or dual arrest when calling the police and no restraining order or dual restraining orders given by judges. There are fewer resources available for LGBTQ survivors. There is a lack of screening to determine who the abuser is and who the survivor is by police, courts, support groups, shelters and other services.

There may be LGBTQ community pressure not to air dirty laundry about partner abuse or to use the legal system.

Barriers to services for LGBTQ survivors: Because of homophobia, biphobia, transphobia and heterosexism, LGBTQ survivors face several barriers when trying to access services. Some of these barriers include:       

A sense of invisibility in service systems - no mention of LGBTQ partner abuse in most outreach materials. Judgment or homo/bi/transphobia on the part of service providers, or a fear of this type of discrimination. No screening which results in a loss of safety and the possibility of the abuser accessing services. Staff Outing LGBTQ survivors to program participants or other providers. Allowing staff or other participants to harass or insult LGBTQ people with no accountability. Refusing services on the basis of gender identity or perceived gender identity. No knowledge of LGBTQ communities by service providers.

Examples of barriers: The following list provides real life scenarios of barriers that LGBTQ survivors have faced when trying to access services. Imagine yourself in their shoes:

You are a gay man fleeing your abuser. You call for emergency shelter and are told that the only programs that have space do not take men. Your only option is a homeless shelter where you fear you will be harassed and targeted for being gay.

Your partner attacks you and you call the police. You are both women and the police don’t know who the abuser is. They arrest you because you are more masculine-looking than your partner and they assume you must be the abusive partner.

You are a transgender woman. When calling for shelter, you are repeatedly asked to describe what your genitals look like and asked invasive questions about your body like, “Have you had the surgery?” in order to see if you are eligible for the program. Because you are desperate to get away from your abuser, you decide to answer the questions, but are refused services based on your answers.

The emergency room staff let your abuser stay with you during your exam because she is a woman and they don’t recognize her as an abuser. When the doctor asks you how you were injured, she eyes you threateningly and you are afraid to say what really happened.

You lose your job because your abuser tells your boss that you are queer.

You are a gay man seeking a restraining order. At the hearing, the judge tells you and your abusive partner that, “you boys need to settle this on your own.”

You are fleeing your abuser and looking for a place to stay. Your family refuses to take you in because you are bisexual and they don’t agree with your “lifestyle choices.”

You are a transgender man. You’re doctor refuses to use the pronouns and name that you chose for yourself. When your partner assaults you, you have to choose between seeing a transphobic healthcare provider or not receiving care.

You have been parenting your abuser’s biological children for 8 years. If you leave your abusive partner you are afraid you will have no rights to custody and may never see them again.

You enter an all women’s domestic violence support group. They do not screen participants and two weeks into the group your abuser joins.

You are a transgender woman. You are afraid to call the police for fear that they will arrest both you and the abuser and put you in a cell with men where you will be unsafe and possibly the target of violence.

For more information, support, or training on working with LGBTQ survivors please contact The Network/La Red’s technical assistance coordinator at: 617-695-0877 or strategize@tnlr.org

This short fact sheet on partner abuse in LGBTQ relationships covers facts and myths, tactics, how LGBTQ partner abuse differs from other types of domestic violence, and gives an explanation of the cycle of violence.