Power and Control in Lesbian, Gay, Transgender and Bisexual Relationships 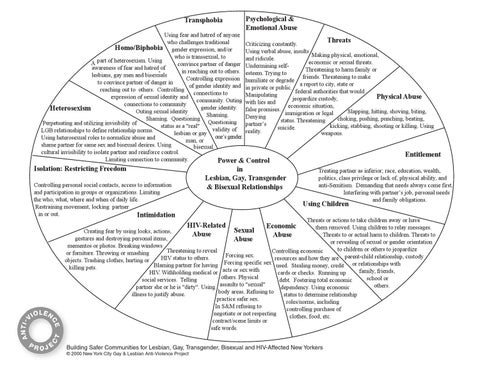 Controlling personal social contacts, access to information and participation in groups or organizations. Limiting the who, what, where and when of daily life. Restraining movement, locking partner in or out. Intimidation

Threats or actions to take children away or have them removed. Using children to relay messages. Sexual Creating fear by using looks, actions, Threats to or actual harm to children. Threats to gestures and destroying personal items, Abuse or revealing of sexual or gender orientation mementos or photos. Breaking windows to children or others to jeopardize Threatening to reveal Controlling economic or furniture. Throwing or smashing Forcing sex. HIV status to others. resources and how they are parent-child relationship, custody objects. Trashing clothes, hurting or Forcing specific sex Blaming partner for having used. Stealing money, credit or relationships with killing pets. acts or sex with family, friends, HIV. Withholding medical or cards or checks. Running up others. Physical school or social services. Telling debt. Fostering total economic assaults to &quot;sexual&quot; others. partner she or he is &quot;dirty&quot;. Using dependency. Using economic body areas. Refusing to illness to justify abuse. status to determine relationship practice safer sex. roles/norms, including In S&amp;M refusing to controlling purchase of negotiate or not respecting clothes, food, etc. contract/scene limits or safe words.

Power and Control in Lesbian, Gay, Transgender and Bisexual Relationships

This "power and control wheel" specifies the tactics that may be used by abusers of LGBT people.