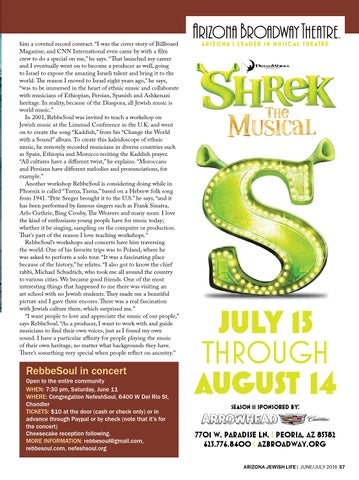 him a coveted record contract. “I was the cover story of Billboard Magazine, and CNN International even came by with a film crew to do a special on me,” he says. “That launched my career and I eventually went on to become a producer as well, going to Israel to expose the amazing Israeli talent and bring it to the world. The reason I moved to Israel eight years ago,” he says, “was to be immersed in the heart of ethnic music and collaborate with musicians of Ethiopian, Persian, Spanish and Ashkenazi heritage. In reality, because of the Diaspora, all Jewish music is world music.” In 2001, RebbeSoul was invited to teach a workshop on Jewish music at the Limmud Conference in the U.K. and went on to create the song “Kaddish,” from his “Change the World with a Sound” album. To create this kaleidoscope of ethnic music, he remotely recorded musicians in diverse countries such as Spain, Ethiopia and Morocco reciting the Kaddish prayer. “All cultures have a different twist,” he explains. “Moroccans and Persians have different melodies and pronunciations, for example.” Another workshop RebbeSoul is considering doing while in Phoenix is called “Tzena, Tzena,” based on a Hebrew folk song from 1941. “Pete Seeger brought it to the U.S.” he says, “and it has been performed by famous singers such as Frank Sinatra, Arlo Guthrie, Bing Crosby, The Weavers and many more. I love the kind of enthusiasm young people have for music today; whether it be singing, sampling on the computer or production. That’s part of the reason I love teaching workshops.” RebbeSoul’s workshops and concerts have him traversing the world. One of his favorite trips was to Poland, where he was asked to perform a solo tour. “It was a fascinating place because of the history,” he relates. “I also got to know the chief rabbi, Michael Schudrich, who took me all around the country to various cities. We became good friends. One of the most interesting things that happened to me there was visiting an art school with no Jewish students. They made me a beautiful picture and I gave three encores. There was a real fascination with Jewish culture there, which surprised me.” “I want people to love and appreciate the music of our people,” says RebbeSoul. “As a producer, I want to work with and guide musicians to find their own voices, just as I found my own sound. I have a particular affinity for people playing the music of their own heritage, no matter what backgrounds they have. There’s something very special when people reflect on ancestry.”

RebbeSoul in concert Open to the entire community WHEN: 7:30 pm, Saturday, June 11 WHERE: Congregation NefeshSoul, 6400 W Del Rio St, Chandler TICKETS: $10 at the door (cash or check only) or in advance through Paypal or by check (note that it’s for the concert) Cheesecake reception following. MORE INFORMATION: rebbesoul@gmail.com, rebbesoul.com, nefeshsoul.org Three rings and one family equals The Greatest Show on Earth. Where have all the elephants gone? The Orchard PHX – An oasis in the desert. N...

Three rings and one family equals The Greatest Show on Earth. Where have all the elephants gone? The Orchard PHX – An oasis in the desert. N...