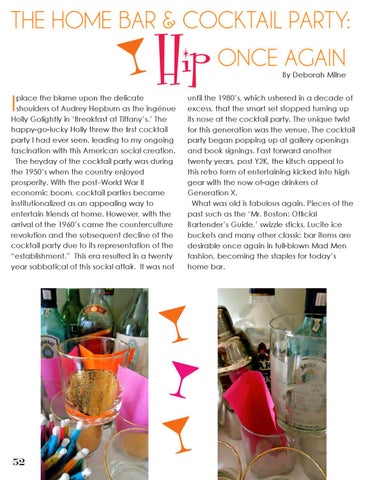 place the blame upon the delicate shoulders of Audrey Hepburn as the ingénue Holly Golightly in ‘Breakfast at Tiffany’s.’ The happy-go-lucky Holly threw the first cocktail party I had ever seen, leading to my ongoing fascination with this American social creation. The heyday of the cocktail party was during the 1950’s when the country enjoyed prosperity. With the post–World War II economic boom, cocktail parties became institutionalized as an appealing way to entertain friends at home. However, with the arrival of the 1960’s came the counterculture revolution and the subsequent decline of the cocktail party due to its representation of the “establishment.” This era resulted in a twenty year sabbatical of this social affair. It was not

until the 1980’s, which ushered in a decade of excess, that the smart set stopped turning up its nose at the cocktail party. The unique twist for this generation was the venue. The cocktail party began popping up at gallery openings and book signings. Fast forward another twenty years, post Y2K, the kitsch appeal to this retro form of entertaining kicked into high gear with the now of-age drinkers of Generation X. What was old is fabulous again. Pieces of the past such as the ‘Mr. Boston: Official Bartender’s Guide,’ swizzle sticks, Lucite ice buckets and many other classic bar items are desirable once again in full-blown Mad Men fashion, becoming the staples for today’s home bar. 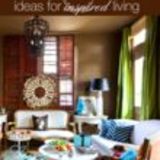