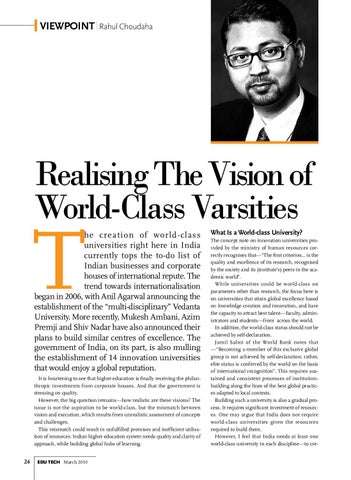 Realising The Vision of World-Class Varsities

he creation of world-class universities right here in India currently tops the to-do list of Indian businesses and corporate houses of international repute. The trend towards internationalisation began in 2006, with Anil Agarwal announcing the establishment of the “multi-disciplinary” Vedanta University. More recently, Mukesh Ambani, Azim Premji and Shiv Nadar have also announced their plans to build similar centres of excellence. The government of India, on its part, is also mulling the establishment of 14 innovation universities that would enjoy a global reputation. It is heartening to see that higher education is finally receiving the philanthropic investments from corporate houses. And that the government is stressing on quality. However, the big question remains—how realistic are these visions? The issue is not the aspiration to be world-class, but the mismatch between vision and execution, which results from unrealistic assessment of concepts and challenges. This mismatch could result in unfulfilled promises and inefficient utilisation of resources. Indian higher education system needs quality and clarity of approach, while building global hubs of learning.

What Is a World-class University? The concept note on innovation universities provided by the ministry of human resources correctly recognises that—“The first criterion… is the quality and excellence of its research, recognised by the society and its (institute’s) peers in the academic world”. While universities could be world-class on parameters other than research, the focus here is on universities that attain global excellence based on knowledge creation and innovation, and have the capacity to attract best talent—faculty, administrators and students—from across the world. In addition, the world-class status should not be achieved by self-declaration. Jamil Salmi of the World Bank notes that —“Becoming a member of this exclusive global group is not achieved by self-declaration; rather, elite status is conferred by the world on the basis of international recognition”. This requires sustained and consistent processes of institutionbuilding along the lines of the best global practices adapted to local contexts. Building such a university is also a gradual process. It requires significant investment of resources. One may argue that India does not require world-class universities given the resources required to build them. However, I feel that India needs at least one world-class university in each discipline—to cre-