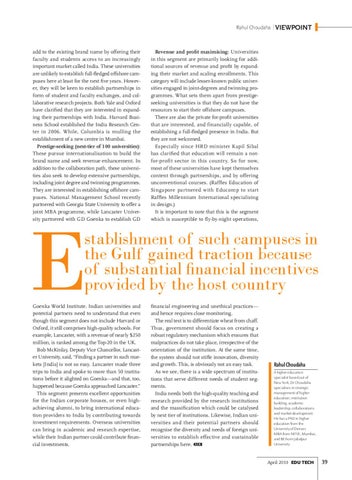 add to the existing brand name by offering their faculty and students access to an increasingly important market called India. These universities are unlikely to establish full-fledged offshore campuses here at least for the next five years. However, they will be keen to establish partnerships in form of student and faculty exchanges, and collaborative research projects. Both Yale and Oxford have clarified that they are interested in expanding their partnerships with India. Harvard Business School established the India Research Center in 2006. While, Columbia is mulling the establishment of a new centre in Mumbai. Prestige-seeking (next-tier of 100 universities): These pursue internationalisation to build the brand name and seek revenue enhancement. In addition to the collaboration path, these universities also seek to develop extensive partnerships, including joint degree and twinning programmes. They are interested in establishing offshore campuses. National Management School recently partnered with Georgia State University to offer a joint MBA programme, while Lancaster University partnered with GD Goenka to establish GD

Revenue and profit maximising: Universities in this segment are primarily looking for additional sources of revenue and profit by expanding their market and scaling enrollments. This category will include lesser-known public universities engaged in joint-degrees and twinning programmes. What sets them apart from prestigeseeking universities is that they do not have the resources to start their offshore campuses. There are also the private for-profit universities that are interested, and financially capable, of establishing a full-fledged presence in India. But they are not welcomed. Especially since HRD minister Kapil Sibal has clarified that education will remain a notfor-profit sector in this country. So for now, most of these universities have kept themselves content through partnerships, and by offering unconventional courses. (Raffles Education of Singapore partnered with Educomp to start Raffles Millennium International specialising in design.) It is important to note that this is the segment which is susceptible to fly-by-night operations,

Goenka World Institute. Indian universities and potential partners need to understand that even though this segment does not include Harvard or Oxford, it still comprises high-quality schools. For example, Lancaster, with a revenue of nearly $250 million, is ranked among the Top-20 in the UK. Bob McKinlay, Deputy Vice Chancellor, Lancaster University, said, “Finding a partner in such markets [India] is not so easy. Lancaster made three trips to India and spoke to more than 50 institutions before it alighted on Goenka—and that, too, happened because Goenka approached Lancaster.” This segment presents excellent opportunities for the Indian corporate houses, or even highachieving alumni, to bring international education providers to India by contributing towards investment requirements. Overseas universities can bring in academic and research expertise, while their Indian partner could contribute financial investments.

financial engineering and unethical practices— and hence requires close monitoring. The real test is to differentiate wheat from chaff. Thus, government should focus on creating a robust regulatory mechanism which ensures that malpractices do not take place, irrespective of the orientation of the institution. At the same time, the system should not stifle innovation, diversity and growth. This, is obviously not an easy task. As we see, there is a wide spectrum of institutions that serve different needs of student segments. India needs both the high-quality teaching and research provided by the research institutions and the massification which could be catalysed by next tier of institutions. Likewise, Indian universities and their potential partners should recognise the diversity and needs of foreign universities to establish effective and sustainable partnerships here.