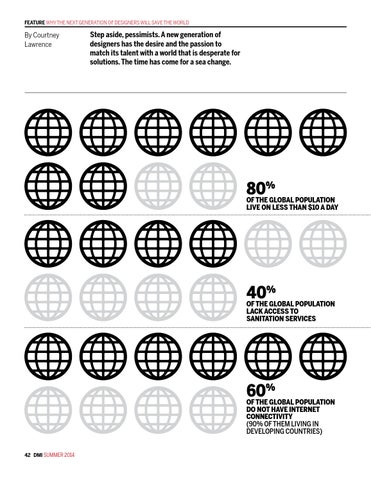 Feature Why the Next Generation of Designers Will Save the World

Step aside, pessimists. A new generation of designers has the desire and the passion to match its talent with a world that is desperate for solutions. The time has come for a sea change.

% 80 of the global population

% 40 of the global population lack access to sanitation services

d l r o W W hat do designers have to do with sustainable development? In a world in which harsh global realities dominate massmedia meta-narratives, it is not uncommon to feel despair or anxiety about what lies ahead for humanity. The gargantuan intergovernmental institutions that outlined bold objectives to save the planet over the past 30 years are running short against their own agendas and timelines. The eight 2015 United Nations Millennium Development Goals (MDG)â&amp;#x20AC;&amp;#x201D;eradicating extreme hunger and poverty, for exampleâ&amp;#x20AC;&amp;#x201D;are far from being achieved. Furthermore, grim statistics (albeit fallible and always subject to scrutiny) indicate that 80 percent of the global population live on less than $10 a day, 40 percent lack access to sanitation services, and 4.4 billion people

Feature Why the Next Generation of Designers Will Save the World Notes 1. J Statistics attributed to the Global Heritage Fund, the Bill and Melinda Gates Foundation, and the British Broadcasting Corp. (BBC).

3. Indeed, there are currently more people living inside Asia than outside it.

do not have internet connectivity (90 percent of them living in developing countries).1 Today, 50 percent of the world population is under 30 years of age2 and Africa and Asia, in terms of GDP and population growth, are the fastest-growing regions in the world.3 The countries composing these two continents are also characterized by massive economic inequalities and dramatic social ills that dominate the dialogue of international development. Of course, the Middle East, the Americas, and Europe are experiencing some of these challenges too. All in all, it’s hard to imagine what the twenty-first century will bring when economic, social, environmental, and political instabilities threaten the path toward prosperity.

pressing and haunting challenges. This is not a brand-new story, but an evolving one. Today, the global development discourse is fast-tracking quickly from version 1.0 (international and intergovernmental aid structures) to version 2.0 (collaborative partnerships and new sectors forged by social enterprise and business) to the subject of this essay—version 3.0 (universalized social-impact designers). How will design become democratized, and who will be at the helm driving the change?

Those trained in the principles of design and of leveraging collaboration, empathy, and ethnography to uncover needs will be best Should we be worried? positioned for success in tomorrow’s knowledge On the contrary. The world we exist in today was and idea-based economy. Design thinking, often not created by design. Over the course of history, referred to as a tool, mindset, or methodology for disparate centers of power and influence have systems or product design, is ever-more-often shaped a spectrum of realities that have produced championed as one avenue to catalyze social everything from utopias to, well, dystopias; and innovation. As Geoff Mulgan of the National the aggregate outcomes are illustrated by the Endowment for Science Technology and the Arts statistics noted above. Yet the conversation takes a (NESTA) has written: turn here. Never before has humanity, as a unified — collective, had more opportunity to collaborate The starting point for innovation is an idea of a need and drive intentional, systemic change. that isn’t being met, coupled with an idea of how Although economies of industry, it could be met…[and there is a] cultural basis for service, and manufacturing will social innovation—the combination of exclusion, never completely disappear, the resentment, passion, and commitment that make new economies of knowledge social change possible. and ideas are becoming ­ — ever more prescient and The time is ripe for a sea change in twentycentral to the dialogue of first-century leadership driven by an empowered sustainable development population of the compassionate and educated —a conversation anchored and young—that is, students of design thinking, of Millennials would take in striving to harmonize students who constitute tomorrow’s practitioner a 15% paycut to work with the triple bottom line base. Why so much confidence in this untested organizations whose of social, economic, and demographic? As someone who has been actively values align with their own environmental priorities. researching and teaching social innovation and In fact, it will be the next impact design to university students (across Asia, generation of mainstream Africa, the Middle East, and the Americas), who human-centered social-impact has worked with Ashoka Innovators for the Public designers who unlock, re-imagine, and the governance leadership of the World and create solutions to the most Alliance of YMCAs (a youth-based NGO that

Feature Why the Next Generation of Designers Will Save the World 4. N et Impact, “Talent Report: What Workers Want in 2012” (online at https://netimpact.org), p.3.

spans 122 countries), I see much evidence that today’s young people will bring design-driven sustainable development into the mainstream. Character, culture, and the young digerati Those born in 1995 and after are still of school age, but it is this demographic that is best positioned to realize the most wide-scale social impact, thanks to their pioneering predecessors, the millennials (young people born from the early ’80s to mid-’90s) who are paving the way now and reconfiguring the parameters of an emerging purpose-driven economy that will become the norm in years to come. According to a 2012 study,4 58 percent of millennials would take a 15 percent paycut to work with organizations whose values align with their own. What about the next generation? Seventy-two percent of today’s students, compared with 53 percent of employed workers, rank having an impact-related job as a top priority, following only financial security and marriage. Tangential to the discussion of what motivates the next generation is the evolving digital landscape redefining global culture and financial markets. Despite the lack of efficient or affordable internet connectivity facing many, those who are growing up wired are the new digital natives, comfortable and efficient managing various tech platforms. Facebook and Twitter have become hallmark common denominators for communication. Not surprisingly, many secondary and university classrooms today are teaching students how to leverage social media, cloud-based collaboration tools, and mobile phone apps and how to design their own websites, blogs, and videos. Every aspiring social innovator, designer, and entrepreneur now has the tools to scaffold his or her dream into a reality. Add crowd-sourced financing into the mix (Kickstarter and the like), and one can appreciate how this expanding toolbox of digital resources is empowering

of Today&#39;s Students, Compared with 53% of employed workers, rank having an impact-related job as a top priority

young people everywhere to effect the kind of change they wish to see. Global business complexity and job market sophistication There is an increasing demand for a skilled workforce of creative problem-solvers who exhibit the ability to generate bolder, more effective, and meaningfully grounded ideas. Those trained in design thinking will have a competitive advantage in the job market as the principles of effectively uncovering user needs, problem-solving, and cultivating empathy as a tool for communication become recognized as non-negotiable leadership skills. The head of Google’s human resources department, Laszlo Bock, recently shared that the first thing the hiring team looks for in a candidate is “the ability to learn things and solve problems […] and understand and apply information.”5 Other interesting external factors that will accelerate the unfolding of the design-driven era in business—beyond the designers themselves— include the rise of consumer demand for socially responsible products, a maturation of the socialinnovation ecosystem (that is, resources to scale), DMI SUMMER 2014 45

Feature Why the Next Generation of Designers Will Save the World Notes 6. Registration numbers courtesy of IDEO’s community manager, in a personal email from 4/24/14.

Courtney Lawrence is a Japanbased university lecturer and founding director of the HJU Global Studies, Peace and Leadership Summer Seminar, a program that has included fieldwork with students from more than 40 countries to India, Thailand, Cambodia, and the Philippines. Her academic research area focuses

and a strategic cross-cutting expansion of R&amp;D departments embedded, not siloed, within larger organizations.

on the intersection of sustainable economic development, social enterprise and design thinking. Lawrence serves on the executive committee of the Swiss-based, NGO World Alliance of YMCAs. Previous to co-founding a US social enterprise in 2011, she worked with Ashoka’s Full Economic Citizenship and has facilitated multiple

trainings across Asia, the Middle East, Africa, Europe and North and South America. She holds a master’s degree in sustainable economic development and responsible management from the United Nations Graduate School of Peace and Conflict Studies and has lived, worked, and traveled across nearly 50 countries.

Social-impact design will spring from the grassroots

No, the journey to save the world and generate systemic social impact by design will not Trends in academia and civic collaborations. emerge overnight; yet the seeds are already Although standard brick-and-mortar institutions planted to move from the cusp to the center of higher education will most likely remain a of the sustainable development agenda. Just mainstay, there is no doubt that online, fieldas critical to the debate is the emphasis on based, and informal education structures are human-centered design, rooted in empathy becoming more accessible and valuable— and user-centered research, which assures especially in the social-impact and designthat well-intentioned wishes have a check and thinking arena. Consider +Acumen’s online balance system and that vulnerable populations Human Centered Design for Social Innovation without access to resources are partners in cocourse (a partnership with IDEO.org). In the creation, not victims. As for implementation, past two years, 25,000 registrants from 148 it will be tomorrow’s practitioners (now today’s countries have signed up.6 Within traditional students in all corners of the world) who will academic settings, too, design studios and labs be driving these changes—because they are are popular with the 18- to 22-year-old crowd, intrinsically motivated and trained, and because as evidenced by organizations like Design for the needs of a global society will see to it that America, programs such as the relatively new such problems are re-framed as opportunities. Design for Social Innovation MFA program at Businesses, governments, and civil society will New York’s School for Visual Arts, and anchor soon speak the language of design—even if they institutions such as the Hasso Plattner Institute are motivated by contrasting agendas. of Design at Stanford University (the d.school), where rolling out “creative confidence” across the campus is quickly becoming a chief priority with the academic administration, who see design thinking as a competitive advantage to cultivate within students. This phenomenon is not constrained by geography, language, or culture— examples include Thailand-based Thammasat University’s new design initiative, the G Lab, as well as the UN Mandated UPEACE Centre for Executive Education’sfield-based course in social innovation design in Phnom Penh and Bangkok. 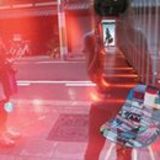