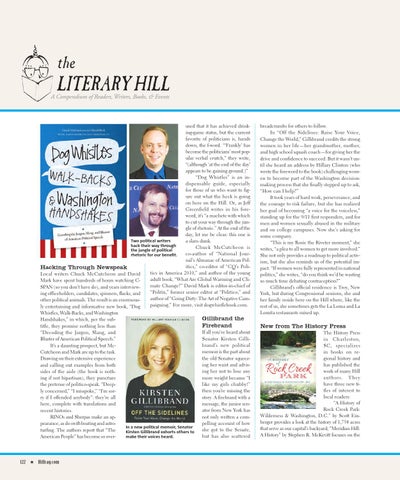 used that it has achieved drinking-game status, but the current favorite of politicians is, hands down, the f-word. “‘Frankly’ has become the politicians’ most popular verbal crutch,” they write, “(although ‘at the end of the day’ appears to be gaining ground.)” “Dog Whistles” is an indispensable guide, especially for those of us who want to figure out what the heck is going on here on the Hill. Or, as Jeff Greenfield writes in his foreword, it’s “a machete with which to cut your way through the jungle of rhetoric.” At the end of the day, let me be clear: this one is Two political writers a slam dunk. hack their way through Chuck McCutcheon is the jungle of political co-author of “National Jourrhetoric for our beneﬁt. nal’s Almanac of American Politics,” co-editor of “CQ’s PoliHacking Through Newspeak tics in America 2010,” and author of the young Local writers Chuck McCutcheon and David adult book, “What Are Global Warming and CliMark have spent hundreds of hours watching Cmate Change?” David Mark is editor-in-chief of SPAN (so you don’t have do), and years interview“Politix,” former senior editor at “Politico,” and ing officeholders, candidates, spinners, flacks, and author of “Going Dirty: The Art of Negative Camother political animals. The result is an enormouspaigning.” For more, visit dogwhistlebook.com. ly entertaining and informative new book, “Dog Whistles, Walk-Backs, and Washington Handshakes,” in which, per the subtitle, they promise nothing less than “Decoding the Jargon, Slang, and Bluster of American Political Speech.” It’s a daunting prospect, but McCutcheon and Mark are up to the task. Drawing on their extensive experience and calling out examples from both sides of the aisle (the book is nothing if not bipartisan), they puncture the pretense of politico-speak. “Deeply concerned,” “I misspoke,” “I’m sorry if I offended anybody”: they’re all here, complete with translations and recent histories. RINOs and Sherpas make an appearance, as do swift-boating and astroturfing. The authors report that “The American People” has become so over-

In a new political memoir, Senator Kirsten Gillibrand exhorts others to make their voices heard.

If all you’ve heard about Senator Kirsten Gillibrand’s new political memoir is the part about the old Senator squeezing her waist and advising her not to lose any more weight because “I like my girls chubby!” then you’re missing the story. A firebrand with a message, the junior senator from New York has not only written a compelling account of how she got to the Senate, but has also scattered

breadcrumbs for others to follow. In “Off the Sidelines: Raise Your Voice, Change the World,” Gillibrand credits the strong women in her life—her grandmother, mother, and high school squash coach—for giving her the drive and confidence to succeed. But it wasn’t until she heard an address by Hillary Clinton (who wrote the foreword to the book) challenging women to become part of the Washington decisionmaking process that she finally stepped up to ask, “How can I help?” It took years of hard work, perseverance, and the courage to risk failure, but she has realized her goal of becoming “a voice for the voiceless,” standing up for the 9/11 first responders, and for men and women sexually abused in the military and on college campuses. Now she’s asking for some company. “This is my Rosie the Riveter moment,” she writes, “a plea to all women to get more involved.” She not only provides a roadmap to political activism, but she also reminds us of the potential impact. “If women were fully represented in national politics,” she writes, “do you think we’d be wasting so much time debating contraception?” Gillibrand’s official residence is Troy, New York, but during Congressional sessions, she and her family reside here on the Hill where, like the rest of us, she sometimes gets the La Loma and La Lomita restaurants mixed up.

New from The History Press The History Press in Charleston, SC, specializes in books on regional history and has published the work of many Hill authors. They have three new titles of interest to local readers: “A History of Rock Creek Park: Wilderness &amp; Washington, D.C.” by Scott Einberger provides a look at the history of 1,754 acres that serve as our capital’s backyard; “Meridian Hill: A History” by Stephen R. McKevitt focuses on the

Our flagship publication delivering all of your news from the Capitol Hill area of Washington, DC