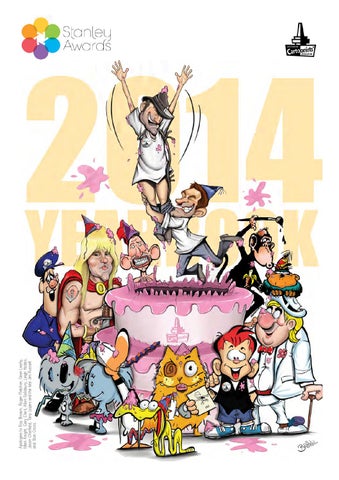 with apologies to Stan Cross

Cover cartoon The winner of the “Cartoon OnThe Night” at the each year’s Stanley Awards is invited to draw the cover cartoon for the Yearbook. Last year’s winner was Grant Brown.

This book is copyright. Apart from any fair dealing for the purposes of private study, research, criticism or review, as permitted under the Copyright Act, no part may be reproduced by any process without written permission. Enquiries should be addressed to the publishers or the cartoonist concerned.

The ACA has endeavoured to provide the correct contact details of artists featured in this publication. Should any detail be incorrect and contact not possible please address your enquiries to the ACA Secretary. The Australian Cartoonists Association PO Box 318 Strawberry Hills, NSW AUSTRALIA 2012 secretary@cartoonists.org.au www.cartoonists.org.au Stanleys logo designed by Stuart Hipwell - www.hippy.com.au Yearbook designed by Chris Barr - www.lonegumstudio.com.au and compiled by Peter Broelman - www.broelman.com.au

Well, another year and another Yearbook. And I must say this year’s looks fantastic in colour, just as it did last year. And it’s been another one of those years! In terms of political cartooning, any let up we thought might happen after the Rudd-GillardRudd years proved a no-show with Tony Abbott and his gang enjoying just as much attention from our amazing political cartoonists. In fact, I’d hazard a guess at saying this latest government has enjoyed the richest bonanza that Australian cartooning has ever had to offer. And at the time of writing, that doesn’t look like letting up. If one thing can be said for Australian politics, it’s that we’ll never be short of subjects. The only thing is now these guys have started writing the scripts themselves! All we need to do is furiously scribble to keep up. And keep up we have as you’ll see in our Editorial/Political artooning section. Like all our sections, this is devoted solely to editorial and political cartoons and is always very popular. Our other categories include Caricaturist, Comic Strip Cartoonist, Comic Book Artist, Single Gag Cartoonist and Illustrator. But hold the phone! We also have a brand spankin’ new award this year – The Stanley Award for Animation Cartoonist! Yes, that’s right; at long last we are recognising animation in our annual awards and, speaking as an ex-animator myself, not before time! I think you’ll agree the quality of entrants here is simply magnificent. It’s gonna be a hard decision that’s for sure. On that subject, be sure you vote correctly. I know that sounds dumb to have to say, but each year our good mates at KPMG tell us they don’t always get all the Voting Forms that were sent out and some are informally filled in, rendering them invalid. Make sure you choose three cartoonists from each section and place them in the according part of the Voting Form. This is the major purpose of the Voting Book you now hold in your hands! Don’t waste your opportunity to have your say in who takes home the gongs! KPMG have been our friends in helping us with the votes each year and they keep things

completely outside of us when it comes to voting. They are just one of a handful of brilliant and supportive folk who sponsor us each year in doing what we do and we couldn’t do it without them. They are: The Herald Sun, The Australian, Copyright Agency/Viscopy, the Media, Entertainment and Arts Alliance, Wacom, Supanova and Media Super. On behalf of the ACA I’d like to say a massive thank you to all these fine folk and extend a warm welcome to Media Super and Supanova who have joined The Stanley Awards for the first time. That might do me for now. I’m hanging to get into this book and begin the arduous process of choosing who gets my vote. Remember that the ACA exists for peer support and the Stanleys are our most public means of showing that support in recognising our best. So make your vote count and get it into the mail pronto! So quit reading this and get into it!

“Everything starts with a dot.”

Welcome to the 30th Yearbook!

Animation Cartoonist Sponsored by Supanova An artist who is the original modeler, illustrator or cartoonist of the assets of a short animated piece for online broadcast, television, film, interactive digital products and motion comic. Only members whose work is represented in this book are eligible for the Animation Cartoonist Award. ACA members - please visit the websites provided to view the animation before casting your vote.

New Award Art in the Editorial / Political Cartoonist section displaying this logo are non-competitive entries and are published for the enjoyment of ACA members.

KPMG is a proud sponsor of the Animation Cartoonist Stanley Award. Good luck to all nominees.

The Animation Cartoonist category is a new Stanley Award to recognise cartoonists who animate their own work. ACA members should view these animations online where possible before casting their votes.

Art in the Editorial / Political Cartoonist section displaying this logo are non-competitive entries and are published for the enjoyment of ACA members.

A cartoonist whose published body of work is primarily a multi-panel sequential comic cartoon strip, adventure or illustrated comic strip.

Art in the Comic Strip Cartoonist section displaying this logo are non-competitive entries and are published for the enjoyment of ACA members.

Illustrator Sponsored by Wacom An artist whose published body of work is humorous and general illustration for newspapers, magazine, books, advertising and online.

Art in the Illustrator section displaying this logo are non-competitive entries and are published for the enjoyment of ACA members.

We love your work!

INSIDE THE MEDIA IN AUSTRALIA AND NEW ZEALAND

Single Gag Cartoonist Sponsored by The Walkley Foundation/MEAA A cartoonist whose published body of work is a primarily single frame, non-editorial/political landscape or portrait panel gags.

The Walkley Magazine – Inside the media in Australia and New Zealand would like to thank all the cartoonists and illustrators who have helped make it Australia’s premier media magazine. Four times a year and in full colour, The Walkley Magazine reaches over 8000 journalists, artists and subscribers. It’s the only forum for discussion of media and professional issues by and for journalists.

The Walkley Foundation and MEAA congratulate all the winners of the 2014 Stanley Awards, and we look forward to supporting you (and publishing your work!) in the future. We couldn’t do what we do without you, and we love your work. For more on The Walkley Magazine, including how to subscribe, contribute or advertise, see walkleys.com.

Caricaturist Sponsored by The Australian A cartoonist whose published body of work is caricatured likeness.

“Everything starts with a dot.” WASSILY KANDINSKY

The Australian is honoured to sponsor the Caricaturist Stanley Award. Congratulations to all nominees at the 30th Stanley Awards.

Comic Book Artist Sponsored by Copyright Agency|Viscopy An artist whose published body of work consists primarily of sequential art drawn with the intention of conveying information and or telling a story to the reader in the form of comic books (periodicals/‘floppies’), graphic novels, adventure cartoon strips with serial content and zines (containing sequential art content).

STANDING UP FOR AUSTRALIAN CARTOONISTS We’re a not-for-profit organisation that collects licence fees for the legal reproduction of works by Australian and New Zealand cartoonists and illustrators. So when others want to publish your work, we work to make sure you are fairly paid. We do this to sustain Australia’s creative industries and encourage original expression of ideas. Copyright is automatic and membership is free. Find out more at www.copyright.com.au Stanley Awards | Yearbook 2013

THE STAN CROSS AWARD FOR CARTOONIST OF THE YEAR

ELIGIBILITY • To be eligible in any category, including “Cartoonist of the Year”, a cartoonist must be a financial full member of the Australian Cartoonists’ Association. • All artwork must have been originally published between July 1, 2013 and August 30, 2014. • All artwork must meet the criteria of the category as described at the start of each section of the Year Book. • Eligible members are permitted to enter two categories only. • The cartoonist must be represented in this Year Book - members whose work is not displayed or who display a not in competition logo are not eligible for a Stanley Award. JUDGING PROCEDURE • All financial full members are eligible to vote. • All voting must be completed only on the official ballot form supplied with this Year Book. • The Stanley Awards ballot form must be returned by the date designated on the ballot form and must be addressed to:

• Members are asked to vote 1, 2 or 3 in order of preference in each category. • Participating members casting their votes MUST  fill in all categories and all preferences. Preference lines left blank will result in the whole voting form being declared invalid. • Cartoonists receiving a first preference vote will receive 5 (five) points, a second preference will receive 3 (three) points, and a third preference 1 (one) point. The cartoonist with the most points in a category will receive the award. • In the event of a draw, the cartoonist receiving the most first preferences in the category will receive the award. • Ballot results will be tabulated by our independent arbiter, KPMG, whose declaration will be final. No correspondence will be entered into. • Ballot forms received after the nominated closing date will not be considered in the tabulation.

THE AUSTRALIAN CARTOONIST OF THE YEAR - GOLD STANLEY AWARD • Regardless of the category or categories entered, all cartoonists in the 2014 Year Book are eligible to be voted as the Cartoonist of the Year. • Cartoonists receiving a first preference vote will receive 5 (five) points, a second preference will receive 3 (three) points, and a third preference 1 (one) point - the cartoonist with the most points in a category will be the recipient of the award. In the event of a draw, the cartoonist receiving the most first preferences in the category will be the recipient of the award.

CONTRIBUTION TO CARTOONING - THE JIM RUSSELL AWARD Nominations are invited by the committee of the Australian Cartoonists’ Association for individuals or corporations considered by the nominator to have contributed the most to, or advanced the cause of Australian cartooning. The committee will make the award from the nominations received. Nominees for the Jim Russell Award need not be members of the Australian Cartoonists’ Association or have work in the Year Book. All financial full members are invited to write to the President and Board and nominate an individual or organization they believe are deserving of the Jim Russell Award. Nominations with appropriate supporting documentation should addressed to:

In 2014 the Cartoonist of the Year Award is sponsored by

Closing date for 2014 votes and nominations is Monday 3rd November, 2014

Are you on the ACA members email list? The ACA sends out regular emails. Check your spam folder if you’re not getting them or let us know of any changes.

For gorsake, stop laughing: this is serious! 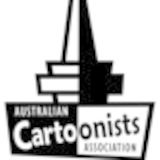 The 2014 Year Book, published by the Australian Cartoonists Association, is the cornerstone of the 30th Stanley Awards and features the grea...

The 2014 Year Book, published by the Australian Cartoonists Association, is the cornerstone of the 30th Stanley Awards and features the grea...