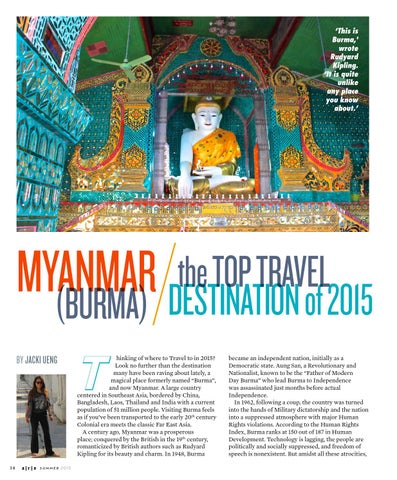 ‘This is Burma,&#39; wrote Rudyard Kipling. ‘It is quite unlike any place you know about.’

the TOP TRAVEL MYANMAR (BURMA) DESTINATION of 2015 BY JACKI UENG

hinking of where to Travel to in 2015? Look no further than the destination many have been raving about lately, a magical place formerly named “Burma”, and now Myanmar. A large country centered in Southeast Asia, bordered by China, Bangladesh, Laos, Thailand and India with a current population of 51 million people. Visiting Burma feels as if you’ve been transported to the early 20th century Colonial era meets the classic Far East Asia. A century ago, Myanmar was a prosperous place; conquered by the British in the 19th century, romanticized by British authors such as Rudyard Kipling for its beauty and charm. In 1948, Burma

became an independent nation, initially as a Democratic state. Aung San, a Revolutionary and Nationalist, known to be the “Father of Modern Day Burma” who lead Burma to Independence was assassinated just months before actual Independence. In 1962, following a coup, the country was turned into the hands of Military dictatorship and the nation into a suppressed atmosphere with major Human Rights violations. According to the Human Rights Index, Burma ranks at 150 out of 187 in Human Development. Technology is lagging, the people are politically and socially suppressed, and freedom of speech is nonexistent. But amidst all these atrocities,

Volume 7, Issue 2 - Life Beyond the Gateways: Asian Immigration in the 21st Century 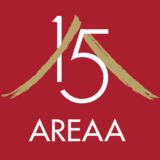